A bunch of people on Twitter got very wound up when, after all the frothing excitement about David Bowie’s comeback single ‘Where Are We Now’ suddenly appearing out of nowhere, it didn’t actually go to number one. This was because a large amount of the downloads were sold as part of a bundle including a pre-order of his new album, making them ineligible for the Official Chart. After a slightly pathetic uproar (pretty sure Bowie himself didn’t give a toss seeing as he was raking it in anyway), the Official Chart Company has re-adjusted its rules so this sort of outrage can never occur again. What a relief. 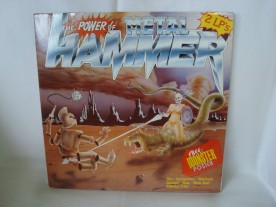 A new media company headed by former radio executive John Myers has snapped up two rock mags from Future Publishing: Classic Rock and Metal Hammer. The business, called TeamRock, reckons there's a "large but under-served community" of rock fans it can cater for. Future Publishing downplayed the loss, issuing the following statement: "Classic Rock and Metal Hammer are highly successful and well-managed parts of Future, but they have not been centre stage in our current growth strategy". Still, if nothing else it proves that, despite the naysayers, there's still an interest in print music journalism...
Read More