…is what you imagine Team Ghost exclaiming roughly every four minutes on their debut album “Rituals”. The French three-piece, which has expanded to five of late, bloody love a crescendo.

Perhaps that’s not surprising considering Head Ghost is former M83 man Nicolas Fromageau (that is French for cheesy, right?). He used to be half of the celebrated electro-shoegaze outfit alongside Antony Gonzales, but left after touring what remains the band’s best album, “Dead Cities, Red Seas & Lost Ghosts”.

It took a while for him to re-emerge – while Gonzales toured the world, Fromageau ended up stuck working shifts in shitty supermarkets, using his spare time to nurture the seed of Team Ghost with former M83 manager Jean-Phillippe Talaga and childhood friend Christophe Guerin. Yet until now there have only been a couple of well-received EPs to show for it. You could say it’s been a long, slow build-up to the release of this, their first long-player (woo! Crescendo!).

While there’s certainly a touch of “Dead Cities…” to “Rituals”, not least the mixture of melancholy atmospheres with massive crescendos (woo! Crescendos!), Team Ghost are definitely a different beast. Indeed, as M83 have steadfastly moved into bright lights and major keys (“sometimes it sounds a bit like Sting,” is Fromageau’s cheeky analysis), Team Ghost tend to plow a lonelier furrow.

Which is not to say the record is in any way downbeat. While opening track ‘Away’ sets the stall out straight away, spreading layers of guitar over a tearfully emotional electronic base, that doesn’t stop it building to a blisteringly intense crescendo (woo! Crescendo!). ‘Curtains’ is similarly hi-octane, with a verse that could soundtrack the dénouement of a superhero flick and a chorus that sounds like the engine of Bono’s Tesla Roadster as it speeds down a coastal road.

Sometimes the more uptempo tracks are slightly wearying. ‘Dead Film Star’ has a great video (see below) but is basically indie disco fodder, while ‘Fireworks’ might as well be titled ‘My First Krautrock Record’. ‘Montreuil’ goes for a more Andreas Dorau meets Aha kind of feel and provides a brilliant burst of sunshine on an otherwise overcast record, but it’s the sort of sunshine that makes you seek out a spot of shade after a couple of minutes.

No, Team Ghost are at their best when conjuring ornamented dynamic shifts. ‘Things Are Sometimes Tragic’ is all pounding toms one minute and delicate tinkling the next, while ‘All We Left Behind’ creates a blub-tastic atmosphere out of low-pitched strings and mournful piano, before shattering everything with a gigantic burst of drums and guitars (woo! Crescendo!). The streamlined post-rock structure suits them very well.

Other highlights include the ‘overdriven guitars vs. xylophone arpeggio’ battle during the inevitable crescendo (woo! Crescendo!) on ‘Team Ghost’, and a typically cheery track about drug addiction entitled ‘Pleasures That Hurt’ which features a vocodered Guerin lamenting “muddled memories that bite before they hit” over a background of quietly malfunctioning electronics, before the volume rises about fifty notches halfway through (woo! etc). Team Ghost are apparently extremely loud when they play live, and you can imagine this being the point where your eardums finally make like Girls Aloud and split.

The best track, however, is the pleasingly perverted ‘Somebody’s Watching’. It has a sordid Pulp vibe to it, with the lyrics reading: “Somebody’s watching / It turns me on / Let’s keep on fucking, baby / Until it comes” (all the vocals are in English as Fromageau insists that: “Except for Stereolab, I can’t think of any band I like who sing in French”). It’s a brilliant track, and there’s a tasty progression when everything but the backing vocals unexpectedly drops out, laying the path for a gradual swell up towards the climax (woo!).

You know the album’s reached it’s conclusion when ‘we Won’t Fail’ features no charged increase in volume at all (boo!), but it’s a pleasant goodbye. M83 may have hit many of the career heights that Fromageau’s new band are still a long way from, but though they’re travelling more slowly you get the sense that Team Ghost could eventually surpass those peaks. Woo! Crescendo! 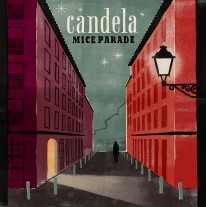 Adam Pierce has been producing music as Mice Parade (it's an anagram, geddit?) for fifteen years now, during which time he's assembled several supremely talented collections of musicians to take his albums out on the road. When recording (he has a studio in his home that has hosted Animal Collective and Frightened Rabbit among others) it's a similar affair; whoever he drags in, even when they're not as well known as Stereolab's Laetitia Sadier or Kristin Valtysdóttir of múm, invariably proves themselves to be pretty damn good. Perhaps it's the fact he's a blinding musician himself that makes others so keen to work with him. An incredible percussionist, he tends to take at least one more on tour with him to fill in while he demonstrates his similarly enviable skills on guitar, or so they can face off against each other on separate kits during rhythmic pissing contests as complicated as they are noisy. Advice: if you appreciate witnessing human beings perform physical and cerebral activities extraordinarily well, catch these guys on tour. "Candela" is the seventh studio Mice Parade album, and a marked improvement on 2010's messy "What It Means to Be Left-Handed", which attempted to do with West African music what 2004's "Obrigado Saudade" managed much better with Brazilian idioms. In this case flamenco music is the soil from which Pierce's fertile creativity grows, with the record taking its name from a lively late-night bar in Madrid that the city's finest gypsy musicians tend to gravitate towards in the small hours. Pierce fits a host of latin themes into Mice Parade's distinctive sound, and for the most part it's pretty seamless. Opening track 'Listen Hear Glide Dear', for instance, feels like a post-rock version of the intro to 'El Condor Pasa' by Los Incas (you know, the one DJ Shadow sampled). The layers of droning feedback and mournful tones provide a beautifully moody start to the album, while the rumbling rhythm is provided by what sounds like a mountain troll slowly descending down a rocky pass. 'Currents' sees the return of Carolina Lufkin on vocals, beginning with a sweetly distorted lullaby and developing into a churning mixture of manic guitar lines and the usual intricate drumbeats, although the percussion patterns that follow on 'This River Has a Tide' are surprisingly simple, at least until a sudden flamenco section shows up. It's that sort of restless musicality that makes Mice Parade such a refreshing tonic to the boring effects-pedal wankery that passes for most post-rock these days, although it's rarely overwhelming here. 'The Chill House' begins with a whining drone and arpeggio combination, with Pierce adding a couple of poly-rhythms before eventually tying everything together with a simple vocal melody and synth line. It's less cluttered than his work can be, which alows you to enjoy each individual facet as they're introduced, draped over the song like so many layers of muslin. The title track then defies convention by probably being the best on the album. A bittersweet song about missed connections in Spain, held together with a solid woodblock pulse, the chord progression is so catchily inventive you could imagine it being adapted by Metronomy, at least until the point where it flames out with a burst of female flamenco wailing. It's a short track, and unusually for Mice Parade there are no particularly long excursions on "Candela". Also unusual, for a band led by a percussionist who used to expressly avoid sampling and other electronic jiggerypokery, is the appearance of a drum machine on 'Look See Dream Me', which plays a humble counterpart to the glistening Dustin Wong-style guitar ripples flying overhead - even if it does kind of make it sound like the soundtrack to an old Sega game (not that that's necessarily a bad thing). After 'Gente Interesante', a gorgeous track that's possibly the most soulful thing they've ever done, the quality drops off severely for the last two tracks. 'Contessa' combines annoyingly chirpy jazz guitar licks with an intentionally sloppy rhythm section (why?) to create something Jack Johnson might come up with after a night binging on Hawaiian fungus, while 'Warm Hand in Narnia' is, contrastingly, a bit too boringly solid, like a Mice Parade take on U2. However, this doesn't detract from a largely joyful record, one that reminds you what a treasure Mice Parade are. Still, while some of the more accessible moments here (and it is probably their most accessible album so far) suggest a late bid for mainstream acclaim, reviews like this one from AbsolutePunk.net (bit of a misnomer that), which claim the main issue with the album is that "it's just too bloody weird", suggest it's probably wishful thinking. It's true that Pierce's talent is of the intelligent, inquisitive sort that tends to lead his creativity down unexpected avenues, but "Candela" takes a pretty conventional journey by his standards. Nonetheless, it remains a record that will reward those who not only stay the distance, but are happy to travel slowly, and take in the scenery.
Read More