When most people hear the word “shredding” they probably associate it with tedious office tasks, destroying files full of implicating evidence or the actions of a masked, turtle-hating psychopath. However, to musos, metal fans and subscribers to Total Guitar magazine, shredding is a guitar-playing technique which usually results in rapid-fire, finger-tapped arpeggios typically performed by musicians like Joe Satriani, Buckethead and Pantera’s late, great Dimebag Darrell.

Aside from The Great Kat, who specialises in speed metal versions of Vivaldi and Rossini, celebrated female shredders were in relatively short supply before Marnie Stern began making waves. I remember hearing her debut single ‘Grapefruit’ in 2007: it burst out of the radio and pummelled me repeatedly in the face before tearing my ears off and using them to mop up the blood. A cacophonous mixture of frenzied rhythms and frazzled guitar replete with Stern’s high-pitched vocals rising ever-upwards, it was a noise I’ve never forgotten.

She provided a similarly exhilarating and punishing experience on her live UK debut, with the incredible Zach Hill (Hella, Death Grips) performing like a man possessed while appearing to have the ability to hit seven drums simultaneously (which is especially impressive seeing as it was only a five-piece kit). However, it was Stern’s personality that shone through, warbling Buster Poindexter’s ‘Hot Hot Hot’ between numbers, talking about how much she missed her dog and hitting the depths of her vocal register in order to phrase an apology for her almost gratingly cute voice.

Three well-received albums later and you find Stern turning up in (and indeed judging) a raft of guitar polls, initially populating the patronising ‘best female guitarist’ lists but more recently competing for greatest guitarist outright (number 87 in last year’s Spin list). Still, plaudits don’t pay the bills, so she’s taken time out from giving guitar lessons and listing plus-size women’s clothing on eBay to release an album that, she reckons, features vocals that are “too clear and just too pop”.

She must have a funny idea about pop, as lead single ‘Year of the Glad’, which opens the superbly-titled new album “The Chronicles of Marnia” (streaming here), features a chorus that sounds like an attempt to mimic a cage full of over-excited chimps. Still, it’s true that tendency to shoot off in a thousand directions at once seems to have been toned down slightly; the crunching riff of ‘You Don’t Turn Down’ features just a single, repeated note. OK, so it’s accompanied by two other more complex riffs layered over the top, but still, by Marnie’s standards that’s practically minimalism.

The track also sees some smart dynamic shifts, Gang Gang Dance-style delayed vocals, and more restrained, but no less impressive, drumming. This is partially due to the absence of Zach Hill, who assumed much of the production work on Stern’s previous records, whereas this is the first to be recorded almost entirely in a proper studio. Still, losing a drummer as talented as Hill is difficult to recover from. Or it would be, at least, if you didn’t happen to have Kid Millions of Oneida on board. He doesn’t try to hit the same levels of polyrhythmic intensity, but the extra space actually allows you to see just how proficient he really is. Seriously, the drumming on this record is astounding.

As, of course, is the guitar work, although Stern is keen to downplay her talents, insisting it takes her hours to come up with each tiny guitar part. Still, while her creative process may be time-consuming, it results in music that’s brimming with complex and challenging ideas; no surprise, then, that ‘Year of the Glad’ is apparently inspired by David Foster Wallace’s literary breezeblock “Infinite Jest”. However, while Stern admits she only “made it, like, three pages into that book,” her songs can be consumed more easily, working as both brief hits of invigorating noise or as vast tracts of musical information that need to be listened to over and over before you can begin to understand everything that’s going on.

Still, if that all sounds a bit intimidating, remember that Marnie Stern’s personality always shines through. ‘Immortals’, for instance, finds her threatening to “come and find ya” in what sounds like a broad West Midlands accent, while ‘Proof of Life’ is built around some very unexpected piano chords (and is rather lovely). She also recently admitted she’d “love to have a song on Guitar Hero because I love to showboat”, although there’s probably not a plastic guitar in existence that could stand more than a couple of runs through her back catalogue.

Stern’s record label, Kill Rock Stars, recently launched a competition to win a date with their flurry-fingered charge (not such a bizarre move seeing as she used to operate a kissing booth on tour), although her apparent discrimination against slackers, drug addicts and vegans and anyone who deosn’t live in New York unfortunately ruled out everyone in our office. We’ve not heard a competition update yet, but a lot of people will certainly fall in love with her the moment they hear ‘The Chronicles of Marnia”. If she’s still single once it’s out then you can safely assume New York’s bachelors are deranged. 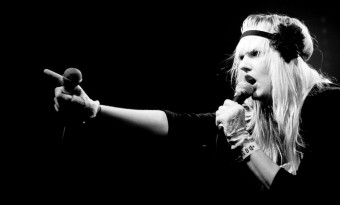 The cover features female fingers in lace gloves running down the edge of a saw that looks like it's seen some action - of what variety, we're unsure. The product inside features guest appearances from possibly the most distinctive male voice in modern music. And its creator has released two previous albums, supported Robert Plant, and regularly performs in front of a backdrop featuring projections of mothers throwing knives at their own daughters. So why, whenever I stick on the latest album from Malmo's Christine Owman, do people keep saying: “Ooh, what's this?”. While that album, “Little Beast”, may seem to have crawled out of nowhere, Owman's actually been around for ages. Her first release was “Open Doors” in 2003, with the richly dark “Throwing Knives” following after a lengthy seven year gap. In between she's mainly composed for theatrical productions in Sweden, the US, Canada and the UK, and it's not hard to see how her experiences in this environment have informed her new album, which is imbued with a restrained but effective sense of drama. This is most evident in songs like 'Wait No', which sees her prostrated as a bare, breathier PJ Harvey. The softness of her vocals shouldn't be mistaken for submission though, as the lyrics may well ring true for anyone who's been prescribed medication for mental health, or knows someone who has, with Owman's delicious harmonies evoking the voices in her own head as she insists she'd “rather cope with my brain than forced to be sane / the medical pain / Rather stay in my brain / be quietly insane / than conventional and plain”. Conventional and plain she most certainly is not; while her music may be low-key, her stage show is anything but. Aside from the obscure cinematic projections, she claims that while she enters the stage with “neat make-up”, by the time she exits she looks “like Alice Cooper. Sticky all over the face” (well, that's how Google translates it anyway. Ahem.). For “Little Beast” she enlisted a man whose stage presence can conversely be described as statuesque; not in the Keira Knightly sense (ha!), but because he barely bloody moves onstage. Still, anyone who's ever watched Mark Lanegan play knows that even when static he has an inimitable intensity. Here, he reprises the gruff Lee Hazlewood role he played so well on his collaborations with Isobel Campbell, which makes the fact he first arrives on a track called 'Familiar Appearance' slightly amusing. The song itself reads like an experimental play, with Owman and Lanegan stuck in a dialogue that could've been written by a Yiddish Samuel Beckett. “Are you disappointed with my answer?” asks Owman. “Am I disappointed with your question?” responds Lanegan. Obviously it's destined to lead nowhere, but it's enjoyable to listen to them not getting there; especially against a boldly sparse backdrop featuring a cello being played like a knife being sharpened. Owman has admitted that if she were a man she'd want to sing like Lanegan, but while her voice is as smooth and subtle as his is loud and rasping, it's perfect for communicating her stories. 'Day One' is perhaps the most devastating of these, detailing a woman desperately trying to convince her unborn child, and by extension herself, that she won't turn to drink and drugs while her man is away at sea. There are elements of Jane Weaver, Hope Sandoval and even Lanegan himself in the way she creates an inescapable atmosphere armed with only the barest of accompaniment. Luckily it's an atmosphere you won't want to escape. The closing track, 'Your Blood', is a perfect finish, its delicate refrains on cello and what sounds like a celeste conjuring the image of seeing yourself, in a painting, slowly fading away, like a twisted Roald Dahl story. “I'm tired of the singer/songwriter thing, it's not enough for me,” she says. It's not enough for us either. That's why artists like Christine Owman are so important. Screw theatre, we need to keep her making records.
Read More