On their debut album Bird, London four-piece Ex People want to scoop the listener up in their avian-metal talons and take them on a journey to the gloriously jagged peaks of glacial riff-mountains.

If you’re willing to be snatched up by these sludgy beaked sods Bird will proceed to nosh you down, stuffing your limbs deep into its fuzzy craw, before lovingly regurgitating what remains of you to their chirping chicklets.

Before we continue I just want to say that from this point on I promise I’ll keep the bird puns and crap metaphors to an absolute minimum. I was going to attempt do the entire review referring to each song as a different type of bird, but I realised I know absolutely fuck all about birds and that would actually be really shit.

Anyway the only thing I know about birds is that crows secretly have human-like arms hidden underneath their wings. Muscular arms that they use to steal babies’ dummies, hot-wire Skoda brand cars and empty out packets of crisps onto the floor beside wet bins.

So unlike the actual feathered creatures, the album Bird is much more up my street. It’s packed full of crunchy metal riffs and scuzzy doom, all lovingly mixed together with a dramatic grandness that elevates each track to delicious heights.

With their debut Ex People have made a very impressive record, mixing the pleasant with the nasty like a Polo wrapped in coriander. Just listen to the rumbling opening bassline of ‘Without’ as it wiggles out a slippery oily slink that is as beguiling as it is sinister.

Tracks like ‘Not A Drill’ and ‘Complainer’ start with a powerful chugging riff before exploding into a catchy melodic chorus in a dynamic that perfectly sums up the accessible sludge heaviness that Ex People excel at. Elsewhere on the album they alternate between crushing doom (‘Dread’) and slow-burning stoner riffs (‘The Host’) with ease.

It’s a bloody good listen and one well worth undertaking.

So go on, allow Bird to grab you in its powerful grip.

Steak take back the throne on No God To Save 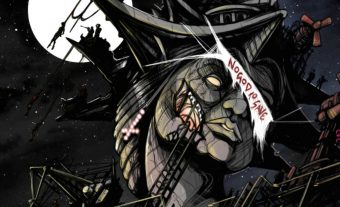