My knowledge of the occult is fairly scant. In fact it pretty much extends to a few titbits related to me by a drunken Welshman called Clive, with whom I used to work at a second-hand bookshop. A magick enthusiast whose skin was impregnated with various esoteric symbols, Clive’s mystical phenomena included an ability to ritually summon the upstairs neighbours by alternating albums by Crass and The Clash at top volume on our battered shop stereo.

In fact it’s hard to recall much of those conversations over the volume of that and other memories, but enough rudimentary knowledge was wedged into my brain to know about banishing rituals, which are used by practitioners to clear the air of impurities and negative influences. Which brings us not so neatly to Banishing Ritual, the debut album by Feature.

Banishing Ritual is unusual for a debut album, in that the band, consisting of Liv Willars, Jen Calleja and Heather Perkins, actually broke up at the end of last year. With each member continuing to perform in other projects, the title suggests the album’s release is a way to reconcile the band’s dissolution, a (chalk) line drawn underneath several years spent at the heart of London’s DIY scene. That or they’re all satanists.

Either way, Feature have left us with a thrilling thirty-minute document that’s as sharp as a gleaming spike. Thrashily catchy in the tradition of bands like Buzzcocks, Banishing Ritual immediately gets your blood fizzing with ‘Psalms’, a sardonic ode to slacking that is, ironically, bursting with energy. The pace is maintained by the blunt, Prats-esque lo-fi of ‘Jealous’ and the breathless ‘Reeling’, which shifts from panicky post-punk to elevating melodiousness, like the first two Idlewild albums condensed into a single song.

The faultless first side continues with the foggy-headed ‘Fresh Pillow’. Snare hits spill out as if from an accidentally overturned jar of prescription pills, while the guitar’s bleary sludge feels like its already half-tranquillised. ‘Fresh Pillow’ also features the best chorus lyric of the year so far – ‘Making friends is hard / When you’ve fallen in the bath’- which may look daft written down but is oddly affecting when set against such a moody backdrop.

‘Gatekeeper’ could be the best of the bunch, a passionate tribute to women whose creative spark has been extinguished by doubting Thomases. The band make their point in the best way possible, apparently reciting (in German) the transcript of an infamous interview with Georg Baselitz, in which he made the unfathomably ignorant statement “Women just can’t paint very well”. Why dignify someone with new words when you can force them to choke on their own?

Side A may end with a serious, wordy collage, but Side B begins with the irrepressibly perky ‘Prefeel’, which turns eight words and three chords into a potent indie cocktail. This is then distilled into even fewer words and chords with the teeth-grinding drone of ‘Memory’, a serrated verse gifted an angelic chorus. Bassy backing vocals from Joey Fourr provide some ballast.

The line ‘You’re fifteen years old / You’re forty years late’ will chime with many millenials who feel like they were born in the wrong era. The song it comes from, ‘Schedules’, is at least twenty years late itself – this probably would’ve got decent radio airplay in the mid-nineties. The same goes for ‘Twins’, the tunefulness of which can’t be uncoupled from the creeping separation anxiety of the lyrics, which are apparently about a stillborn sibling. John Peel would’ve loved it.

Banishing Ritual is concluded with the wordless eulogy of ‘Feature Theme’. While you’d expect Feature’s theme to be as spirited and breakneck as the rest of their songs, it’s actually the slowest and most downbeat of the lot. In the context of the album’s release, it’s tempting to think of it as a funeral dirge.

The atmosphere duly purified, all that remains is a nagging disappointment that we may not ever hear a follow-up. Much like many of the DIY venues that spawned them, Feature themselves have been banished by a city that, blinded by wealth, seems not to recognise the value of an independent music scene. Feature were the heroes we could’ve had. We probably didn’t deserve them. 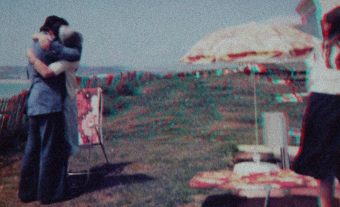 Celebrate Rounds' resplendent 'We've Met Before' album by snagging it on both cassette and VHS - replete with stylish 3D glasses...
Read More