Most artists embark on lengthy promotional tour-cycles not just because the desire for live performance forms the backbone of their DNA. They endure them because the seemingly endless sprawl of digital vampirism continues to suck their financial lifeblood dry, thereby making extensive tours a monetary necessity.

It is a universally acknowledged fact that repetition leads to boredom, so that even the most innovative and forward thinking of venue tourists must at times struggle to reinvent the setlist wheel and rejig songs without falling too foul of ‘populism’.

In fact, most artists will tell you that from the moment they finish playing the first sketch of a song, it has already lost its inherent spark, a part of its soul has already died. So, finding an inspired way of cutting out the pattern whilst reinterpreting the layout, must provide for more than its fair share of artistic challenges and in-team brainstorming.

As an acknowledgement of those who constantly strive to push through creative barriers without fear of audience repercussion, Domino Records has instigated a series of ‘warts and all’ live studio recordings entitled Documents. The aim is to showcase raw live performances more or less as they are captured, with as few touch ups from the console as possible.

American artist Julia Holter was first to step up to the plate, and the output from her ‘organic session’ is In The Same Room, a whistlestop live-take through a tracklist of songs largely from her albums Loud City Song (2013) and Have You In My Wilderness (2015). Holter’s in-session band comprises her touring outfit of Corey Fogel (drums), Dina Maccabee (viola) and Devin Hoff (bass), musicians with whom she has formed an intuitive bond and idiosyncratic musical groove.

Theirs is a relationship in its prime, which anyone who has seen this quartet play live will attest to. So it is not surprising to find their interaction with the material a contradiction in terms as they marry orthodox with unorthodox, in an attempt to stay true to the original outline whilst subverting the body with more colourful and radical reinterpretations.

In the same way that the album allows the band to excavate old arrangements, In The Same Room also gives Holter the opportunity to deep dive her material for new meaning and, ultimately, to give it new expression.
Although subtle and very spacious, this album has been infused with a gorgeous energy and inviting dynamism that is distinct from Julia Holter’s studio albums, thereby making In the Same Room as vital an addition to Holter’s discography as any of her other recordings.

The live interpretations of the ‘old’ songs featured on In The Same Room are in their own right as engaging and captivating as the original studio recordings. In fact, it is not inconceivable that even some of the most hardcore of Holter fans may just prefer these slightly blemished, organic renditions with their unedited sounds and almost tangible soul. If anything, these slightly imperfect performances showcase her unerring ability to inhabit a song.

‘Horns Surrounding Me’, a riot of viola and cymbals, crafts a heart of darkness, at the centre of which is calm rather than the nail-biting anxiety evoked by its predecessor. ‘Lucette Stranded On The Island’, a glory to behold live, is a song about abandonment and being left to die.

Rife with helplessness, it blindly meanders into a bedlamatic mid-section but is masterfully pulled back from the brink, before completely spiralling out of control. A perfect showcase of the fertility of Julia Holter’s boundless imagination, this is perhaps one of the most perfectly choreographed tracks on the album. Pushed to the fore, Holter’s vocal is clear and exposed. With nothing behind which to hide, it personifies the final disenchantment of the hopeless romantic.

The rendition of ‘Silhouette’ is a study in understatement and of all the tracks on the album the one which comes closest to the quartet’s actual live on-stage performance. It’s certainly her most compelling vocal, particularly when the track moves into its frenzied outro, replete with damning piano sequences and Holter throwing caution to the wind, filling the billowing instrumental with a chaos of melismas.

In fact, as a result of its unadulterated exposition, Julia Holter’s voice shows another side to its personality. She is so close to the mic, one can her voice tremoring, every breath and move, recalling the perfectly imperfect delivery of Mark Hollis on Laughing Stock. Her performance, bordering on freeform, is uninhibited and at times wild, her tone intimate and conversational. It is pure theatre which in many ways is a contradiction of the intensely private and reserved personality we know Holter to be.

Her voice sweeps up and down octaves, her timbre switching from gravelly to airy as exhibited in ‘How Long’. On ‘Betsy On The Roof’, a track that juxtaposes a plaintive instrumental and wistful harmonies, her stark and sometimes hoarse vocal evokes a gripping, tragic intensity. The result is truly mesmerising.

The resultant whole of its component parts – the dramatic vocal characterisations, the poignant lyrics and the dynamic instrumental interplay – is a richly theatrical and completely compelling album. In essence, this feels less like an album of reworked songs, and more like a revisualisation of an ever shifting storyscape. Yes, one or two of the tracks appear to be wearing the same clothes so to be speak, but in the main this is Julia Holter & co covering upturned ground with innovative spark and renewed vigour.

While In The Same Room stays true to Holter’s idiosyncracies, all the key fundamentals are there. It showcases her astonishing ability to re-imagine, her insatiable desire for innovation and her incredible talent as a live performer. 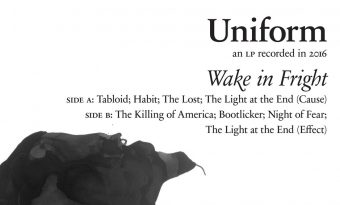 With Wake In Fright Uniform have made a thrilling and genre pushing sophomore album that paints a dark but complex picture of a world in ruin.
Read More