In the first minute of album opener ‘The Call’ on Xiu Xiu’s latest release Forget, you could be forgiven for anticipating a record with a sense of humour, one that would wear its nihilism on its sleeve but never actually scythe you over the head. This just so happens in minute 1.24, when the melodically spoken ‘kill yourself’ forces an abrupt rearrangement of my sweetly nurtured worldview.

Over the years Xiu Xiu admirers will probably have come to recognise and appreciate this device employed by the band – lyrics from the darker edges of life wrapped up in driving, emotionally charged sound. That does however, not make it any less effective when applied to the about-to-be-converted like myself.

If you were still open-minded about the direction Forget might take, the grandiose concert that is ‘Queen of the Losers’ carves out the band’s psyche as one where the floodlights shine from an oncoming train.

From an inability to escape psychic pain regardless of external circumstance (‘Everyone hates you / the pain has just begun / And everyone loves you / the pain has just begun’) to the downright self-eroding (‘What’s your name / Fucking nothing, repeated three times’), the song throws a self-assured, connecting rope to Xiu Xiu’s previous work on Dear God, I Hate Myself. On ‘Queen of the Losers’ the lyrics of corrosive self-hatred cast a deathly veil over the more melodic runs that never quite propel the mind to pleasant wholesomeness. Maybe there is hope.

In ‘Wondering’, what wasn’t possible before suddenly becomes feasible. A sense of healthy detachment takes hold of the imagination, as the stable optimistic bass prods me on towards a sunnier disposition. And then, most surprisingly of all, even the sun gets a mention in the lyrics. With its nods to danceable Cold Cave and, incidentally, MGMT’s ‘Time to Pretend’, ‘Wondering’, despite its open invitation to questioning, may not be the moment intended for philosophical exploration.

When ‘Get Up’ erupts into a powerful instrumental ode to being alive, after proclaiming ‘you are the only reason I was born’, a delicious shiver wiggles its way down my spine and I know I have just perceived brilliance.

Still pondering the title choice of ‘Hay Choco Bananas’, I find myself pulled subtly downwards into a clear, ever expanding trajectory as layers of synth and bass are piled on top of each other, building up to what is perhaps the most satisfying and resolved song of the album. Comparable in structure it promptly reminds me of Portishead’s ‘The Rip’.

With the murky business of prostitution at its core, ‘Jenny GoGo’ feels like a ride along a threatening wilderness, so taken in by its caustic beauty that you miss the signs of imminent death. Ominous synths, a forlorn organ progression, followed by beautiful vocals which are characteristically on edge, and all of this accompanied by a repeated message to escape, to ‘GoGo’ away as the vocals grow from steady, muted menace to psychotic pleadings. So far my favourite song on the album.

The beginning of ‘At Last, at Last’ promises respite from the intensive emotional turmoil of the previous track. First impressions soon prove false as the ensuing vocal cracks like a half-cry of exhaustion. The song rapidly breaks into explosions, ends in chaos and the earlier optimistic glimpses of ‘Wondering’ have become a faint memory.

The eponymous ‘Forget’ leaves a muddled impression. It starts with a refreshing wave of disco only to quickly transmogrify into the familiar bleakness I’ve come to embrace, all the while becoming (by now predictably) unhinged. Sadly, the song does not add anything fundamentally new – the heavy marching drum beats unfortunately not as tasty as previous tracks and not begging for a replay.

‘Petite’ is a softer-spoken, poetically articulate, crushing extract of a lyricist’s inherently negative view of his world and its inhabitants. Despite its cuteness and soft guitars, listening to ‘Petite’ is nothing like lying on a cushy psychologist’s couch. Imagine instead being made to listen to a manifesto about your world. ‘A world of troubles coming down in snow’ where ‘you feel senseless and you should, you feel pointless for you are’.

The last track ‘Faith, Torn Apart’ is a fitting description of the emotion a Xiu Xiu novice could be left with by the record’s end.

Forget is nothing like an uplifting pop album, but it is also not as psychologically distressing as my earlier observations may have suggested. Lyrically, the moments of collected reflection take turns with a broken soul’s more deplorable meanderings – the kind that initially made me worry I would not be allowed to enjoy this record. The smudgy lyrics meant I could dip in and out of the darkness as I pleased but I did end up gravitating towards the darker tracks anyway. Why? Because Jamie Stewart’s enchanting vocals express so much highly-strung angst it makes me feel worry and safety for him at the same time. He is blessed with the artistry to make the night sing.

Compared to Xiu Xiu’s previous work, this record strikes me as the most accessible to date. Thematically it doesn’t go quite as far as catharsis – the curse and solutions to life’s ills on offer here are still non-being – but why not take up the record’s invitation to forget about it, just for a while, and listen to the music?

All Them Witches - Sleeping Through The War 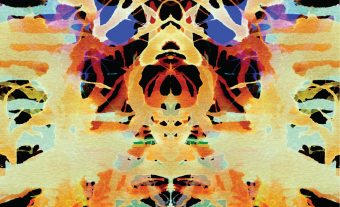 Nashville psych-rockers All Them Witches continue their star-bound trajectory on outstanding new album Sleeping Through The War...
Read More