Four years have passed since Nashville four-piece All Them Witches cackled in the face of the sophomore curse. With its wealth of accessible hits and understated slow-burners, 2013’s Lighting At The Door firmly set dials for the sun. It is an upward trajectory the band sustained with ease two years later with mystical follow-up Dying Surfer Meets His Maker. Recorded in an isolated mountain cabin and infused with a lowland shamanistic quality, the record served as a giant step forward in terms of both craft and execution. So, the question is, with such a deftly hewn platform to build from, can All Them Witches make it three in a row?

The answer is an emphatic, riff-soaked, organ-scorched yes. A 46-minute affirmation of everything heavy psych rock should be.

In a nod to their Nashville roots, All Them Witches elect the famed country Grammy-wielding Dave Cobb to helm production. The country influence doesn’t stop there however. Along with Cobb, the band have also employed country singers Caitlin Rose and Erin Rae on backing vocals. One of the contributing factors to All Them Witches’ rapid rise is their cross-genre appeal. Straddling both bespectacled-indie and beard-rock circles, it will please many to hear that this is where the country insurgency ends.

The album’s kindling flickers to life on opener ‘Bulls’. Coastal bird sounds augment lazy swathes of surf guitar and Rose/Rae’s dreamy ‘do-do-do’ vocal. Before any fears of an ill-advised Bee Gees tangent take hold, Ben McLeod kicks the fuzz and the psych-rock flag-bearers we know and love make their bombastic entrance. After returning to its deck chair for another relaxed interlude and just as I reach for the Pina-Colada, All Them Witches sweep in on a superbly executed and typically well-judged psych-rock jam-out. Just as on Dying Surfer…, the excursion never gets boring and the song fades out on a sunset of howling feedback, earning track one a big fuck-off tick.

Track two ‘Don’t Bring Me Coffee’ turns up the cool with Parks Jnr evoking a whisky-soaked Wild West: ‘Ain’t nobody gonna tell me how to run my town’. As the palm-muted guitar intro cracks into a huge dissonant fuzz-barrage, the script worthy words strike again, ‘Every night another woman crawls out my chest / She tells me it’s alright.’ Like a lot of the lines in this genre, I don’t know what it means but I’m pretty sure it’s cool.

Up next is lead single ‘Bruce Lee’. As the song charges into an overdriven wail we stare down the barrel of All Them Witches’ deadliest weapon: the instrumental Tetris played between McLeod’s distorted guitars, Van Cleave’s keys and Staebler’s drums. The three musicians carve out audacious layers of rock that always make room for the others to shine yet never detract from Parks Jnr’s message.

‘3-5-7’ provides the album’s first prog-rock adventure. The hammer-on wave of McLeod and Parks’ guitar/bass flutter filters through Staebler’s hat-snare heave with trademark poise. The song’s typically elliptical lyrics sharpen for the chorus and bear testament to the band’s recent critical-acclaim. ‘I am focused, I am almost here / I am focused, I am here.’ As the song’s half-time apex soars and vocal layers puncture the fuzz, the stage is set for the record’s second half.

Sleeping Through The War really does feel like a continuation of where Dying Surfer… left off. Just as ‘This Is Where It Falls Apart’ provided a transitory psych-stool to rest on before setting off again on the record’s second act, ‘Am I Going Up’ replicates this method. Vocal harmonies sit atop a pulsing rhythm section and meditative chord progression. Flickering guitar delays ride a keyboard fuzz-drone proving that the Nashville quartet’s ability to conjure ethereal vibes remains intact.

Third single ‘Alabaster’ follows and promptly delivers the album’s only misfire. Whereas the instrumentation that underpins ‘Funeral For a Broken Bird’ soaks up most of the song’s running time before Parks Jnr initiates his spoken-word chant, ‘Alabaster’ lays no such groundwork. Accompanied this time by Rose & Rae, the vocal just doesn’t quite sit right with the dissonant guitar work. A timely flutter of bongos brings welcome spice to the song but the bland foundation never quite sets sail and, if I’m honest, I’m mystified why it was chosen as a single.

Album closer ‘Internet’ again doffs its cap to the band’s home state of Tennessee, with nine minutes of dry-witted sumptuous blues: ‘If you’re asking me, I got one thing to say / If I can’t live here, I guess I’ll go live on the internet.’ As McLeod’s guitar take centre stage you are again reminded of what makes All Them Witches such an exciting force: the standard of musicianship present across all four members is genuinely exciting. Organ, guitar, drums and bass ebb and flow through the song’s texture, all forging unique paths without ever sounding disconnected or vying for the limelight. As the song and album ache to a restrained close, particular credit must go to Dave Cobb for applying just a touch of country sheen to the record’s execution without ever buffing out the raw edge that affords the band its wide appeal.

Sleeping Through The War closes out a trilogy of outstanding albums and while it may not reach the mountainous peaks of Dying Surfer Meets His Maker, it does comfortably sit alongside it. If an album can serve as a signpost to future audio endeavours, then across its 46 minutes and miscellany of melody, All Them Witches have carved a simple destination. The Sun. 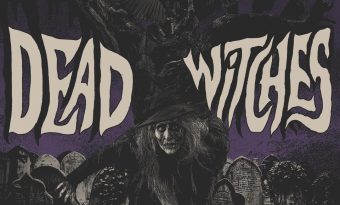 Despite their obvious pedigree, Dead Witches' debut only really comes to life when they deviate from the traditional doom formula...
Read More