No one can accuse Elk of a lack of imagination. The post-rock quintet from Vigevano, Italy, concocted a complex post-apocalyptic narrative for their recent album Ultrafun Sword, where an alien invasion provides the backdrop for a range of very human experiences.

We’re pleased to premiere a brand new chapter of Elk’s dramatic story today. B-side ’02’ takes its name from the first aeroplane to launch a doomed attack against the invaders. The theme is reflected in a bold, tense piece of music that starts off fuelled by heroism before descending into a mournful yet rousing resolution. Check it out here, then scroll down for an interview with Elk themselves…

The Monitors: B-sides have gone out of fashion a little bit in the digital age, what made you want to put this out as a b-side and what’s your favourite b-side of all time?

Elk: Yeah that’s right but in this case we didn’t record ’02’ thinking about that. Originally the song was inside the album’s tracklist. Then our producer changed his mind about it, to follow the flow for Ultrafun Sword properly. But we still love that song so here you have it. Best B-Side of all time? ‘I am The Walrus’.

Ultrafun Sword is a post-apocalyptic concept album about an alien invasion. We seem to be in a pre-apocalyptic situation at the moment. What record, apart from your own, would you choose to soundtrack the end of the world?

Yeah our world looks so weird now. Good question, I don’t know. To me it is easy thinking about ‘Were Is My Mind’ but that’s Fight Club‘s fault I guess. I would say every Mogwai crescendo has the right pathos.

Can you tell us a bit about the artwork for your music? Do you work closely with the artist?

We are very proud of our cover and yes, we worked together with the artist Dario Li Causi to realise it. It expresses perfectly the mood of the record and the idea of an invincible mother nature, greater and stronger than every ‘worst case’ scenario.

Did ’02’ originally have a place in the story of the album? Can you tell us a bit about the meaning of the song?

Yes I already mentioned that before. It’s not on the album just because of its weird structure and mood. We wanted to create a perfect soundtrack for a pilot ready to attack something greater than him, in the loneliness of his cockpit. So we concentrate a lot of human feelings in this track.

What’s next for Elk? Any plans to come over to the UK?

We’ve already been in UK to promote our first record World and it was seriously amazing. The crowd was so incredible and it’s still a nice memory to remember how everybody tried to sing our songs without knowing any words, just because it was a good moment together. We are planning to come back for sure. If someone who likes us would love to bring us there and has good connections, he (or she, even better) just has to write us. We still think that our kind of playing music is more suitable for European ears than Italian ones so, let’s see what is going to happen. 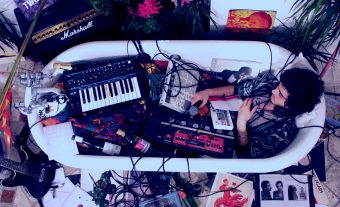 Dominic Wolf demonstrates how to walk the line on the towering 'Tightrope', the dramatic new single that we're streaming exclusively today...
Read More