Amish 82 isn’t exactly a band name that trips off the non-Nordic tongue, but after their mind-blowing performance to an ecstatic Trondheim horde that included many music fans from outside the Nordic pale, it’s more than possible that rumour, like wildfire, will spread rapidly about these Norwegian legends of electronica.

Headlining the second night of Trondheim Calling at the prestigious Rockheim venue, their set marked the group’s return to live performance after a ‘time-out’ that lasted nearly four years.

Dark, potent, thunderous underworld electronica partied with pure ‘80s ‘Back To The Future’ melodrama, which combined with what has to be one of the most commanding stage presences on the planet – #JørgenMeyer – resulted in a 40+ minute set that could be simply described as ‘hypnotic’.

The set was performed against a visual backdrop. A montage of clips from B&W film, animation and images of prints and artwork that gave both dimension to the instrumental pieces and definition to the lyrics.

Known for their dynamic, experimental electro-sounds, Amish 82 topped and tailed their set with techno that both undulated and pulsated in equal measure. Much to the delight of the crowd, the group were joined on stage by not one but two special guests.

First up was Norwegian jazz vocalist and Trondheim Voices legend, Siri Gjaere. Radiating confidence and elegance, her performance was as self-assured as her physical presence; with a voice like hers, she has every reason to feel equanimous.

While the crowd roared in appreciation of her two-song performance, it practically bellowed when BC frontman Andreas Elvenes strode onto the stage. His arrival sparked the most surreal of live performance experiences, musically teleporting an enraptured audience back in time to the darkest, most melodramatic hours of early ‘80s ‘synthasia’.

If one morphed the classical strength of Martin Fry with the commanding depth of Phil Oakey one wouldn’t produce a voice as ‘high octane’ as Evenes’. When combined with an instrumental road-trip through times dominated by fellow Norwegians A-ha and synth-pioneers Depeche Mode, this highly charged element of the set proved to be its most exciting and memorable.

When your blood is pumping in time with the music and you can feel a continuous power surge rushing through your core, you know that you, along with several hundred lucky others, are experiencing something special. When it’s still happening minutes after you’ve left, you can upgrade that to extraordinary. 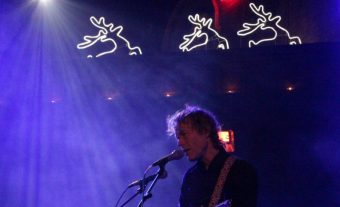 "That’ll be the happiest song you'll hear tonight." Low perform a selection of festive songs in their own inimitable style at Union Chapel...
Read More