This link of raw sausage drops from his gob into the grasping mouths of the watching audience members below, like some deranged sweaty mother bird feeding her ravenous and translucent-skinned chicks at some disturbing midnight mass.

The rest of the band behind him turn their fierce monolith grooves over and over like a dirty kebab. Burning away the greasy layers of flesh that once sat firmly on the audience’s faces, slowly but surely making damn sure they don’t leave the venue with an eyebrow or facial feature left between them.

If you haven’t had the honour of seeing Pigs Pigs Pigs Pigs Pigs Pigs Pigs perform live (yep I’m going to type that out each time) then you need to rectify that shameful remiss quick smart. Then, when you buy Feed The Rats you too will have that image burnt forever onto your retinas, deeply engraved as though it were poked into your peepers with a red-hot branding iron by a shamanic swine.

As well as the aforementioned Matt Baty, Pigs Pigs Pigs Pigs Pigs Pigs Pigs are Sam Grant (Guitar), Adam Ian Sykes (Guitar), John-Michael Hedley (Bass) and Ewan Mackenzie (Drums) and they make a right riotous bloody racket. Feed The Rats comprises three tracks that last a hearty 37 minutes. More than enough time for you to wallow in what is a delightfully murky journey into some of the most crazed and fun sounding brain-melts you can get.

Opener ‘Psychopomp’ (which was formerly available as a limited run of tapes) starts the record with a wail and a crash and never lets up, as the band twist and squelch their powerful riffs into demonic rhythmic incantations. ‘I am the demon!’ Baty throats up as though purging his body of some toxic stool. The track sasses by like a heavy footed elephant made exclusively of precooked bacon. If that image isn’t tasty enough for you then I don’t know what is, maybe a pork chop sandwich or handbag full of chips.

‘Sweet Relief’ is a, relatively speaking, brief blast of fist pumping catchiness. A stomping romper that’s sandwiched between the two longer and denser tracks that surround it like mud below the Earth’s core. It’s like sharing a lovely Fab lolly with the devil in a very packed and hot disco.

The 17 minute long ‘Icon’ is a wonderfully nebulous porcine glot. A track that winds up then down, then up again like a fucked helter skelter. It’s more fun than watching Pasolini’s ‘Pigsty’ when drunk, I can tell you.

As usual Rocket Recordings have done a beautiful job on the packaging and the die-cut artwork for the vinyl edition of Feed The Rats looks absolutely sensational, it is genuinely a wonderful piece of artwork. Lovely stuff.

So what I’m saying is this: Feed The Rats is 37 minutes of pure distilled fun. Yes, I said it again: fun. Good old fashioned fun, like gunning several cans of Special Brew and riding a shopping trolley around Tesco’s carpark until your are sick.

Feed The Rats parties hard like a booze-crazed ham homunculus on a particularly rowdy stag do. 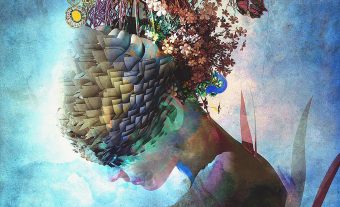