For a very long time, I’ve had a certain mindset about going to watch a band that I know nothing about, and have heard nothing from. That mindset is that I won’t enjoy it. It’s illogical, irrational and perpetually annoying, as it often results in me trying to comfort myself well in advance of any show, so that I don’t end up standing at the back of the room, tears streaming down my face as I quiver and seethe, hatred running through my veins. OK, maybe it’s never that bad, but you get the idea.

So it is while battling that mindset once again that I find myself in the lofty Village Underground, ready for the (fantastically titled) Holy Fuck to take to the stage. Holy Fuck are a Canadian band with a strong lean towards the funkier side of electro music, known for playing live instruments and creating their loops and samples live on stage too, much in the vein of Hot Chip albeit without “vocals” (there is a form of singing from frontman Brian Borcherdt, however his voice is immediately chopped up through various vocoders, making it almost impossible to discern what it is he’s actually singing). I’m curious, despite my brain telling me I’m going to be bored stiff.

A DJ opens for the band, at least I think so. He may be creating the noises and sounds we hear bleeping from the speakers live; I’m fairly sure I can make out a Kaoss Pad or two, however this could just be his deck setup. A constant visual film of speed boats in Miami is projected onto the wall next to him, bleached in a sepia tone for ‘nostalgia’. To be completely honest he doesn’t do much for me, and for the most part he’s playing to a mainly empty room. I’ve taken my place near the front, but there is still plenty of room. 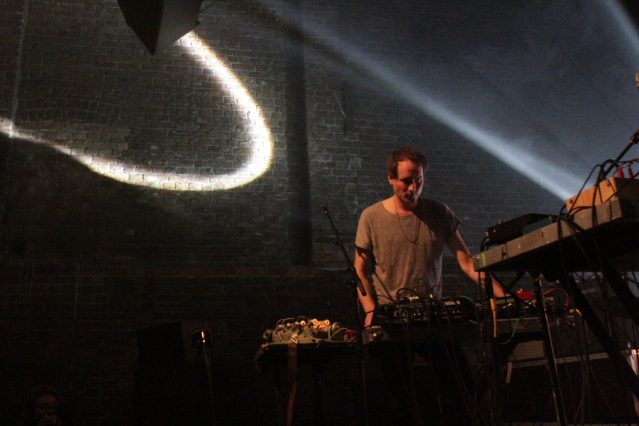 According to the internet, Holy Fuck have been very quiet for the last few years (six, I believe) so as the room fills the excitement of the crowd is palpable. It’s not quite enough to get me in the right frame of mind, but it’s a damn good start. After a few cans of stupidly overpriced beer (£4.50 for a coke can size Estrella? £10 minimum card charge?? Are you shitting me guys??? Apparently not) I am a bit looser, listening to the chatter all around me. There are a group of four (two boys, two girls) in front who are having a very loud amount of classic lad banter. Next to me are a much older couple, they seem to have come straight from early ’90s Brixton and are definitely part of the happy face original rave generation. They’re holding about 6 cans of beer each and joyously talking to just about anyone who’ll listen, and it warms me to see how happy and clearly in love they are (although I have my suspicions, and begin to wonder just what they are washing down with all that beer). I like them already. There is quite a broad spectrum of ages here, with the older crowd seemingly dominating. In fact, on closer inspection I’m fairly sure I am the youngest person here. I also appear to be the only person here who doesn’t know the band, and feel a little tinge of wistfulness at the expectancy plastered across everyone else’s faces.

The lights dim, and the band takes to the stage. Drummer Matt Schulz and bassist Matt McQuaid take the back of the stage, while keyboardists (or samplers? Loopers? Vocalists? All of the above?) Borcherdt and Graham Walsh take front and centre, their pads and decks and wires facing each other (there are honestly so many wires I don’t know how they remember which ones plug into what). The drums kick in and my god I forgot how loud it can get at Village Underground. The band launch into their first song, ‘Chimes Broken’ from their latest album Congrats, which sounds like a weird, acid trip rave remix of ‘Born Slippy’ by Underworld, Borcherdt’s distorted vocals filtering through the speakers. It’s great. I find myself getting a little tingle down my spine, and start to think that maybe I will enjoy this. Although every band opens with a strong song, so it’s probably just a fluke right? Right? Wrong. 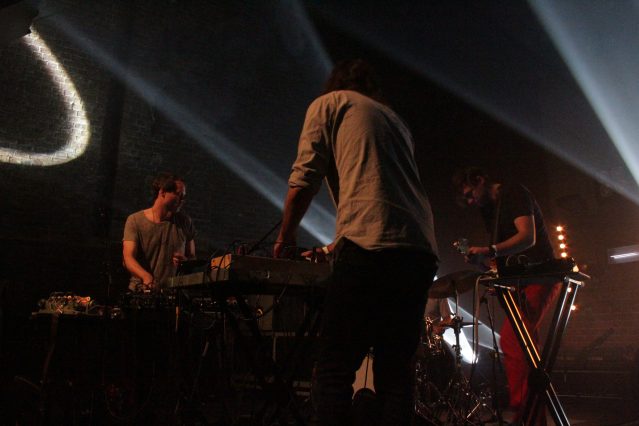 Holy Fuck are immensely enjoyable. By the third song, ‘Latin America’ (which sounds a little bit like if Steely Dan reinvented themselves as a Canadian electronic band), I can feel a strange itch in my leg. I scratch but it doesn’t go, in fact I feel it spreading up my leg and into my body, which starts to move of its own accord. It’s only halfway through the song that I realise I’m not having a stroke, and that I’m actually dancing. DANCING! Oh the joyful wonder of it all. Admittedly it’s pretty cramped by now, so it’s the very definition of dad-dancing, but the bop has taken hold.

The band launch into ‘House of Glass’, with its pulsing squiggly synth line opening, and I feel my arm lift into the air as I ACTUALLY START POINTING AT THE BAND IN RHYTHM TO THE MUSIC. My god what a feeling. I’m not the only one either. Remember the older couple standing in front of me? Mr. Happy has disappeared, whether further into the crowd or to find a spare toilet cubicle I’m not sure, but despite this, despite being left alone, Mrs. Happy is what I can only describe as full on fucking going for it. A little space has cleared for her as her feet stamp on either side, one arm in the air while her hand mimics the music being heard. I can only assume by this point in her come-up that she’s actually, physically seeing the music, and is trying to connect with it through the art of dance. She is quite literally throwing all the shapes (the wiggly snake and the hysterical shopper seem to be her favourites). It’s great. I’m having fun just by standing near her, basking in her unadulterated admiration for the band.

Next song ‘Xed Eyes’ features more of those “vocals”, with Borcherdt putting the whole microphone in his mouth and breathing the words into it. It’s working for them though. Borcherdt and Walsh make great frontmen; despite facing away from the crowd, they’re moving and jumping and dancing and (in Walsh’s case) kneeing harder than anyone in the audience. It’s great to see a band enjoying themselves as much as their audience, and this is very much the case for Holy Fuck. 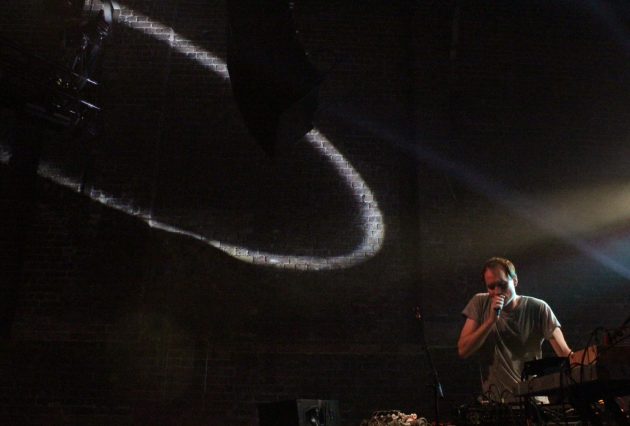 Holy Fuck play a lengthy set (post-gig googling reveals it’s mostly stuff from the latest album, although no complaint here), ‘Red Lights’ showing off McQuaid’s funky bass licks while ‘Caught Up’ utilises Schulz’s drumming, a fierce tapping melody interspersed with cymbal crashes. To be fair to both of them they are completely on point throughout the entire show, it’s just from where I’m standing I can’t really see them.

The band launch into one of their most famous songs (I mean, I’d heard it before without realising it was them) ‘Lovely Allen’ and the dancefloor explodes in a shower of energy; I even see a small, somewhat misplaced moshpit open up. Mr. and Mrs. Happy have launched headfirst towards the front, everyone is jumping and hugging each other (apart from one slightly older man standing near the front who has been chewing the same piece of gum for what I can only imagine is about 6 years and has refused to move the entire time, his desperate attempt to delay the inevitable gurn his only motion). It’s a wonderful event. The song itself could easily sound like a Sigur Ros number if the band moved into poppier, more electro-tinged sounds, and we happily let it wash over us. At one point a woman in front of me starts Shazaming the song and at first I’m glad I’m not the only non-uber-fan here but then I stop caring, lost in the energy and glory of the music.

Holy Fuck leave the stage for a moment before returning to play an encore of ‘Shivering’ and ‘SHT MTN’, which was a bit of a drag after the amazing ‘Lovely Allen’, which is definitely a show-finisher. Still, by this point they can do no wrong by me, after playing an incredibly tight set that I will remember for a very long while. When I get home I make a playlist of their songs and take a deeper listen, however the recorded versions can’t quite capture the magic of that live performance. If you get the chance to see them I would do so, it’s a somewhat life-changing event. Holy Fuck, that was great. 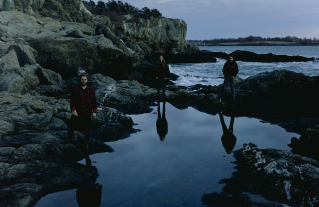 A belting set from barnstorming Boston trio Elder shows they're quite literally a band to tell your grandchildren about...
Read More