Instead, I told myself it was okay that I wasn’t writing because my apartment doesn’t have internet so I couldn’t possibly get work done. However, after too many long, hot nights without Netflix I finally decided it was time to go to a coffee shop.

Being the broke college student that I am I chose Starbucks instead of a local coffee shop because I didn’t feel bad using their Internet without buying something. Karmic retribution obviously didn’t see things the same way as me. My laptop had 16% battery, the one open outlet didn’t work and when I got up to look for another outlet I tripped and cut my leg open. Needless to say I promptly left the establishment without typing a single word.

Eventually, we convinced my roommate’s sister to knock on our neighbour’s door and beg them to let us connect to their internet. Finally a real person in society again, I was able to write this column.

The news I would like to focus on is the upcoming Together Fest. On October 8th, the first all-female EDM festival lineup will take the stage. As a female who works in the music industry I would like to be able to say that this is the start of a trend, but that could also just be wishful thinking.

Now I won’t turn this into a long-winded speech on equality, but I would like to highlight a few jarring statistics. Men produce ninety-one percent of popular EDM. Moreover, only about 5-10% of a typical festival lineup are women. This makes sense. You can’t have half of a festival lineup be women when women produce only 9% of popular EDM. No matter how you do that math it just doesn’t work.

I think Together Fest is an incredible idea and an incredible way for women DJs to show the world their talent, but I think to actually change those statistics the answer doesn’t reside in all-female festival lineups. It is however a landmark step that the first one is set to take place. Whether you believe that step is in the right or wrong direction I will leave up to you to decide for yourself.

This time around the artist I would like to highlight is the ever-elusive James. You know when you’re lurking your ex real hard on Instagram and you end up on their brother’s girlfriend’s sister’s cousin’s account? Well that’s kind of how I ended up finding James except the platform was SoundCloud, and I was jumping from artist to artist trying to find tracks for this column. His tracks caught me with the way that they simultaneously captured an upbeat yet dreamy sound.

With not even 2,000 SoundCloud followers this artist is flying under the radar in every sense of the phrase, but some part of me thinks that he or she likes it that way. On two separate occasions James has tweeted “Not dead” and “I’m not dead I promise I promise I promise zippy.” While I don’t have any album or tour information for you, I promise this music is worth the listen so I’ve included links to James’ Twitter and SoundCloud. Hopefully you’ll have better luck than me at unearthing more than just a few tweets that proclaim James’ livelihood.

This track is the Ekali Remix of Ta-ku and Wafia’s ‘Meet in the Middle’.

‘Peach’ is a track by Los Angeles artist James.

‘Take Flight’ is a track that was produced by Autumn in June and Flip & Gawd.

This track is the Kasbo remix of Mutemath’s ‘Monument’.

‘Wit It’ is a track by The Flavr Blue which was produced by Sweater Beats. 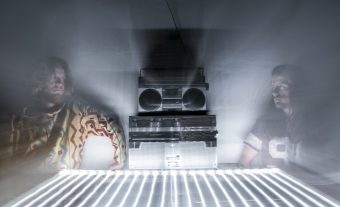 The drumming side of Soccer96 tells us about growing up in Tottenham, being broke in Shoreditch and getting offered drugs while jogging in Forest Gate...
Read More