When you come across the words ‘football’ and ‘song’ in the same sentence, what tends to come to mind? Chances are that nothing you’ll think of will tally much with ‘Bing Bong’, Super Furry Animals’ song for Wales at Euro 2016.

An elastic, technicolour snapshot of some future pop landscape where techno and disco have merged to offer a playful new breeding ground for Beach Boys style harmonies, ‘Bing Bong’ is SFA’s first new release in seven years and coincides fortuitously with a string of live dates and festival appearances.

Can ‘Bing Bong’ inspire the Welsh national team to unlikely success in France this summer? We put forward our case to Huw ‘Bunf’ Bunford, lead guitarist of this magical five-piece, as to why he could soon find himself inextricably linked with sporting history…

Would you say you’ve released the most psychedelic football song ever, and was this the intention from the outset?

Possibly! I’m trying to think off the top of my head but I can’t think of many. Maybe the German one in 1978, because the quality of the film made it look psychedelic. The colours are all slightly radioactive in it. Musically, though, I’m scratching my head.

Yeah. Well, the Manics’ song is quite a traditional one, isn’t it? It’s got the commentary in it and everything. We were possibly trying to avoid doing a normal sort of football song – we kept some elements of football-ness, like a repetitive chorus that isn’t too difficult to remember, but I think that’s about it!

Lots of people love it, but I’m sure a lot of people are confused by it too. How much of either reaction have you encountered?

Oh, there’s definitely been as much confusion as there has been enthusiasm. It’s a confusing song. Lots of ‘serious’ music people have probably been scratching their heads wondering why we’ve done this!

That’s part of its appeal, for me.

Super Furry Animals has previous as a talisman for the Wales team – you played on the pitch before the win over Belgium in qualifying, and before the 2-0 win over Andorra.

We also did one years ago against Azerbaijan and we won that one 4-1. Whenever we’ve been performing on the pitch, it’s been a successful day for Wales. You’d think they’d ask us all the time!

Everyone will be banging the drum during the weeks leading up to the Euros – people will again start thinking that England can definitely win it, Germany and Spain will be the ones to beat, the usual suspects. But this year’s a bit weird. I’ve been collecting the Panini stickers – we’ve put our signatures on the front and we’re going to auction it for a Welsh charity – and when I looked through the teams, there’s not really a standout team. The Germany and Spain squads are getting really old, so this tournament could be wide open. Whoever turns up and isn’t knackered has got a chance, I reckon. 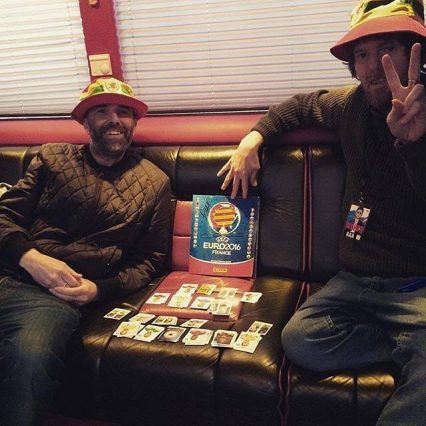 You only need look at Leicester City to see how far you can go with a tight-knit, hardworking side and a smattering of top class attacking talent.

Yeah, and energy – that’s what you need. Basically footballers are just idiots, aren’t they? They aren’t quite in touch with reality, but then nor would anyone be if they got the chance to earn tons of money for putting on a pair of shorts and playing football. You wouldn’t be knackered all the time – wouldn’t be like, “Oh no, I just played midweek”, you know? They need to harden the fuck up, because if you take an attitude like that into an international tournament then someone like Iceland will probably hammer everyone!

Austria look a decent outside bet too – they’ve got the likes of David Alaba, Christian Fuchs, Marko Arnautović…

There’s loads of teams who’ve got a chance, I reckon. Leicester have kind of shaken everything up. Hopefully ‘Bing Bong’ will be a big part of that and we’ll be able to have a smile on our face. We’re going out two days before the tournament starts to play a festival in Toulouse, so that’ll be funny. I don’t know if the French know what’s going to hit them, half of Britain turning up!

They’re going to hate it.

I don’t really fancy the Lens game [England v Wales] – there might be a bit of tension there. I doubt it’s going to go *really* badly, but I envisage water cannons and stuff like that (laughs). On the whole, I think it’s just gonna be carnage.

Guto recently named you as the best footballer in the band. Would you care to comment on this?

Ooh! Well, I’m very flattered – I wasn’t too bad at football, but I tried to do something on Soccer AM the other day, some bin challenge, and I lost my mojo. I couldn’t even kick the ball straight in that, so those days are long gone. I’m pretty nifty at bar football, what with my misspent youth and all that.

If Super Furry Animals were a five-a-side team, who would play where?

Our drummer Daf would have to go in goal because he’s got a dodgy back. We’d probably all have to play where our injuries would be least likely to flare up. Gruff would play up front because he’s tall, we could just hoof it up there or knock it off the wall to him. I’d just stay in the middle, shouting and telling everyone where to stand, blaming everyone else for not being in the right place at the right time. That old chestnut. We’d have quite a flexible formation. Interchangeable, fluid. Sexy football!

Are you going to stick around and record any more new material? You have a tenth studio album that needs making.

Yeah, it would be nice to get to double figures. We all probably know we have to do it but we haven’t put any pressure on ourselves to talk about it. We’re just happy to be on the crest of a bit of a wave of enjoying ourselves, you know? Don’t knock it, ’cause you can be really successful and not enjoy a single minute of it, so there’s something to be said for not putting pressure on yourselves. If it happens, it happens, but it would be strange if we didn’t attempt something like that. ‘Bing Bong’ wasn’t really planned – outside influences made us do it, really, and who knows, that might happen again. It was written twelve years ago but Wales kept failing to qualify on each occasion since, so it’s a journey, that song.

Do you plan to do any more Pale Blue Dots stuff, or indeed any other projects?

Pale Blue Dots was really a one-off. Now I’m just doing stuff on my own, kind of video soundscaping. If you go online and type in ‘Tokyo hotel silence’, that’s what I’m doing at the moment, which is basically working with this guy called Mark James, who did the video for ‘Bing Bong’. It’s kind of a visual-sonic-weirdo thing.

I probably will do that at some point but I’ve got a lot of things on at the moment, music and animation stuff. There’s a crazy thing I’ve been asked to do that’s quite interesting with Pete Fowler, and kind of installation at Liverpool Psych Fest. Last year they had a fantastic installation there which they’re trying to do again, and they’ve asked me to do the music and Pete Fowler to do the images. It’s basically an immersive experience. I don’t even really know! (Laughs)

Up in (the) Smoke: Semi Precious 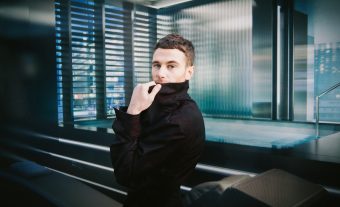 Our latest look at London through artists' eyes takes us down to Lewisham, home of Semi Precious and his 'Ultimate Lounge'...
Read More