Wasn’t the new Radiohead album dope? Did you get teleported back to your childhood while watching the ‘Burn the Witch’ video? What d’ya mean you weren’t born in 1967! Sighs… Unfortunately, Radiohead cannot be classified as Nordic by any stretch of the imagination, not even mine, and believe me, I stretched it, with as much elasticated gusto (as opposed to gusset) as I could possibly muster.

Alas, A Moon Shaped Pool is not for this column, unless of course we could say that the Moon was a WW Moon and therefore one could subsume the Nordic element of said Moon into this column? Possibly? No? Oh well, onwards and upwards then to our fair Nordic lands, where the ice has been a-thawing and the snow a-melting while the music has been a-making and a-playing.

As we’ve already taken up a wedge of time and space with our TGE/Nordic Gig Guide, we’re presenting a slimmed down version of our regular monthly column, which we’re kicking off today under the ‘Black Lights’ of the ‘lunar polar’ landscape that is Iceland.

Having taken their first tentative steps into singing/songwriting in English with their recent single, ‘Wanted 2 Say’, the Gervisykur remix of which we featured on here last month, trio Samaris have just dropped follow-up single, ‘Black Lights’. Set in the splendid isolation of a shadowy crystalline expanse, this forlorn invocation builds from spacious minimalism to a blend of beat-driven Urban/RnB into which are woven the most delightful uplifting electro flourishes. This is a sparkling composition that confirms Samaris’ status as one of the most finely evolved, relevant electro-experimental acts around.

‘Black Lights’ is out now via One Little Indian, and you can listen to it below. The album of the same name is due out on 10th June, but can be pre-ordered here.

Staying in Iceland, to where this band have just returned after rocking out at #TGE16, Fufanu have just released yet another potent remix of one of the tracks from their debut album, Few More Days To Go, released in 2015. Composer, producer and general legend Marius de Vries took Fufanu’s song ‘Plastic People’ and morphed it into a twisted, dark soundtrack for ‘60s TV Sci-Fi. Edgy, imposing, epic post-punk, it is as compelling as its aftertaste is disturbing. It’s the Heathcliff of remixes and one, like Bronte’s Byronic rogue, to which you’ll be magnetically drawn. Feast on Fufanu below.

Sailing over to Norway … well actually, in reality we’re still in the UK ‘cos right now that’s where you’ll find these guys! Highasakite are probably going to be THE act exploding from the Nordic atmosphere into the WW stratosphere this side of Christmas. With a record-breaking album already in the bag (their debut Silent Treatment is still sitting in the official Norwegian charts after two years and counting), Highaskite have proceeded to bombard the rest of the world with track after track of empowered feistiness. Molasses vocals, exciting percussion and a hugely energised instrumental cohort who manage everything from flugabone through an array of synths to guitars, the sum of the Highasakite parts is magnificent shimmering indie-pop. On the crest of a ‘tidal’ wave, they kicked off their World Tour last night with an explosive gig in Dublin, which they follow with stints in Manchester and London before hitting Europe and the festival circuit, wrapping up with a just-announced short tour of the USA in September. Their sophomore album, Camp Echo, is out now and it’s a mega-watt sparkler of diamond quality. Watch the newly published, spectacular, jewel-hued visual for their latest single, ‘Golden Ticket’, below.

Further north, in the Norwegian musical hub that is Trondheim, you’ll find yet another super duper new young band by the name of ‘As he said’, who have recently released their second single, an absolutely stunning soul-searcher called ‘Get Me Drunk’. A song about “not dealing” with unforeseen changes in circumstances, it presents two choices: get drunk to wash the problems away, or get away, leaving them behind.

Theirs is some of the best blended pop I’ve heard in a long, long time, and this is one magical track that veers towards blues/RnB whilst keeping its pop sensibilities. And it’s those pop sensibilities I now want to talk about. Have you ever heard of a ’90s Czech dreampop band called The Ecstasy of St. Theresa? No? Well YT search them, pull up the track ‘For That Moment’, give it a play and then listen to the intro of ‘Get me Drunk’ again! Uncanny isn’t it. As he said had never heard of #EOST until last week, so the similarity is 100% coincidental, but wonderfully so! A band to keep an eye on for sure, these are four very special, brilliantly imaginative and superbly talented musicians. Definitely on the ‘ones to watch’ list 2017.

Finally, over in København, synth-meister Caspar Hesselager has brought his electro-epicness to his own solo project, My Heart The Brave. (I have no idea why his heart is brave, but no doubt I’ll find out at some point!) Sporting a rather ‘off until you think about it’ cover photo (leave it with you), ‘Runner’ is the Palace Winter man’s latest single release and it’s packed with his signature full-throttle synth inventiveness. A fast-paced propulsive track full to the brim with a menagerie of synth and piano sounds, ‘Runner’ is a testament to Hesselager’s adept keys skills and his mastery of production techniques and technology.

An enormously impressive A-Z solo run here, from a guy with a lot more than one string to his bow. There’s more to come soon from the Dane, keep your eyes peeled!

Nordic Heads: Our Guide to The Great Escape 2016 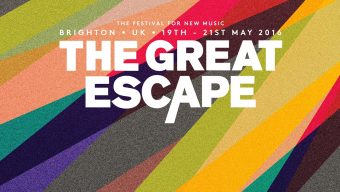 Our Nordic music column invades Brighton this week, with a guide to the best Nordic acts playing The Great Escape 2016 (with a few honorary surprises!)...
Read More