While April was the month of SPOT Festival, May is very much the month of THE GREAT ESCAPE #TGE16. Oh sunny Brighton, to be on your shingled beaches (said no-one wearing flip-flops).

Kicking off this Thursday, The Great Escape spans three days, copious venues and innumerable cross-continental acts hailing from every corner and genre of the musicverse.

The pedigree of the Nordic acts in this year’s line-up is mighty impressive and it’s super fab to see all five countries getting strong representation. Escapees will be able to see the likes of ARY (NOR), The Hearing (FIN) and Liss (DK) amongst others, but for your delectation and ease of navigation, here’s our guide to the acts you need to see at #TGE16 together with one glorious playlist (see below).

So, in no particular alphabetical order, we kick off with The Netherlands, which I have concluded should absolutely 100% for the purposes of this column be an honorary Nordic country! Why? Amber Arcades, that’s why…. Love Love Love their new track ‘Fading Lines’ which presses my recall button and brings sweet mems of The Cardigans flooding back. Breathy ‘on the other side of the door’ harmonies and lots of hypnotic guitar reps. What more could an indie girl ask for!

Currently on #cloudnine and yet to come down from the high of touring with Norwegian ‘man of the moment’ Kygo (see what I did there!), dreamy-voiced Anna of the North, will ship her multi-faceted electronica from Oslo to Brighton and my instincts tell me she won’t be long casting her bewitching spell on the hyped up hordes. Her latest single, ’80s style slow-setter ‘Baby’, is awash with Anna’s intoxicating vocal but stripped of the intricate instrumentation of her previous tracks like ‘The Dreamer’. Wistful, inviting electro-pop with catchy hooks and adorbs melodies you need to soak up.

Axel Flovent is from Iceland, home to some of the most insanely beautiful music being made right now by some of the most gifted and creative of musicians! He conjures up exquisite acoustic indie/folk awash with gentle waves of piano and lightly strummed guitar all muddled into a lush, reverbed blur. Like a fine wine, his music is heart-warming, elegant and just a little bit heady. Flovent writes honest lyrics which he brings to life with his warmly charismatic and intuitive vocal. He plays The Great Escape on the cusp of the release of his Forest Fires EP, some of which I’ve heard, and can’t recommend highly enough. It’s out on May 25th via Trellis Records (in the UK). Check it out.

I’m a firm believer that there’s nothing like a bit of Antipodean Scandinavian Soothing Metal (you heard it here first) and that’s just what you get with Cloves. Fresh from her stint at Coachella, the Aussie purveyor of bewitching melodies and sublime vocals is set to captivate the TGE throng with such delightful confections as ‘Everybody’s Son’ (I challenge you to remain unmoved!), lifted from her EP XIII, which was released last November. Cloves is Kaity Dunstan and she hails from Melbourne, hometown of Palace Winter’s Carl Coleman. Hey, you guys should hook up – a duet between you pair would be pretty #ripper! 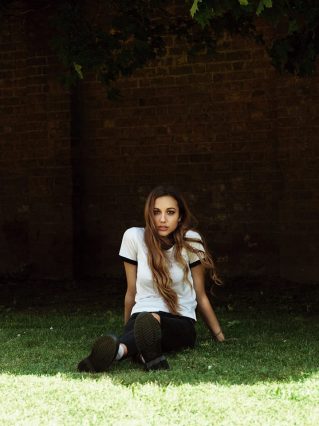 Don’t you tell me to ‘Shut Up’ – right back at ya Dolores, ok? The not shy – no, VERY FAR from shy – Swedish four-piece Dolores Haze is a girl band from Stockholm who produce ‘Goth, Sex, Diva Couture’. If you ever wondered what you’d get if you crossed Elastica with The Slits and Tony Basil, Dolores Haze are probably it. The band members’ names probably say it all really: Groovy Nickz (Vox, Bass), Groovy Fuck (Rhythm Guitar), Lucky Lollo (Lead Guitar) and Foxy Sagz (Drums). These outré avant-garders are bloody good – so good in fact that they played support to the ledge that is Iggy Pop earlier this month in London. So, WORD: if they’re good enough for the Igster! ‘Nuf said. 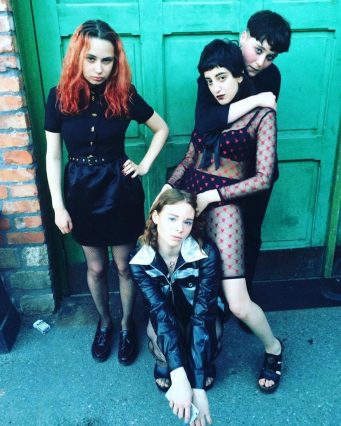 If you like extravagant experimental electronica you’ll get all the ‘e’s you need with Finnish trio K-X-P, whose name derives from Kaukolampi and Puranen, the two full-time members of the band, plus X for the mystery third that alternates between drummers Leppanen and Nykänen. Goth-rock electronica with an emphasis on challenging percussion and what sound like random variations on the electro theme but are actually strategically placed, deliberately eclectic, electronic sounds, usually with more twists than a rubber contortionist could pull off. Dark, intense and crazily disparate layers are woven together to create the most fraught and urgent of sounds. This set is one for electronic fans of varying degrees from Yamaha to Korg.

Yeah I know Switzerland isn’t Nordic but I’m taking extended artistic licence with this one purely because I think artists like Nadine Carina are worth your reciprocal time, effort and love. With a new EP ‘U R Far’ out on the Oh Sista Records collective, Nadine brings her ethereal electronica to Brighton for which that seashore of love should be truly grateful.

Form an orderly queue please! Whizzing into Brighton & Hove in their ‘Time Machine’ (see what I did there, again!) are ‘ma boyz’, Palace Winter. There isn’t anything left to be said, no word to be printed, that I have not already said or typed about these creators of blisteringly good psych. They played by:Larm, then SPOT, now it’s The Great Escape’s turn ahead of slots at Dot to Dot, Roskilde (wanna go!) and Green Man. With their music playing across UK airwaves on a station near you, their single ‘Soft Machine’, which coincidentally is my fave PW track, was recently playlisted by 6 Music. With their star firmly in the ascendancy, Palace Winter is not a band to be missed this weekend. Their debut album (#immense) is out 3rd June – pre-order it now via Tambourhionceros and get ahead of the posse.

More electronica, this time of a more ethereal, woozy nature. Swedish/Norwegian gathering Postiljonen are a three-piece who craft some of the finest electro-dream-pop imaginable (although they bring two extra instrumental volunteers on the road with them so expect to see a five-piece rocking up onstage). They have a new single out, ‘L.I.E.’, which unfortunately isn’t available on Soundcloud (but you’ll find it on my The Great Escape Spotify playlist if you’re interested). Recalling ’80s American film soundtracks, their music is multi-layered lusciousness. A many-hued, tantalising splendour, this is the ultimate sensorial pleasure.

Breathe in, exhale slowly, be mindful, listen to the songs of Danish soloist, Søren Juul. As refined and intricately woven as a spider’s web, this is the music of a master craftsman. Juul is about to open a European tour in advance of the release of his album, This Moment, which is due out on 17th June. His latest single, ‘Pushing Me Away’, is a musical heart-breaker that will render you powerless within the folds of its gentle arms. With an instrumental of such feather-light quality it never subordinates Juul’s fragile-as-glass vocal; this is the kind of song that the phrase ‘breathtakingly beautiful’ was created for. Be prepared to be held in thrall!

While I’m at it, and I know I’m totally pushing it with this one but you DO remember the Vikings right? And we all know that the Vikings came, saw and did a bit of conquering, ravishing and suchlike on the ‘auld sod? Coolio. To Ireland then and our final great escapee, Wyvern Lingo, three lush lasses from the seaside town of Bray, Co. Wicklow, garden of Ireland and home of the stunning Sugar Loaf Mountain and *cough* Andrew ‘Bring me to Church’ Hozier, whose music they have not only covered but with whom they’ve also toured. See, mine of info me.

WL, purveyors of ultra-slick-RnB-pop, have just released their debut EP through the Irish Rubyworks label, The Letter to Willow, from which we proudly present the song, ‘Beast at the Door’ with which I am madly in love, but know that I would be absolutely besotted with if this had a blast of brass! Can’t you just hear it on the chorus rise? Remarkably wonderful ’50s style vocals, perfectly grooved harmonies and wondrous instrumentation brings you a track that’s a little bit Amy Winehouse and a little bit Imelda May, and a lot of what is so truly awesome about the wonderland in which Wyvern Lingo inhabit.

The Great Exchange Festival runs in Brighton from 19th to 21st May. The ‘Wristband Exchange’ is open now, click here for details. 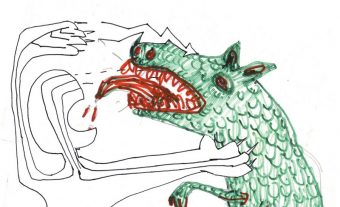