Suitably unflinching techno that doesn’t do a lot and to be honest doesn’t really need to. Nicholas Burman

The new album by Polish artist Brodka (her first in English) comes out on Friday, and ‘Santa Muerte’ is an auspicious taster. A strong composition enhanced by production that seems to curl up at the edges. Kier Wiater Carnihan

An Aussie-rap ode to the male arse? On paper this wasn’t one of the tracks I was expecting to enjoy most this week, but what seems like throwaway fun at first actually has a decent flow and bass hook, although the mastering could’ve provided a bit more oomph. KWC

A subtly unwinding tune that manages to sound slightly fraught despite its soft, slow appearance, probably thanks to the quiet drones that carry it along. Really nicely put together. KWC

Newham’s generous Fusion offers two-for-one with this video. ‘No’ is the keeper, sounding like a more brusque, fronting take on the minimal stylings of Novelist & Mumdance’s ‘1 Sec’, before bleeding smoothly into the rubbery ‘Rudeboy’. KWC

Me And My Drummer – Easy On Me

Absolutely loving the bells at the beginning of this track. In fact, I’d have been happier just listening to a loop of the first 16 seconds, as the rest of ‘Easy On Me’ doesn’t manage to make enough of a tune to do the intro justice. KWC

This kind of sounds like what I’d expect Cashmere Cat to produce if he had a bump of ketamine every time he entered the studio. ‘Holdin” starts off with an effervescent swing before periodically breaking down into slowed-down samples and stumbling snare patters. Frankly, every track this guy puts out gets me more and more intrigued; his new EP, due out in July, can’t come soon enough… KWC

Personally I felt a bit underwhelmed by the long-awaited new Skepta album – the singles are starting to sound a bit played out, and not many of the newer tracks manage to match them. This slick, simmering double-header by one of the most reliable producers in the grime scene actually came out about a month ago, but tbh I’ve been listening to it more than anything on Konnichiwa… KWC

Rina Sawayama – Where U Are (Toby Gale’s Hummingbird Remix)

I’m leaning towards the retroism of the original (cover) then this very stylised, future beats remix; saying that both versions would benefit for a bit of a kick up the backside / deviation at some point. NB

More old school than a public education system, what ‘Ocean Views’ lacks in originality it makes up for in bags of energy and a feature that (for once) lends something to the track, not overshadows or depletes the effect. NB

I generally quite like Tobacco’s productions without ever really loving them, but ‘Gods In Heat’ comes with an extra hit of grittiness and sass, and is all the better for it. KWC

Taking cues from the likes of Hellfyre Club, or even Death Grips, but bringing the left-leaning vocal styles to a more accessible beat, ‘Tin Can Motorbike’ is an intriguing prospect of cinematic scope a la Son Lux and aggressive vocals. Strangely great. NB 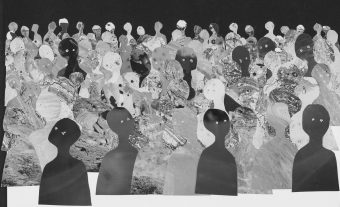 With Radiohead burning witches and Stormzy acting scary, it's no wonder Cerise is hiding in the shade of this week's Single-Minded...
Read More