The delightfully named Khünnt’s new release, Failures, is a 37-odd minute outpouring of gruelling stomach acid. By gruelling, I mean it sounds like being dipped head-first into a medieval well filled with ripe faecal sewage and pug-wash, as baying decrepit onlookers throw fresh fruit and rotting vegetables at your naked, spasming, vertically hung torso.

For those unfamiliar with the smoky doom of Khünnt here’s a very brief history. The band, which formed in 2006, is made up of members of noisy, psychedelicists Blown Out and dirge pounders Pigs Pigs Pigs Pigs Pigs Pigs Pigs. That alone should give you a certain handle on what Khünnt sound like – if not, check out the violent doom of 2013’s Brazen Bull or their 2014 self-titled album (Khünnt, obviously).

Released on the ever-dependable Riot Season records, Failures consists of one long continuous track which tests and baits the listener at every grubby turn. The first 10 minutes comprise a slow attrition groove. Building around a repetitive monotone guitar strum, the entire track eventually envelops the listener like swill quicksand. Its sound resembles the clitter-clang of steel armour crashing into harsh metal.

Then after the 10-minute mark the vocals kick in and from here-on much bad shit doth happen. The evil track takes violent umbrage with god knows what and starts flaying everything in its masturbation-deprived sight, its ugly, boiled face grunting and gurning in joy with every whack of each delicate skull it encounters.

The vocals land somewhere between disturbed pig-like squealing and the sound of someone trying to force their internal organs out of their throat through the sheer force of sound alone. The feeling of the whole track is one of being hung, drawn and quartered. Then cut up into even littler pieces and fed to hungry dogs.

Khünnt’s total control of abject, repetitive noise may put people off, this much is true. But if you’re going to listen to a band called ‘Khünnt’ what the fuck were you expecting? For any sick goyt that wants the aural equivalent of being flogged by a pointy-hatted cunt then Failures should do nicely indeed. Its bile vomit is injected deep into your ears by a medieval wankstain. Kicking and biting you repeatedly, and not in any way sensually, in whatever genitalia you may have.

Failures doesn’t so much evolve or progress over its span so much as swell and throb into existence like a fat lip.

As the track ends in scratchy, howling noise and guttural bellowing you come to realise it’s not one to listen to in the morning on your commute to work. It’ll just make you want to eat all of the letters on your keyboard and shit them out into a faecal sentence, which will coincidentally spell out the word ‘Failures’.

So yeah, Failures is an unbridled success in replicating the exhaustive sense of being dunked into a wooden barrel of sloshing piss-water as a bunch of slack-jawed bullock-chops stand by waiting to pick through your pockets once the life has left your brutalised body. It’s unpleasant, uncompromising and vile. I wouldn’t have it any other way. 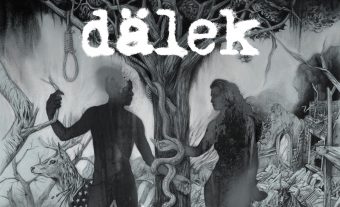 The returning Dälek take hip-hop and wrap it in wire wool on Asphalt For Eden, an album that oozes politicised anger from every scorched pore...
Read More