This week’s singles column sees us get in Gold Panda’s car, meet Velcro Hooks’ chinchilla woman and call Cadenza on Happa’s blackberreh. Or something.

If you miss Diplo circa 2011 you’ll probably enjoy this. Nicholas Burman

The squareglass collective are one of the more interesting groups to emerge from the South-East London art scene, BUNKI’s ‘self perpetuating’ music (I think I’ve remembered that description correctly) works much better live when it expands across 30 minutes. Nevertheless, ‘Turn’ is a decent addition to any playlist labelled: noise, ambient, pensive. NB

Cadenza brings formidable low-end to fluttery flute samples and blends them together into something of a Brazil-tinted banger. How it manages to remain both chirpy and dark I have no idea but Cadenza and Syv have produced something satisfyingly exotic. Kier Wiater Carnihan

The Coathangers exude fun like a Mr Whippy machine, and ‘Squeeki Tiki’ sticks a flake firmly in their punk dessert. The squeaky toy solo made the designer who shares our office literally whoop with joy. I’ve never heard him whoop with anything before, so that’s got to be a good sign. KWC

I almost didn’t finish the the first verse of this indie ditty by Hamburg trio Consolers but I’m glad I did as the chorus is great. Apparently it’s about a self-centred pizza delivery man, which surely only improves things. Ditto the comically sad coda. KWC

Gold Panda – In My Car

There are a lot of good songs about cars: ‘Get Outta My Dreams, Get Into My Car’ and ‘Jump In My Car’ are solid (uber)cheesy disco classics, to name but two. I’m not too sure what ‘In My Car’ has to do with cars, other than it would be quite nice to listen to while being driven in one. NB

Happa’s gurning techno is almost as unlistenable as it is addictive. There are building works taking place outside the office I’m currently sat in and to be honest if I turn my headphones down I can’t really tell where the men outside start and this stops. 9/10. NB

This is one of those tracks where the chorus makes the tune a lot less interesting than the verse suggested it would be, although the power pop finalé makes up for some of the lost interest. NB

There are a lot of producers who all sort of merge into one now – play this next to an AlunaGeorge track or pretty much anything off the Majestic YouTube channel and you’ll be hard pressed to differentiate between any of the artists. ‘Lines’ has a nice off-kilter melody running through it but suffers from a little too much gloss and too little heart IMO. NB

Brighton tape label Memorials of Distinction describe this as a fresh remix of ‘THE UNDERGROUND HIT OF 2015’. It’s extremely fresh to me as it was previously so underground I’d never heard of it. Apparently the solo project of one of the excellent Porridge Radio, it sounds like Maria Minerva covering a track off the recent Rexy re-release. (If all this just sounds like a bunch of obscure artists lumped together, then what I’m trying to say is it’s the breeziest, wooziest, snazziest lo-fi pop song I’ve heard for… well, too long.) Available on Memorials of Distinction’s Sentimental Journey compilation, here. KWC

Velcro Hooks have always know their way around a, erm, hook, but on ‘Chinchilla Woman’ you get two for the price of one. The verse is twisted and malevolent, the chorus is about as Britpop as it gets without being shit. KWC

I ended last year raving about Xeno & Oaklander’s 33-minute opus ‘Movements’, but this is a much more digestible offering for those put off by ambitious lengths and ambient excursions. In fact, ‘Marble is the best electro-pop single Ladytron never wrote. A shorter movement maybe, but no less enjoyable. KWC 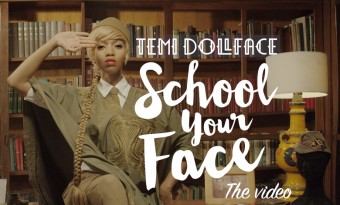 Ever wanted to know how to school your face? Well Temi Dollface has the answer, alongside the likes of Last Japan, Chelsea Wolfe and Shopping...
Read More