Hot Cold on the heels on my trip to mid-Norway to answer Trondheim’s Call, I hit off once again on the snowy* road to Oslo, to do a bit of by:Larming.

Shimmering against the iridescent ice crystals on wintry Norwegian pathways (Booker Prize nom coming on) were bright and multicoloured musical gems from across the Nordic rainbow! Denmark, Sweden, Iceland, Narnia, all were represented at the showcase spectacular that is the annual Oslo-based by:Larm festival. Running over four days, it’s a magnet for music industry types and a temporary hub for musical networking.

Featuring more artists than I could possibly mention and with tickets long sold out, each event was packed to the rafters, with barely room to twitch an elbow. The line-up across the four days was like a who’s who from the Nordic music genepool.

Smerz, Lowly, Liima, and Mavrick; Faenskap, Mads Langer, Bob Hund, and Dolores Haze; Susanna, Liss, Audur and Sea Lion were all present and correct amongst the 100+ artists playing by:Larm. That doesn’t include the several DJ gigs, off-, pre- and post-Larm events, not to mention the multitude of seminars, interviews and talks that were going on around the by:Larm pop-up campus. 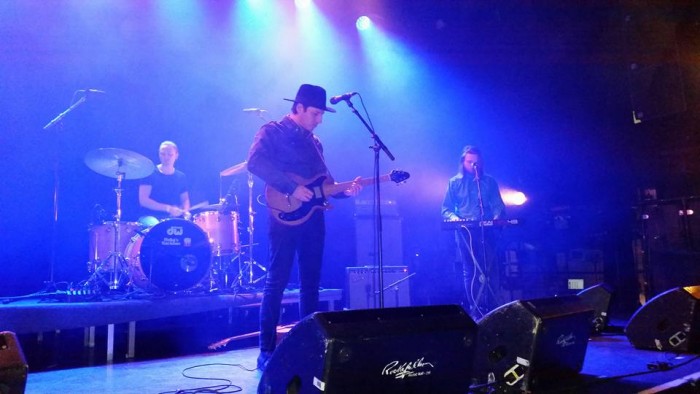 One such talk was a presentation by the genius that is Jarvis Cocker, he of Pulp, BBC6 Music and droll sarcasm fame. Entitled ‘Extra Ordinary’, it was a talk aimed at advising young musical wannabes on to how to set their inspiration-seeking antennae and adjust their mental dials towards the MHz of focus and motivation. The fact that this talk was: A) jammers; and B) attended by some of the biggest wigs in the music industry (I know this ‘cos I was sitting beside ‘em) served not only to give it a certain ‘gravitas’ but also underlined Mr C’s cult status amongst music personages and fans alike. Charming, hilariously deadpan and fluidly verbose, Cocker spoke for a full hour about his rise from schoolboy Ian McCullough/Elvis Costello doppelganger to hugely successful Pulp-ist, without once referring to that success in anything other than a deferential manner.

Elsewhere, one Mr. Wyndham Wallace, he of City Slang, Guardian, The Quietus and Lee Hazlewood fame, was having a tête-à-tête with one CJ Ramone in, appropriately enough, the ‘Vintage Gitar’ shop. Spotting the obvious, CJ is one of THE legendary Ramones of the late ’70s NYC punk scene, but being much younger than the original core members, didn’t join until much later in the day; 1989 to be exact. CJR proved to be one of the most amusing and hugely fascinating of raconteurs.

“What say you of the music”, I hear you cry (I have great hearing me!). Weeell, over my three nights a-giggin’ in da snow, these were my Polar top of the pops…

Night one, an off:Larm event at The Crossroad Club brokered an introduction with ’60s/’70s psychedelic rockers, Mats Wawa. Referencing every big name of the swinging sixties from Henry Mancini to the Grateful Dead, this humongously talented four-piece gave an energetic and entertaining performance that had the jammers crowd whooping for more – and on that note I’ll park up right there, leaving a note on my virtual windscreen that says “B.R.B”.

The other big draw on the night was NO FOREVERS signee Bellman, whose single ‘We Are The Guns’ garnered much praise from the Norwegian critics on its release late last year. Backed by one of the best troupes of supporting musicians I’ve heard since Daniel O’Donnell destroyed the Dome in Tralee many moons ago, Bellman produced an engaging and impassioned 30-minute performance, the highlight of which was forthcoming single ‘Coloured by You’, due for release on 11th April. 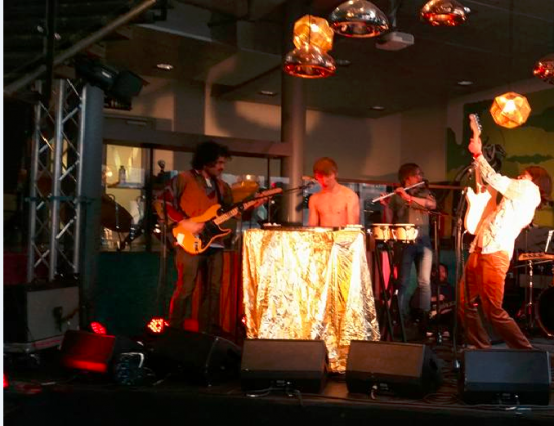 Day Two in the Big By:Larm House brought more Mats Wawa. An early morning stint at on-site V-Bar evoked an altogether more sparkling and dynamic performance. Obviously morning people, they were not just a few rungs up the ladder from the night before, they were a few ladders up in the musical scaffolding. Everything was bigger, bolder, better and without any technical glitches (which had somewhat hampered them the previous night) – this was a much tighter and more harmonious performance. The ease with which the band members play with each other was blindingly obvious, while the air of relaxed synergy was very palpable.

Nightfall brought one of my personal highlights – Trondheim band Østfrost, whose performance was nothing short of sublime; so much so that even the brimful of ennui PR manager accompanying me was impressed, and folks, he don’t impress easily. Vocalist Ane Bjerkan was in sparky form, giving a much more confident and interactive delivery than when I saw her sing previously in Trondheim. Instrumentally, the band was much tighter, and excepting the odd slip, played a pretty perfect instrumental accompaniment to Bjerkan’s delightful vocals. Scoring seriously good renditions of favourites such as ‘I Don’t Want To Stop’ and ‘When They Leave’ the band rounded off their superb 30-minute set with hit song, ‘Wooden Floors’. Østfrost will be releasing new music in the summer, and I for one can’t wait!

Disappointment of the night, and indeed of the festival, came at the Revolver venue where we went to see Danish band Blaue Blume. The venue was too small, too low and too packed for this marvellous band. It was uncomfortable, the acoustics were poor and irritatingly there was a constant ebb and flow through the super-squashed crowd. Halfway through one of my favourite songs, ‘Sky’, we realised we just couldn’t take any more and left. #Gutted. Why in the name of God someone decided to put one of the biggest draws of the festival in a low-ceilinged off-road shed is beyond me.

The gig of the night came from Bergen boys, the psych-sounding, glam-rockin’ Electric Eye whose second album, Different Sun, was released early February to much critical acclaim. Their last gig before they head off to the sunnier climes of Texas to play the monster that is SXSW, this gave new meaning to the term ‘rocket fuel’ – EE ripped the roof off the Uhort venue they were playing! With just four songs, albeit ones with seriously extended instrumentals, they had the crowd eating out of their hot and sweaty palms.

They kicked off with an uber-extended version of ‘6am’ which had men of a certain age pogo-ing like teenagers on a Red Bull drip. By the time they eased it into oblivion we were dripping sweat as one. Playing to one of the biggest and certainly most pulsating crowds of the festival, this was one bloody good gig. Ripping into their set, they tore each track apart, finishing with their latest single, ‘Mercury Rise’, five-odd minutes of ’70s glam decadence in homage to one Mr. Marc Bolan and the be-sequined T-Rex. By the time their set finished I could no longer feel my ears and my blood thought I’d taken on the mantle of Olympic sprinter it was racing that fast. In a word: glorious.

Day three and the final night of by:Larm brought more disappointment in the form of a full house and closed door at St. Edmund’s Church for the Mette Henriette gig: there were tears! I had waited so long to see this musician: oh heartache, I felt thy pain deeply. There was nothing for it but the bar.

Anon, as they say, I was to be found ensconced in the venue known as Rockefeller. Probably one of, if not the biggest of the venues in Oslo, this dark and dusky auditorium played host to one of the best bands to come out of the rain-spattered streets of Copenhagen – Palace Winter.

Fresh from the success of their debut EP, Palace Winter have been furiously gigging around Europe, taking in some of the best festivals along the way. Having just released ‘Positron’, the lead track from their upcoming debut album Waiting for the World to Turn (itself due to drop into the welcome arms of the musicverse in June), these boys were super-psyched and positively on fire. Their set was nothing short of spectacular, made all the more impressive by the fact that ever-smiling front man Carl Coleman was suffering from a serious bout of flu!

Rocking their way through album tracks ‘HW Running’ and single ‘Positron’, as well as their huge 2015 hit ‘Menton’, they whipped up an electrical storm that zipped its way around the auditorium, gathering momentum then fed back from the audience, continuously energising the band. Star of the show was album track ‘Soft Machine’, a lush, slow song that offsets Coleman’s velvety, evocative vocal (and some seriously cavernous guitar chords) against Hesselager’s dreamy, almost otherworldly spacious synth sequences. ‘Soft Machine’ was as much a triumph on the night, as Palace Winter was of the festival. That a Danish band should stand out head and shoulders should come as no surprise to anyone who’s heard of a certain Danish beer… If they did bands, it’d probably be Palace Winter.

That’s the long and long of it folks. Three days and nights, a multitude of bands, a lorra lorra music, endless toilet queues, red heels from the mileage and not a herring in sight. If you ever dabbled with the idea of going to a Euro festival, chalk by:Larm down as a top three consideration. Well run, precisely organised and manned by charmingly friendly festival and venue staff, by:Larm 2016 was possibly one of the best festivals I’ve ever attended, and will remain so… at least until by:Larm 2017! 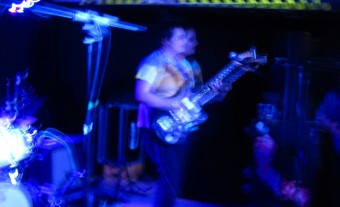 Why do North American alt-rock bands so often excel at delivering the goods live? Jake Smith isn't sure, but Palehound provide more proof for his theory...
Read More