Formed in 2003, MUGSTAR have been knocking out excellently propulsive records and live shows ever since. Last year saw the band release Start From Zero, a collaboration with Damo Suzuki, vocalist of German Krautrock legends CAN. MUGSTAR also began sessions at Liverpool’s Whitewood Studios, jamming and improvising material, which would soon become the sprawling Magnetic Seasons. A fitting title as this is a very attractive way to spend your time.

The excellently titled ‘Flemish Weave’ (come on now) is a repetitive post-punk Krautrock magic show. A spy drama set in some hazily imagined Moroccan village, a delicious Auburn mystery seen through the damaged lens of decayed time. With Magnetic Seasons, MUGSTAR create images and massage them sensually into your brain tissue with delicate fingers.

‘Time Machine’ also sounds suitably spyish; a well dodgy bassline kicks about in the corners of the track, looking shifty. It wants to nick your wallet and your secrets. Yeah, even that one. Delicious psych-guitar is peddled hard into your gaping gob, so hard and with such gusto it sounds like it was painful to play. It’s right righteous. Eventually the song’s inner spy catches up with its inner criminal, pockets full of stolen secrets, and spends the last few minutes of the track duffing itself up. Metaphorically-like.

From start to finish Magnetic Seasons is a rich and rewarding experience, unravelling and unfolding itself (or should that be ‘unbuttoning its large spy overcoat and revealing itself’, guffaw) further and further with every listen.

15-minute slow-burner ‘Remember the Breathing’ has a Bladerunner-like revelatory quality, but it makes much more sense than Ridley Scott’s bloated, if beautiful, mess. It has a Vangelis-style ephemeral feel as trickling symbols welcome oncoming bass while snares march in. Keys swell and ebb before the song itself is kicked into a mangled repeated Joy Division-esque rhythmic tick. It’s as if the song itself were made of self-meshing wicker, distorting itself into pleasing shapes and more solid forms. Organic yet tough, like reaching into a burnt hole in an old oak tree and finding a diamond.

‘Sky West & Crooked’ starts like a transmission from the moon. A secret whispered from afar, mouthed with such a candid intimacy as to make you blush. An ornate porcelain replica Luna, entrusted to your clumsy mitts to keep safe, gifted happily in the knowledge that you will more than likely fail. It’s well nice.

Final track ‘Ascension Island’ begins with a spoken-word detailing a magical escape from reality. An Eighties home computer warping a reality hypnotic as you wait patiently for the cassette-tape to load a new game. This could take a while. Sleep-encrusted eyes draw to a close and you’re left with a wonderful sense of calm. Did the game ever load? Does it matter?

Magnetic Seasons looks after you, wraps you up in a nice warm duvet, holds your hand and guides you gently through its various dizzy heights and levels. Let it sling its vast arms around you and bring you in for a warming cuddle. 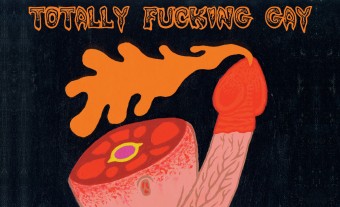 Comedy pop grindcore act Totally Fucking Gay live up to their name with songs like 'Ambassador of Ass', but the lurid carousel proves too much for Alex Platt...
Read More