It’s not often an artist has the confidence to put high concepts and philosophical debate into a debut EP, do it well, and garner industry attention because of it. Perhaps in this post-To Pimp A Butterfly world we’ve become a little more inclined to the idea that music can be about something, and, importantly, if someone is utilising a microphone, maybe it should be.

Released on PUSHCRAYONS, the imprint that houses Kojey Radical’s general creative output alongside artists such as Stephanie Kane, 23 Winters follows the impressive videos for ‘Bambu’ and ‘Open Hand’ from last year and brings those tracks into a ten track digital release which feels more like a first-draft album than a traditional EP release, though the quality is as high as you’d expect from an artist who has so far micromanaged every inch of his output.

Conceptually, Kojey Radical juxtaposes two things. One is his Ghanaian heritage, the stories of which are told via the inclusion of recorded conversations with his Dad placed throughout the record, and the second is commentary on his hometown of Hackney, East London. Both ‘Bambu’ and ‘Rents Due’ produce striking illustrations of the person on the street vs. the unknown 1% in an environment where flawed individuals (including, a lot of the time, Kojey Radical himself) fight the age-old battle of nature vs nurture. The sense of aggression is heightened by his growling, scowling delivery.

‘Love’s Interlude’, ‘Love’s Intervention’ and ‘Selfish’ take the release towards more romantic quarters. KZ The Producer’s warm, jazz-inflected beats nod towards Young Fathers (especially with the inclusion of Kojo Adu Genfi Amponsah Sr.’s soulful vocals) and leave space for Kojey Radical to spit his most personal bars. ‘Selfish’ is as close as he gets to a traditional love song, although the much more ambient ‘Interlude’ manages to tug on the heart strings a little more effectively.

It’s still last year’s ‘Open Hand’, the video for which was premiered at the Tate Britain, that packs the greatest punch. The sparse yet punchy production from New Machine frames some of the best lines from the lyric sheet (“flowers grow and petals fall from mountains surrounded by estates and suburban terrace housing”). It’s not often Gil Scott-Heron is referenced by someone who may actually be worthy of being associated with the grand social commentator himself, but Kojey Radical has the ability to write lyrics and formulate characters, imagery and concepts to a standard that makes you think that, in this case, the comparison is justified.

‘Kwame Nkrumah’, named after the man who helped lead Ghana to independence from Britain in 1957, summarises the conversations with his dad, the self-produced tutorials of self-love and confidence, and social commentary (“By far the greatest wrongs are inflicted on self, the weight of our opinions are dictated by wealth”) before the EP is rounded off with a return to minimalism and ‘Musafa’s Outro’, where his father recounts the story of the day Ghana gained independence over a solemn piano lament, which finally flitters away into the digital distance.

With this much context and personal perspective to take into account, reviewing something like 23 Winters seems a little daunting. In fact, just sitting down to listen to it feels more like indulging in a novella than being offered a pop-orientated distraction. However, its graceful bringing together of dub, trap, grime and minimalism with a very confident ability to lyrically weave narratives into tracks (and across the release as a whole) is the EP’s success.

This East Londoner doesn’t seem to be lacking confidence, energy or skill. That, alongside this genuinely quite epic effort, means I wait with baited breath, and open palms, for whatever’s coming up next.

La Sera - Music For Listening To Music To 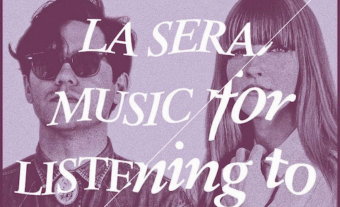