The first (and last) time I traipsed over to Oval Space was for the inaugural Visions Festival back in 2013. While the live space itself was impressive, the experience was mixed – largely because the mixing itself was so poor. I had to practically be on stage to hear Micachu and Tirzah’s set, whereas The Haxan Cloak, on immediately afterwards, was so loud you could’ve probably heard him in actual space never mind Oval Space.

While I’ve not deliberately avoided the venue since, perhaps the shoddy sound that day subconsciously made me wary of revisiting. However, the Shigeto gig they had lined up last Thursday was so strong that it could’ve taken place in the back of Adam Johnson’s car and I still would’ve patiently queued up to enter. The Michigan-born musician has attracted many plaudits for a live show that mixes live drums with synths and samples, but I’ve always conspired to miss him whenever he’s in town. Not this time.

Of the two I prefer Lord RAJA’s dubbier, smokier set, as his unpredictable rhythms seem to fit better with Shigeto’s approach than Heathered Pearls’ thumping 4/4 beats. Beauty is in the ear of the receiver though – I ask my gig companion Rory O’Brien (last seen on this site interviewing Dead Prez, and the man who first introduced me to Shigeto five years ago) his opinion on Heathered Pearls, and he only needs one word: “Banging”.

The atmosphere immediately shifts once Shigeto takes the stage. Multi-coloured lights, reminiscent of the cover to his No better Time Than Now album, illuminate kit both percussive and digital, as a Shigeto-shaped silhouette casually settles into place and a crystalline synth drone starts to build.

Shigeto is known for his love of jazz, and while his music is more frequently compared to electronic peers it quickly becomes clear that his live performances are indebted to less modern influences. From his first quiet, opening rolls down the kit, akin to a gymnast dusting down their palms as they prepare for an opening exercise, there’s a mercurial fluency uncommon at many electronic gigs.

Quite frankly, it’s a masterclass in atmospherics. Shigeto alters the sound slowly but deliberately, allowing for little ebbs and flows as he gradually builds the intensity. While you might expect the live percussive element to be the focus, which it is to some extent, he resists unnecessary displays of virtuosity, happy to sit on a relatively simple beat for as long as the track requires. I once saw Four Tet trying something similar with the legendary jazz drummer Steve Reid, but while Shigeto is no Steve Reid, what he produces is much more effective. (Obviously it’s a lot easier to collaborate with yourself than with another…)

At one point I notice Rory deep in conversation with a security guard at the side of the stage. At first I’m surprised he could be distracted from the action onstage, until he suddenly pulls me in too. Turns out he’s not talking but listening to the bloke freestyle his way through Shigeto’s beats – pretty damn well as it happens, especially considering the fluid rhythms he’s rapping over. I find out after the gig that his name is Biku (you can hear his latest single, ‘It’s Going Down’ featuring Rich T, here); thanks Biku for one of those perfect gig moments you just can’t account for.

Oblivious to the bars being thrown down just a few feet away from him, Shigeto ends his set to a pretty wild response – and gives the crowd one last sweet taste of what they came for. It’s worth noting that despite the jazzier and more ambient elements of his performance, the crowd is rarely static, with a lot more dancing going on than you’d expect after listening to his more recent records.

Oh, and the sound is solid throughout. Oval Space: I’ll be back. Especially if you book Shigeto again. 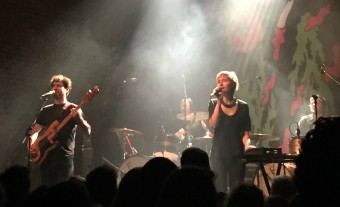