Walking into the spacious and incredibly tall-ceilinged Village Underground, my spirits and expectations were already at an equally high point. I had first stumbled across Poliça when a friend of mine showed me a song of theirs (‘TIFF’, the lead single from their second album Shulamith) which was coincidentally named after her and featured vocal contributions from Justin Vernon, of electro-folk royalty Bon Iver. The song hooked me straight away, the multiple-vocal layering (with added auto-tune, a classic Vernon calling card) and dreamy shimmering synths coaxing me into wanting to hear more. A few years and multiple album listens later, I can say without a doubt that I am a solid Poliça fan.

So it was with those years gently rotating in my head that I entered the sold-out venue for what I could only assume was going to be a fantastic show, and I was not disappointed. As a big beats remix of ‘I’m On Fire’ by Bruce Springsteen was spun by the DJ opening for them (a personal favourite of mine from The Boss; we were off to an excellent start), I took my place within the crowd; slightly to the left and a bit far back from the stage, but at a respectable distance (my height is always a great advantage for sold out shows). After a few more songs that the audience didn’t seem to react to much (after all, nobody was really there for the DJ), the lights dimmed, the back door slid open and Poliça took to the stage.

Bathed in streaks of multicoloured light, the band cut an interesting shape. Lead singer Channy Leaneagh and bassist/backing singer Chris Bierden took front-of-stage duties, sticking very strictly to their own sides (hers right, his left) with the power of the dual drummers Drew Christopherson and Ben Ivascu filling the back of the stage. I’d never seen Poliça live, and was interested to see how they’d incorporate their unique studio sound into a live set.

Jumping straight into new song ‘Summer Please’ (from the upcoming album United Crushers), Leaneagh’s vocals were coated in an over-abundance of auto-tune, so much so that her voice took on a sharp edge, similar to Australian popstress Sia. This was of course with purpose, and she utilised her voice as her own instrument, hitting pedals to subtly distort and warp her tone. Leaneagh’s voice is an incredibly powerful asset to the band, filling the entire venue and never hitting a bum note.

Poliça mainly dropped songs from their new album, so there wasn’t much audience reaction at the beginning – but by the end of each song they had us eating out of the palm of their hands. Four songs in and the familiar opening pulsing beat of ‘TIFF’ hit us and the audience went wild, great shouts and whoops and head-bopping. They played ‘Wandering Star’ a few songs later too, with much acclaim. It seemed the oldies were the goodies.

Despite that, the new material sounded fantastic, in particular ‘Fish’, which Leaneagh claims is like a personal diary entry about her baby and pregnancy. It makes me very excited for the new album, with Leaneagh’s voice as powerful and attention-demanding as ever, especially mixed with the constant yet ever-changing lights which bathed Poliça in a rainbow swirl. 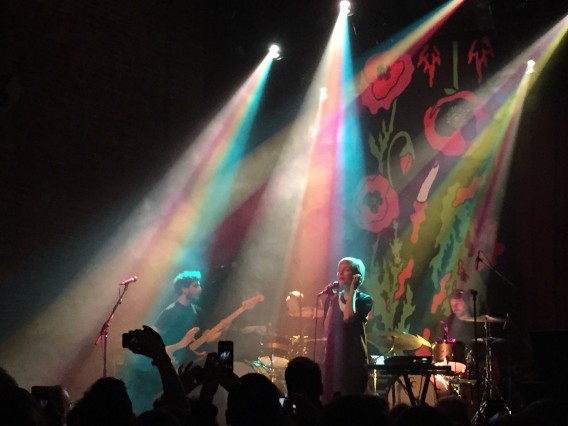 Despite her incredible voice, Leaneagh’s stage presence is utterly bizarre, her arm constantly jerking along to the lyrics, almost letting loose but not quite. In the moments she wasn’t singing, a sombre look spread across her face as she stared out at the audience, waiting for her next line. It was like Nick Cave’s arms mixed with a disappointed substitute teacher who thought she had just established a connection with you until you misbehaved at the back of the class.

To their credit the rest of the band soared through it. Bierden in particular seemed to have the most amount of fun he’d had in a long time, his basslines guiding the rest of the band through each song. During the end of ‘Wandering Star’ he took over vocal duties for a few lines and the place erupted with applause, followed by a huge grin plastered across his face.

I’ve never seen a band live that had two drummers and at first I must admit I was sceptical, but I was soon proved wrong. Christopherson and Ivascu were so incredibly on point it’s almost impossible to fault them. They were able to play in complete sync and then break off to do their own little part, only to merge seamlessly back into sync once again. With the addition of Leaneagh’s voice, Poliça were an incredibly tight outfit, not a note or beat put wrong.

My only complaint would be the use of pre-recorded beats, of which there were far too many. I understand the bass and drums form the rhythm and tempo of the track, and that they are a necessary element, but Poliça’s songs are all composed of an electro backing rhythm which was blasted out of the venue’s PA system. It would’ve been far more impressive to see them play it fully live, and I felt somewhat cheated out of the full experience. Still, it obviously seems to be working for them and I’m not one to try to fix something that’s not broken – this is merely a personal preference.

Poliça, you’ve won this one, and I for one am definitely glad you’re all playing for keeps. 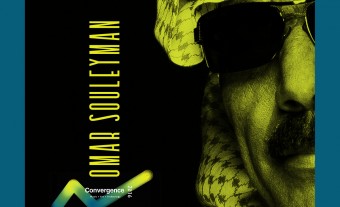 Win tickets to see Syria superstar Omar Souleyman alongside Clap! Clap! and Simbiosi this March, as part of the awesome line-up for Convergence 2016...
Read More