This was the week when the world said goodbye to one musical Jones and hello to another.

The week began with the sad news that David Jones, otherwise known throughout the galaxy as David Bowie, had left our planet Earth and floated off into the stratosphere to take his honourable place amongst the Greek gods of astronomy. The music world was in shock, and the tributes came pouring out like water from a tap of overwhelming warmth and respect. Personally, I was bloody devastated by the news.

Thankfully the Jones name was left in good hands, and the sadness would be lifted on this most rainy of rainy Wednesday nights, tucked away in the hidden industrial piping of Angel’s Electrowerkz. Meilyr Jones, the former frontman of indie band Race Horses, now embarking on a solo career, is here to give us all reason to be cheerful.

Before Jones took to the stage the crowd was warmed by the beautiful whimsical voice of Laura J Martin. Her jagged flute stabs and pounding drums work well together and her voice carries great melancholy and whimsy, but ultimately during her short set the songs felt promising but not quite fully satisfying. Like a bag of multi-pack crisps in a packed lunch, you enjoy whilst gorging but are left wanting more.

There then appeared to be an issue with the sound-desk and viola levels during soundcheck, which saw Meilyr Jones and his band waiting on the small stage, cramped together and looking at a bit of loose end whilst they waited for the issue to be resolved.

The audience were getting a bit twitchy and restless. As filler we must’ve heard the theme music to The Strange World of Gurney Slade (if you don’t know what that is go and check it out immediately, Bowie was a massive fan, so…) about five times as we waited. Still, could be worse, could’ve been the theme to the abysmal The Inbetweeners, so small mercies aye?

‘Can you change the atmosphere of a room with the click of a finger?’ Jones asks the sold-out Electrowerkz before lifting the crowd with the excellent Dexy’s soul stomp of single ‘How to Recognise a Work of Art’. Any gloom in the room is well and truly dispersed, not with the click of a finger, but with a bloody great trumpet whack. The wry, humorous lyrics perfectly illustrate Meilyr Jones’ great knack for turns of phrase and attention to small detail, married to rich vocal melodies.

It’s a great way to start a party and Jones proves to be a winning host as he and his excellent band steer the audience through his many teeming musical ideas, which take us from one stylistic destination to the next. At points we stop off at indie-soul, beautiful piano ballads and Day-Glo pop triumphs. When the music’s playing he’s like a young Jarvis Cocker, wriggling about on stage with all the passion of a diva-preacher.

In fact the songs bring to mind the good old days of lyrical indie glam; before the loutish alcopop-addled Britpop bandwagon came rolling down the musical hill and crushed any semblance of creativity lurking on the pavement, in a green cloud of shit mod haircuts and ill-fitting Oasis knock-off parkas.

Towards the end of the set Jones addresses the elephant in the room, introducing the next song as: “Usually dedicated to our viola player Richard Jones, but tonight it’s dedicated to ‘another Jones’.”

I’m not going to lie, it took me a while to realise what he was getting at (I’d had a few), but once the band launched into the opening riff of Bowie’s ‘Rebel Rebel’, the penny dropped and the band were in full swing. Their spacey, transcendent cover is sublime, Meilyr Jones taking to the audience as he individually introduces the full band, and it felt like a fitting (and not contrived) tribute to the departed Thin White Duke.

The B-side to ‘How to Recognise a Work of Art’ – ‘All is Equal in Love’ – is just lovely. Here Meilyr Jones’ deep Paul Heaton-esque vocal and ear for a catchy melody was genuinely thrilling. It’s a proper sway-a-long. The songs from tonight’s set all lead to what is looking likely to be a very promising debut album, and having heard them live I’m now deeply intrigued to see how he has captured their energy on record.

With the album, titled 2013, not released until 26th February (via Moshi Moshi) it’s inevitably the recent singles that get the biggest response tonight. However, I get the feeling that a large part of the audience have seen Meilyr Jones perform before, and I imagine we will all be seeing a lot more of him in the future.

This Is The Kit turn Scala into 'hippy living room' 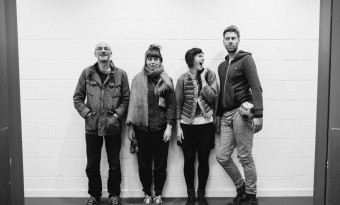 This Is The Kit's folksy charm leaves Emma Hall feeling all warm and wobbly (which is more than can be said for the Scala's £5 cans of Red Stripe...)
Read More