Alright. Hands up. I expected this to be shite. In 2013 I seemed to be one of the few people who thought The Next Day was bang average (which I still stand by), and so just assumed David Bowie’s next reappearance would be equally underwhelming.

More fool me then, because ‘Blackstar’ is bloody great, as bizarre and unexpected as The Next Day was bland and unimaginative. A labyrinthine ten-minute overture that stops at latter day Scott Walker, Aphex Twin, Jan Garbarek, Eels, McAlmont & Butler and about a hundred other seemingly unconnected stations, it’s EXACTLY the sort of thing you want David Bowie to be making in his twilight years – creepy, uncompromising, and ever so slightly camp. Apparently the album is also influenced by Kendrick Lamar and Death Grips, which seems unlikely… but after this, who knows? Kier Wiater Carnihan

Dråpe – Round And Around

More light-as-a-feather dreaminess from Dråpe, who seem to be locked into a challenge with their countrymen Gold Celeste to see which of them can produce the fluffiest psychedelia Norway’s ever seen. With ‘Round And Round’, Dråpe may have just taken the lead… KWC

This Geordie producer’s label project Spontaneous Rhythm has got some love from us before, so I’m pretty happy to hear he’s finally got round to releasing some of his own productions again. ‘Overveen’ is a sprawling techno-inflected slice of electronica, and if his debut album can keep up the engrossing pace then we’re onto an early 2016 winner. NB

It was literally only yesterday that I heard someone on the radio mention that Kate Tempest is in the middle of writing her first novel, and thought, “damn, guess we won’t be hearing any new music from her for a while then.” Seems I couldn’t have been much more wrong, although the topical nature of ‘Europe Is Lost’ means it’s not exactly a track that could’ve been left to rot – indeed, Kate Tempest performs it as if she couldn’t keep her words in for a second longer.

Kicking off with a percussive, detuned guitar that offers a presumably intentional middle-eastern flavour, it begins with a typically Tempest focus on the dull, slowly suffocating frustration of modern living. However, the track soon steps back and shifts the focus onto a bigger (but not very beautiful) picture, contrasting the violence of societal structures with the reflective vacuity of mainstream culture: “Bullshit saccharine ballads / And selfies / And selfies / And selfies…”

It’s a bleak summation of the “land where nobody gives a fuck,” and the worst thing is it’s hard right now to paint a more positive picture. Then again it’s clear that Kate Tempest does give a fuck, and eloquent, emotionally honest responses like this are a small but important shield for the soul, as the world prepares to the gun on itself yet again. KWC

A couple of weeks late featuring this, and normally I’d wait till the next single to talk about an interesting artist, but the truth is Kojey Radical is (surprisingly) as radical he claims. While musically midway between Woodkid and grime, it’s his lyrics which raise this above the cattle, “where they see weeds we see seeds, see / We no longer need to close our fists” being a particular highlight. By skewing the classic imagery of the raised fist which has run through popular and political culture since the first half of the 20th century (and possibly since the 14th), he manages to focus on themes with a particularly 21st century eye. Radical. NB

It’s been good to hear Warp getting a bit weirder again at the tail end of 2015, and ‘TAN’ is a suitably off-kilter track. Alongside recent releases from Oneohtrix Point Never and Kelela, they could do a pretty impressive label tour right now (is that a thing?) NB

So digital artwork is back. That’s a thing now. Luckily, as we’ve mentioned quite a bit recently, so are scattershot beats. Whoopee. This edges into maximalism a little too much for my taste but is a spunky single nonetheless. NB

President T. feat XP – I Don’t Give A Monkeys

One of the best title-fight-entrance-music-style grime tracks I’ve heard in a while, with President T’s deep-voiced, laconic flow contrasting nicely with the blaring brass samples. It’s XP who provides the best bars of the track though, with his “Born in the ’80s, never been a dickhead” lyric definitely a t-shirt slogan waiting to happen (and one of two excellent uses of the term in grime this week, along with Maxsta’s ‘Mare Street Dick Head’).

I’m all for a bit of moody Interpol-ing, but to do that you need to be offering something more than just the ability to crescendo, like close-to-psychopathic lyrics or basslines which are impossible not to get hooked by. In many senses, ‘Autopilot’ is aptly named. NB

If I say this sounds like Macklemore will someone find where I live and hurt me? NB

I heard this on the radio before I knew it was from the soundtrack to the upcoming Spike Lee ‘joint’ Chi-Raq. I was already looking forward to the film but knowing the quality of the tunes included may be this high has me positively ecstatic, considering how well he integrated music into Do The Right Thing. NB

I’ve got a soft spot for electronic music that sounds like a coked-up hummingbird’s heart palpitations, and Zora Jones definitely delivers on that front. ‘First Light’ is like a restrained footwork remix of the new Grimes stuff, created by someone who knows that what you take out is often more important than what you put in. KWC 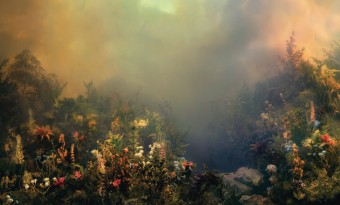 Our latest Rock 'n' Stroll column sees Emma Hall braving a blustery November armed with the finest albums autumn has to offer, including the latest from Farao and Teeth of the Sea...
Read More