From Indonesian psych to Danish rave, here are the ten best EPs we received last month…

We already favourably reviewed the lead track from this EP last month, but how does the rest of Cheatah’s Murasaki EP fare? Pretty well on the whole is the answer; even if nothing quite matches the superb, speeding-down-the-motorway shoegaze of the title track.

‘Warm Palms’ is the next best number, starting off like Liars’ ‘Be Quiet Mt. Heart Attack!’, moving through a faint synth echo of Berlin’s ‘Take My Breath Away’, then switching between stomping indie and twisted time signatures – and all in under three minutes. ‘3D Milk’ then squelches through a swamp of digital debris towards the sunnier sounds of ‘Wash Out’, which finishes off Cheatah’s second EP of the year following February’s Sunne. As things stand, they’re still on an upward trajectory.

The euphoric, percussive sounds of South London producer Cold Courage first caught our ears back in February, and this six-track EP shows why he’s one to watch. Gold Panda fans will find much to enjoy in the title track, and the thumping, muscular production of ‘Brother’ stops the emotive vocal and piano elements from becoming too cloying.

Similarly, ‘Illusory’ starts off seeming like it’s too ethereal to really grab your attention, before a hectic beat shakes it up like a speed freak grabbing a snow globe, while the gently bubbling ‘Aftermath’ finds itself boiling over once the beat kicks in (although it’s the way the coda gently ebbs away which really impresses).

In such company, closing track ‘Lydian Line’ stands out by not really standing out, only briefly adding a hushed rhythm to its ambient meandering. Still, if you’ve not found yourself immune to Jon Hopkins’ Immunity album, Cold Courage provides a comparably deep experience.

There was a period following the release of Four Tet’s Rounds when the term ‘folktronica’ was on everybody’s lips. Bristol’s Isolde seemingly seeks to satisfy listeners missing the likes of Tunng, and her debut EP suggests she’ll succeed.

The title track combines her soulful vocal range with production that seems to crunch like (FKA?) twigs underfoot, while the jazzier ‘Sweet Tooth’ is lounge music with a reedy twist. Two versions of ‘Kismet’ complete the EP, with Lee J. Malcolm’s remix slicing up some of the vocals and adding a little rhythmic thrust to the original’s acoustic drift. You may not hear many people mentioning folktronica these days, but Isolde’s music seems bound to bloom regardless.

‘Part 1’ takes its time exploring its foundations before uncovering a euphoric edge, while ‘Part 2’ adds a decelerated rave beat and some sad vocoder action to make sure that both sides of the ‘Skydancer’ coin remain distinctive. The nostalgic touch and more amorphous nature of ‘Part 2’ make it my favourite, but both bits comprise a welcome return.

At forty minutes and forty seconds this probably constitutes an album rather than an EP, but seeing as the kooky Aussie septet have split those minutes into four equal tracks (hence the ‘Quarters’ of the title), I’m going to review it here anyway. While the end result is less sweaty and furious than last year’s excellent Inside Your Mind Fuzz album, Quarters nonetheless paints from a wider palette, while retaining the same dusty, analogue production that gave its forebear such warmth.

Impressively, considering each one is stretched beyond the ten minute mark, the tracks rarely outstay their welcome. The 5/4 jazz-rock of ‘The River’ kicks things off in jaunty style, while the assured, languid strut of ‘Infinite Rise’ sees them performing better at a slower tempo than they’ve possibly ever managed before, complete with the sound of laughter and a rooster crowing. ‘God Is In The Rhythm’ is a little ‘Ariel Pink plays ‘Happiness Is A Warm Gun” for me, but the leisurely magic carpet ride of ‘Lonely Steel Sheet Flyer’ soon finds them back on a blissful course. Definitely the four best 10m10s tracks you’ll hear this year.

Drawing from a similar pool of influences as King Gizzard & The Lizard Wizard, Indonesian four-piece Napolleon’s eponymous EP is blessed not only with similarly authentic production, but just as much psychedelic energy as their Australian peers. The fizzing garage rock of ‘Infinite Loop’ is exceptional even before descending a twisted staircase into a misshapen reflection of Pink Floyd’s ‘Interstellar Overdrive’, while ‘Rendezvous’ rocks with the headstrong hardiness of four men drunkenly rowing a dinghy across the Timor Sea.

‘Seeing Believing’ sails on a calmer ocean, although after a while it does start to feel like Napolleon have lost their compass somewhere in their box of effects pedals. Luckily the gritter ‘Erasable Eraser’ ensures things finish on a high, bending itself in and out of shape like silly putty. I didn’t expect the best garage/psych revival EP of the year to come from Bandung, but as we approach 2015’s halfway point it’s looking more and more likely.

Radioactive Man’s White Light Monochrome got a multiple thumbs up from our coalition of reviewers when it was released at the arse-end of last year, and this collection of remixes proves a satisfying stop-gap as we await new material.

While dBridge’s seven-minute version of the title track feels a little flat, Jerome Hill’s funky as hell reworking of ‘Space Ranger’ tosses up serving after serving of techno treats, like an acid Andy Murray. Shengi’s remix ‘Mechanical Music Menace’ is the real stand-out though, slowing down the tinkling and whirring elements of the original and allowing them to be appreciated anew.

Brighton’s Lost Tribe Records have put out some great records over the last year or so, and this continues the trend. Chicago teenagers Tsaik have already acquired some neat production tricks, and while opening track ‘Pendant Drop’ is (literally) a little drippy, the title track’s mellow atmosphere and well judged sampling makes it glitter like a precious jewel.

The EP’s mixture of field recordings and laptop electronics recalls the techniques behind the recent Dusun Sessions compilation, and has a similarly meditative tone too. The glowing ‘Fuzzy Holo Demoop’ wraps things up nicely, leaving the tantalising prospect of an album due later in the year.

TWRK’s brand of EDM-influenced trap can be impossible to stomach when it’s done badly (i.e. most of the time), but the Mad Decent duo manage to get it just right on ‘Helicopter’, which combines heroic brass flourishes with a ridiculous vocal hook. If you think ‘Crazy Frog goes trap’ sounds like a throat-slittingly awful prospect well, against all the odds, you’re wrong. It’s too much fun to even pretend to hate.

‘Make It Bounce’ is much more on the nose but still just about bearable, but if the title of ‘Spring Break’ suggests a garish, lowest-common-denominator drop-a-thon, then the song more than fulfils its shabby promise. It’s a shame because on ‘Helicopter’ TWRK prove they’re capable of genuinely enjoyable trap anthems, and closing track ‘Dump It’ is better than most of the tracks on, say, the new Hudson Mohawke album.

With records like Trans-Europe Express, Kraftwerk tried to replicate the rhythm and feel of modern transport using synthesizers and drum machines. Leipzig’s Weber manages to achieve a similar effect on his latest EP, with the slick, shadowy ‘Sklt’ like being smoothly sped down an empty autobahn, at night, forever.

While not everything on Zwei has that same effortless feel (although the 12-minute long ‘Warten’ gives it a good go), ‘Sklt’ isn’t the only highlight. ‘The Bug’ features the only human voice on the EP, yet still feels curiously isolated, like a heartbroken man pouring out his misery to four blank walls. It’s a beautifully executed track, much like what I was hoping the new Colder material would sound like. The only disappointment is that it fades out so suddenly, before ‘No4’ sees things out in subdued fashion. Still, the flashes of brilliance evident on Zwei bodes well for Drei, Vier, Funf and beyond…

Single-Minded: Getting higher on Kelpe's 'Valerian' 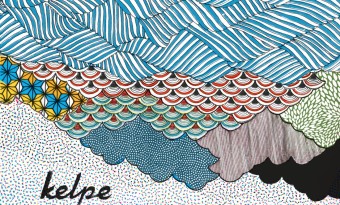 The most fun you can have without taking herbal valium, this week's Single-Minded features everything from syrupy house to Bolivian feminist anthems...
Read More