Leftfield were, for me, one of the most important bands of the ’90s. I don’t mean that in a “they changed the game” kind of way, although they may well have done so. What I mean is that for me, twenty years ago, they were a band you could bond with almost anyone over and that was important then.

The first gig I ever paid to see with my own money (well, probably student loan money, you know what I mean) was Leftfield’s show at the Leeds Town & Country Club in April 1996. It’s difficult to remember much about that show now, except that the girl I was trying, with desperate naivety, to pull ended up sitting on my shoulders rather than in my arms and that it was loud. Like, really, really loud. And, although this may just be my memory, it seemed to take place in a total fog as two guys went about their work on stage. I remember my mate Karl breathlessly exclaiming afterwards that it was the closest you could get to a rave without actually going to one. (Or was that a year later when he went to see the Prodigy in Manchester? On balance, the latter, I think.)

Anyway. Fast forward four years to the sequel; the Rhythm & Stealth tour. Again at the Leeds T&CC, but this time there were lights. There was even a guest vocalist (possibly a couple), and me and my mate Wayne had to each buy ourselves a knock-off t-shirt after the gig as the ones we had been wearing were drenched after our exertions.

Two weeks ago I wasn’t that bothered there was a new Leftfield album coming out. That apathy disappeared the second we fired up the live stream of the album. Somehow, Jo found tickets for a gig that had sold out weeks ago and so it came to pass that we found ourselves stood behind the mixing desk at the Forum, eagerly awaiting Neil Barnes’ arrival (Paul Daley having opted against involvement in Leftfield’s comeback).

At some point before the show started, I realised a toilet break would be necessary. Waiting in line, I listened to a guy talk about how he’d been waiting 16 years for this moment. He was possibly off his nut, but the excitement in the air felt tangible; you don’t get this at just any gig, people were genuinely thrilled to be there.

John Carpenter’s score from Assault On Precinct 13 served as rather awesome entrance music, and then Mr Barnes took over. Not that you could see much of him, or his percussionist, blocked as they were by the columns sitting on stage.

Now, I can’t talk too much about the tracks on Alternative Light Source – it’s my birthday next month and I’m banned from buying anything for myself before the big day. I can say that my lack of familiarity with the new songs didn’t dent my enjoyment of them, particularly set opener ‘Bad Radio’, which set things off at a gallop. There were three new tracks before ‘6/8 War’ battered the Forum doors down; followed by the arrival of MC Cheshire Cat and the skanking ‘Chant Of A Poor Man’, there was only way this night was headed.

Nicole Willis arrived to take it up a level with the menacing ‘Swords’. I say “menacing” but Willis’ performance, and the general arms-aloft vibe of the gig, lent the tune a strangely euphoric air. If I tell you that I’ve been unable to stop myself singing “I’m with my sword at my side” ever since Saturday night, perhaps that gives you some idea of what it was like.

‘Swords’ led into the towering dub of ‘Inspection (Check One)’, which meant more MC Cheshire Cat. It also meant me bellowing “COME ON!” at the top of my voice. (Well, it is my favourite Leftfield track.) By now, lost on a heady combination of alcohol, great tunes and the joy of nostalgia, I had lost myself. I could have been 18 again, if it wasn’t for the young lady, my young lady, swaying away in front of me. I wanted to “Check One” all night, I tell you. I found myself high-fiving the guy next to me, as he told me that all his favourite songs had been played.

And then… the 1999 collaboration with Afrika Bambaata, ‘Afrika Shox’. Just typing these words, all manner of feelings run through my mind and body. It felt, as with ‘Swords’ and ‘Inspection’, that the song would never end. Part of you never wanted it to, but another part of you wandered would come next. How could this be topped?

The answer, of course, was that it couldn’t. Not really. Not, all due respect, with a couple of tracks from the new album anyway. If there was a bit of a lull, that was okay.

For all Leftfield’s great work, they are perhaps most famous for the 91-second Guinness commercial with which Phat Planet was introduced to the world. And it was here that the show ended on a pulverising bassline. The words “Phat Planet” were strobed onto the columns in a way that evoked the breaking waves of that iconic commercial. The pure percussion of the track turned the Forum into a quivering wreck and that was that.

Neil Barnes, when he could find a working microphone, thanked us all for coming and with that, we were released into the night. Happily, no fresh t-shirts were required this time. 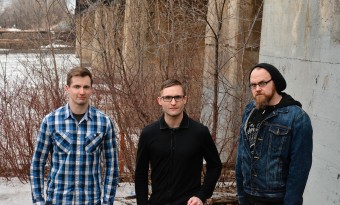 To celebrate KEN mode's new album, the band smash every audience member's house up with a sledgehammer. OK, not exactly, but they might as well have done...
Read More