Post-election blues dominates Single-Minded this week – can anything rouse Kier Wiater Carnihan and Nicholas Burman from their democratic slump?

Way too long, with a chorus that doesn’t deserve that much attention. Makes me wish Kylie and Madonna were just getting around to releasing their initial material. In fact, makes me wish everything was just a lot better. Nicholas Burman

Cheatahs are one of the few ‘nu-gaze’ bands who aren’t too busy polishing their effects pedals to write decent tunes. ‘Murasaki’ is another catchy number, although admittedly one that sounds heavily influenced by Super Furry Animals’ ‘Slow Life’; still, that’s a song I’ll gladly hear transposed into any genre you care to mention. Bonus points for pre-emptively dealing with any accusations of lazy Orientalism by apparently singing in Japanese. Kier Wiater Carnihan

The first minute of ‘Drowne’ promises something slightly more uplifting than the rest of it unfortunately reveals. File next to the likes of Odesza in ‘mid-tempo crowd-pleasers’. NB

Starts off like your average, tawdry singer-songwriter guff, but I have to admit the chorus won me over. In fact, I’m almost tempted to edit together a version that cuts out the verses and just repeats the chorus forever. Apparently the ‘sugarman’ in the lyrics is our long lost (well, not any more) friend Rodriguez, although even he’d struggle to produce anything this sweet. KWC

A decent grizzly beat over an enthusiastic JME and a guest verse from Giggs, whose well-paced and deep delivery works best when it’s allowed a bit of space alongside a collaborator’s verbosity. And any song that gives a shout out to tea gets a 10/10 from me. NB

Jenny Hval – That Battle Is Over

I like the way you can never really be sure how Jenny Hval will deliver a particular line, but I like the lines themselves even better. Sadly, this one fits the current mood in Britain all too well following last week’s election: “The battle is over / And feminism’s over / And socialism’s over.” Still, at least we’ve got something to listen to while we lick our wounds. KWC

The slightly off-key guitar slides of DeMarco always leaves me feeling a bit romantic, and he’s become pretty pro at doing the ‘Mac DeMarco’ thing as this song demonstrates. Let’s hope this upcoming stop-gap mini album is a fan-pleaser before his next record sees him (hopefully) step out of his comfort zone a little bit. NB

This is taken from Kitsuné’s fourth America compilation, which aims to take “a fresh and ambitious look at familiar Americana”. The fact that Metoux is actually Canadian doesn’t seem to matter too much, and nor does the fact the track doesn’t sound American in the slightest, beyond, perhaps, the wide-skied expanse of the production. What it is, however, is an extremely accomplished bit of dusky, down-tempo electro-pop. I’ve always preferred Canada anyway. KWC

‘Voodoo Ritual’ is about as good as psych rock revivalism could be in 2015 I guess. Actually, no it’s not, because we had a new Goat album last year. Not bad per se, but The Presolar Sands are filling a gap which doesn’t really exist at the moment – for me at least. NB

Synth-tastic electro-pop songs like this were ten-a-penny ten years ago, but nine of them would inevitably be shit – hence why only a few bands from that era are still around today. On this evidence, Berlin’s Say Yes Dog have the pedigree to run with the best of the survivors, with ‘Girlfriend’ employing the same pasty-faced funk of Hot Chip, but with Metronomy’s cheap-sounding keyboards and ear for a melody. These guys can stick around. KWC

If anyone could sum up the national sigh of social and cultural inertia which summed up the UK’s election result last week then it was always going to be Sleaford Mods. Their deceptively simple beats and suitably angry and small-town-England-referencing lyrics pick up yet more votes here. NB

One last tired election reference and then we can put it to bed and forget it ever happened… I’m not entirely sure what to make of this Kuwaiti surf-rock, beyond the fact that it’s difficult to listen to Sultan’s bouncy delivery without cracking a smile. Likely to go down well with any Gogol Bordello-worshipping festival crowd. KWC 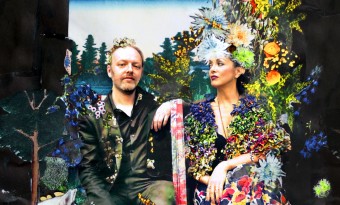