Democracy can be a right bastard sometimes. You go into a little cupboard and vote, vote for what you think is just, what you think is for the good of society. You believe in people and their capacity to choose the right option and ignore the shit ones. Positivity flows through you.

You feel as though humanity as one can move forward onto better times. The time for a liberal, forward-thinking future is now.

Well you do all of that, all of that hoping and putting big nervous crosses in blank boxes just for the opposite to happen, leaving you speechless, bereft and not just a little bit miffed. If you were one of the people left sad-faced last Friday morning then you will know the cruel arse-slap of a majority vote in the opposite direction. It feels fucking rank.

Well if Thursday night’s election was a sad reminder that sometimes the public can’t be trusted (they are merely people after all, the tossers) then the previous Wednesday at the Shacklewell Arms proved that just sometimes the people will vote in the appropriate and correct manner. Sometimes.

It might’ve just been at a gig and make no difference to the world at large but hey, small victories.

That gig was RAKETKANON. Raketkanon are not your usual noise-rock band, I can tell you. Formed in Ghent in 2011, the Belgian four-piece play squelchy synth-led metal-leaning jackhammers and are here in London, like a sweaty political leader trying to drum up last minute votes, to promote their recently released second album RKTKN#2, recorded over five days with the legendary Steve Albini. That Mr. Albini was involved in recording their album should give you a slight hint of what Raketkanon are all about.

I was anticipating a night of noisy sods and I’m not disappointed. From the off they play with a manic energy and are a bloody fierce force to be reckoned with. Darting about the stage, each member jostles for the audience’s attention in different and intriguing ways. It’s like the leaders debate all over again, except less posh.

This is a band of great showmen (unlike the leaders debate). Drummer Pieter de Wilde spends more time offstage than the audience, often launching forward to join the pogoing crowd or, at one point, to go to the bar and get a drink. Class.

Singer Pieter-Paul Devos jolts and spasms like someone’s clamped car batteries to his tender, unfettered knackers. The band bypass conventional lyrics, using a made-up, mangled language as their form of oral communication. Nonsensical gibberish falls from Devos’ mouth as though he’s possessed by some weird illiterate demon. Most politicians talk a similar style of nonsensical bollocks but in a much less (much, much, much less) pleasing manner.

The crowd goes mental for single ‘Florent’, its stompy glam synths giving way to a crashing noise breakdown. Synth chap Lode Vlaeminck pounds away throughout, trying to fight off the guitar onslaught. Check out its creepily cheerful video inspired by all of your favourite cheesy ’70s stars like Showaddywaddy and Cliff:

Anna has to be re-started as a member of the audience talks over Devos’ eerie harmonic opening. The band deal with this sort of thing with good-natured humour, and pepper the gig with jokey interactions. Again, check out their video for ‘Anna’, which is a brilliant shot-for-shot remake of ’80s spandex goons Guns N Roses’ rock melodrama ‘November Rain’:

There’s a bit of fun when the band point out that their name has been misspelt on the nearby blackboard. Raketkanon may have made up their own language but they draw a line at the misspelling of their name. (It is wildly misspelt to be fair.)

Generally speaking the songs from RKTKN#2 feel a lot more alive, more spontaneous when played to an audience than they do on record, where the controlled, restrained menace doesn’t quite live up to the entertainment-filled whirlwind that is their live gig. You get the sense that the band are at their best when performing in front of people and feeding off of their energy.

Devos strangles and manipulates his nasal vocals through a desk-full of pedals, and during the daunting ‘Nico’ it really adds to the manic effect, making the song come alive much more than the recorded version. On stage it sounds savage, on record slightly reserved.

At the end of the gig guitarist Jef Verbeeck asks the audience if they’d like to have a vote, good and democratically like: “Do you want two fantastic songs or three crap ones?”

The audience, quite wisely, choose the two fantastic ones. Positive democracy in motion. Voting for the shit three would be like voting for UKIP just because you have nothing else to do and think Farage is ‘a bit funny on the telly’. Some people just want to watch the world burn.

At the end Verbeeck asks the audience over to the merch stand – “If you would be so kind, you can come over and lick our ears. And we can talk!?” It’s a tempting proposition and one which very nearly gets my vote. If only Miliband had made those kind of offers.

Goes to show that most of the time democracy does work and that people aren’t all tossers. Well, not all of the time anyway. 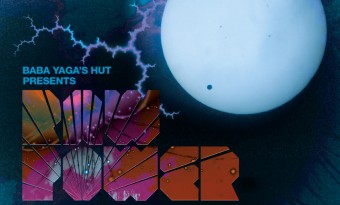 The glorious psychedelic noise feast that is Raw Power returns to London this month, and we've helpfully portioned out some recommendations for anyone bewildered by the treats on offer...
Read More