Entering The 100 Club is like entering a time warp. After walking through a clinically lit corridor next to an Ann Summers on Oxford Street, you descend into a low-lit hubbub that doesn’t seem to have changed much since it first opened as a jazz club in the forties. From the framed pictures and ephemera on the walls to the tables and chairs stacked up at the sides, it’s grimy, scuffed-up, and, in an area of central London being systematically stripped of its music venues and character, extremely refreshing.

It’s also a very fitting setting for a night of music that also seems resolutely retro, kicking off with space rock three-piece V E N N. They’re a band with a particularly hard-to-google name, although searching for their Soundcloud did indirectly remind me that Venn That Tune exists, so it wasn’t a totally wasted endeavour.

Neither was their set. You always have to admire a band with the balls to kick off with a lengthy synth drone, and their’s swells nicely until the band’s singing drummer finally punctures it with a sharp motorik beat. V E N N’s likely influences quickly become clear – Silver Apples, Hawkwind, Neu! – but they don’t draw from them in as po-faced a manner as other bands with similar record collections (see: The Horrors), but let the music breathe and grow over extended instrumentals, punctuated by the drummer’s (not always entirely necessary) vocal yelps and melodies.

The guitarist switches to bass without me noticing. The band may even switch to a new song without me noticing. I’m pretty sure they only played three numbers, but the similar tempos and rhythms meant they could have each been singular movements of one whole. It’s like watching a psychedelic fawn taking its first steps – magical, but always feeling like it’s on the verge of collapse. If I were to create a venn diagram for V E N N, Leeds five-piece Vessels would be in one of the circles, and the recently reformed Loop in the other. Which is not a bad place to be.

Coincidentally, I bought a Loop LP off eBay in the interim between the bands, and had the distinct suspicion that I could be bidding against other people in the crowd. Then again, the crowd didn’t contain any of the regular heads you tend to spot at psychedelic guitar gigs in London. For a start, most of them were tiny. You don’t get teenagers taking selfies in the front row of a Dead Skeletons gig, that’s for sure.

This makes more sense when Jacco Gardner and chums hit the stage looking, if anything, even younger. Having first been turned on to Gardner’s music by 27-year-old multi-instrumentalist whizz Frank Maston, I’d expected Gardner to be the same age. In fact he’s actually a year older, but neither he nor his band look a day over twenty.

This suggests somewhat cleaner collective living than your average rock band, which is perhaps reflected a little in the music. Jacco Gardner may be heavily influenced by one of rock ‘n’ rolls druggiest eras, but his music suggests he’s studied the likes of Syd Barrett, Arthur Lee and The Beatles with a pen and a copybook in hand (rather than a spliff and an ashtray like most). It’s composed with the confidence of someone who really knows what they’re doing, the latest in a long lineage of the Nederbeat tradition.

This is borne out in the performance. I haven’t seen a tighter, defter, better drilled band in a long time. The vocal harmonies are immaculate, the instrumental breaks finely judged, and the rhythm section is frankly fantastic. The bassist is particularly accomplished, casually rocking back on his heels as he embarks on dextrous runs and phrases that ring out with impressive clarity. (It might have helped that we were standing right next to his bass amp.)

Perhaps it’s this sort of calculated artistry that often makes Jacco Gardner recall the likes of Dungen, The Coral and Tame Impala rather than the original sixties acts that inspired them all. Nary a foot is put wrong all night, from the instant hit of his 2012 debut ‘Clear The Air’ early in the set to the equally enjoyable penultimate number ‘Find Yourself’, with the occasional spooky organ line or mild crescendo the only deviations from an otherwise gently-executed psych-pop package. In fact, the only gripe in an otherwise faultless performance is that Gardner’s voice doesn’t always come through very clearly or distinctively.

The other minor gripe, and it’s probably slightly unfair given the paisley-patterned pastel prettiness that Gardner trades in, is that sometimes it all seems a little too pleasant. This is perhaps summed up in the singer’s self-effacing niceties in between songs, while the lively but dingy environment may also have played a part; Gardner’s polite stage presence is in contrast to those who gobbed from it during the venue’s legendary punk period. That said, the exact same set would doubtless sound absolutely perfect in a bucolic festival environment.

Things speed up nicely towards the end, with some fun fills from the drummer adding a surge of energy to the performance. The more muscular last few tracks have the teens at the front swaying, as my partner put it, “like sea cucumbers.” A fittingly psychedelic impression, and an auspicious sign for the release of Gardner’s second album Hypnophobia next week.

The title of this review suggests a competition between both bands. Certainly both have approaches that put them in opposition to each other, with V E N N’s free-flowing, mercurial workouts somewhat at odds with Jacco Gardner’s colourful, manicured, three-minute nuggets. So who won? It was too close to call, but with both bands on the same bill, no one could lose. 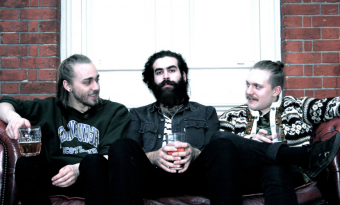 It was a gig of two enjoyable but mismatched halves in Hoxton last Friday, as rock trio Bella Figura were bizarrely billed with electronic maestro Throwing Snow...
Read More