Monitors editor Kier Wiater Carnihan takes over the single column this week, and prepares to fill his lungs with ‘American Oxygen’…

Thrill Jockey are banging out records like nobody’s business at the moment, with new albums by the likes of Liturgy, Lightning Bolt, Steve Gunn, Colleen and Eternal Tapestry all hitting the shelves in recent months. However, the debut album by Dommengang, a trio led by Scout Niblett / Holy Sons collaborator Sig Wilson, might just prove to be the best of the bunch judging by title track ‘Everybody’s Boogie’.

Bookended by long sections of gloriously tremoloed guitar, the meat of the song is the sort of heavy psych freakout that labelmates White Hills specialise in. It might not actually be everybody’s cup of boogie, but it’s good enough for me.

The synth sound in this just kills me. It’s so rubbery, so tickly, so flexible, so outrageously fantastic that I know I’m guaranteed to enjoy the rest of the song whatever happens. Seriously, that synth could withstand the audio equivalent of spilling a sack of anthrax spores into the air conditioning, namely a guest appearance by Brandon Flowers.

Fortunately Flowers doesn’t appear, and the fact that Lorely ‘Empress Of’ Rodriguez’s song is also an enjoyably up-tempo pop banger is the icing, rather than the ricin, on the cake. Apparently she’s supporting Jon Hopkins on some upcoming dates, and the highest compliment you could pay is that her production won’t sound at all shabby next to his.

ESKA’s an artist who’s threatened to blow up for a while now, although ‘Shades Of Blue’ probably isn’t the track that’s going to light the ignition, mainly because it’s too damn weird. While the intro combines the feel of The Isley Brothers’ ‘Summer Breeze’ with the twang of ‘I Was Made to Love Her’ by Stevie Wonder, in terms of unconventional soul music this is more equivalent to Wonder in his Innervisions phase.

The time signature is so odd I can’t even work out quite what it is, with nine beats following six beats and still managing to sound totally natural. The rhythm snaps, the vocals soar, and the whole package might just be the most accessible progressive soul song since Outkast’s ‘Hey Ya’. Hopefully it ends up as successful.

(Post-script: ESKA also just-this-minute shared another track from her upcoming, eponymous debut album here. Sadly it’s not nearly as good as ‘Shades Of Blue’, but then what is?)

If Grimes isn’t going to pull her finger out and actually bother releasing a follow-up to 2012’s Visions then we might as well get someone else in to finish the job. GRRL PAL are clearly jostling for the position, although ‘Radar’ might be a little too close to ‘Genesis’ for comfort, ripping off the latter’s simple beat and airy, candy floss vocals pretty much wholesale. Luckily the chorus is just about different (and catchy) enough to avoid a lawsuit.

The now defunct Das Racist were one of the most infuriatingly inconsistent acts in the game, capable of producing pure gold (‘Rainbow In The Dark’) and pure shite (‘One Dollar Can’) in equal measures. Co-founder Heems’s debut solo album Eat Pray Thug is similarly mercurial, but lead single ‘Sometimes’ is definitely near the top of the scale.

While it actually came out in January (ahem), I’m including it here for two reasons; 1) it now has a new video featuring a typically irreverent take on skin colour; and 2) it still makes me giggle. Not least the line: “Sometimes I write hard / Sometimes I’m mad lazy / I just repeat words like ‘clarity’ / Fucking crazy.” Which comes after he’s just repeated the word ‘clarity’ about eighty times. Never change Heems.

Ploughing that same wobbly-psych field as the likes of Maston, Jacco Gardner and Alex Calder, Jackson Scott’s ‘Ripe For Love’ distinguishes itself with a marvellously twisting chord sequence, regular time changes and the sort of quality layering you’d normally find in an expertly baked rainbow cake. While the outro is perhaps a little drawn out, the only real concern is whether he’s left enough ideas for the rest of his forthcoming Sunshine Redux album…

The oh-so-cute intro to ‘Read My Mind’ initially brought to mind The Boy Least Likely To (aka The Boy Least Likely To Write A Song That Doesn’t Irritate Me). Fortunately a woozy synth line immediately adds some intrigue, and by the time the downbeat chorus arrives I’m a willing passenger in J Fernandez’s ramshackle vehicle. There’s a touch of Daniel Rossen’s knack for combining a strong melody with pleasantly harmonising instrumental accompaniment, and the phrasing is nicely judged too. An intriguing taster for June’s Many Levels of Laughter album.

Another track that sounds like it’s going to be annoyingly chirpy at first. However, The Lagoonas’ method of improving an unpromising beginning by taking things up several notches results in a thrashy but tuneful garage-pop wriggler, turning the riff into something altogether more palatable. Probably the least original track on the list this week, but definitely not the least fun.

However, while that’s obviously still the first word to come out of his mouth on ‘Fester Skank’, Dutch producer Diztortion’s addictive dancehall beat soon has you forgetting about hashtags and Russian Premier League footballers. It’s one of those tunes that, the moment you hear it, has you wondering exactly when the best place to drop it during a party DJ set would be, and while his lyrics are still pretty ropey, as grime comebacks go it’s a whole heap more tolerable than the new Kano track.

There’s a rich lineage of backing singers who’ve turned into stars in their own right, from Whitney Houston to Mary J. Blige. Having previously vocally bolstered tracks by the likes of Plan B and Rosie Lowe, London’s Obenewa looks to be in good position to follow that trend. ‘He’ is as deliciously sultry a RnB number as you’re likely to hear all year, sonically sculpted by Raffertie & Walter Ego and drizzled with Obenewa’s rich vocals. Plus, at 2.43 long it makes sure not to outstay its welcome. Smooth.

Despite some of the tripe she’s released (‘We Found Love’ anyone?), Rihanna’s long been one of those pop stars it’s somehow considered cool to be a fan of. People who I’ve literally never heard listen to a pop song in their life have expressed love for Ri-Ri, to my continual confusion and consternation. If ‘American Oxygen’ had been one of her early singles, however, the love may have made more sense to me. Not that it’s a particularly spectacular track, although the tribal percussion and subdued tone make it much more appealing to these ears, but because it comes complete with a ‘political’ video that has the newspaper critics creaming their jeans.

Images of everything from 9/11 to the KKK are collaged together between shots of Rihanna standing in front of a dimly lit American flag (wearing rather more clothes than in her usual videos). However, the footage used is so random, and the lyrics so vague, that it’s impossible to decipher what it all means beyond a desperate scream that THIS/I AM IMPORTANT. One of the (many) co-writers, Sam Harris, has earmarked Bruce Springsteen’s ‘Born In The USA’ as an influence, what with its patriotic surface masking critical comment, and you can also definitely hear the presence of Kanye West (a master of the grand, if often hollow, gesture) in the piano phrases and production.

The overall effect is to create the first Rihanna track that I’ve actually kind of liked. Which means everyone’s probably now going to start hating her. Oh well…

The fact Vevo tagged the above video as “Punk-Rock at its very best!” immediately sets me against the new single from Slaves, but to be honest the real problem with ‘Cheer Up London’ is encapsulated perfectly in the following tweet:

Aaaah, that’s better. This may sound like you first heard it over a decade ago, probably in the ‘chill-out room’ of a squat rave somewhere near Liverpool Street, but sometimes comforting arpeggios and repetitive percussion are all you really need.

U.S. Girls is one of those names I’ve read but never heard. Or perhaps I’ve mistaken the name for one of the million other acts with girl-related monikers at the moment (there are two in this bloody column alone for Christ’s sake).

Either way, judging by all the negative comments underneath the YouTube video (“outlandish crap” is one particularly stinging barb), I’m probably as out of step here as with Rihanna, as I rather like this lackadaisically bouncy serving of psych-lite electro-pop. It’s got that same tropical lilt as Rainbow Arabia, and while Meg Remy’s vocals could do with shifting from a single note more often, the track does enough to warrant paying more attention to her name in future. 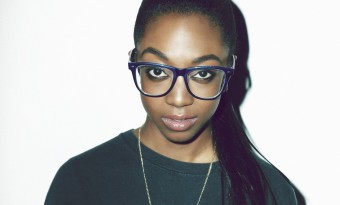