An upbeat dance album on the ever-excellent Ninja Tune label, Romare’s latest release is full of joyful swing references and thumping drums that translate excellently into his live shows. He’s clearly a talented electronic artist and Projections is a great album, but for me this is all heavily tainted by his clumsy attempt to shoehorn in references to black history.

There’s no doubt that Romare, aka Archie Fairhurst, desires at least some significance to be attached to his work. He named himself after the artist Romare Bearden, and his album after an exhibition of Bearden’s – and much like the artist’s collages inspired by African-Americans, Romare uses samples to form his own original expression of African-American culture. Having studied African American Visual Culture at university, Romare explains his aim: to create “a sort of musical essay where the samples would act like footnotes and convey a particular theme to the listener.”

In a way it’s unfortunate for Romare that his album came out just a month before Kendrick Lamar’s, because while the music is a good listen and super fun to dance to, his homage to African-American culture comes across as all the more heavy-handed and flippant. Blatant tributes come in the form of tracks named after legendary stars (‘Nina’s Charm’, ‘Ray’s Foot’, ‘Jimmy’s Lament’) and lack the intricacy and depth of, say, Kendrick’s ‘King Kunta’. Instead you’re bashed about the head with references, not allowing you to glean the allusion to black musical heritage through his subtle and seamless samples. And actually you probably wouldn’t, had the songs been otherwise titled: the album could easily be a good dance album lightly touched by African-American musical influences, which goes some way towards explaining why Romare is so overly liberal with the seasoning.

This in itself wouldn’t be too bad, but for someone who’s studied African-American culture, Romare’s handling of these influences verges on almost offensive thoughtlessness at times. Bessie Griffin’s slow, sad rendition of ‘Motherless Child’, a spiritual melody created by enslaved Africans, perfectly encapsulates a melancholy feeling of rootlessness as she croons, “Sometimes I feel like a motherless child / A long way from home.” Romare’s appropriation of this track loses the depth, retains barely any of the melancholy and then replaces these elements with a glib electronic beat. It’s not horrible in the way Alexandra Burke’s dull-as-fuck rendition of ‘Hallelujah’ was horrible (that is, unlistenable): the vocals are the most soulful that Romare’s voice can get, and even heartfelt, but the electronic wrapper creates distance and hugely diminishes the emotive quality, to create a catchy tune that ultimately trivialises its source material. When you pick up a song like ‘Motherless Child’, you also pick up its legacy, and a responsibility to do that dark legacy justice.

Similarly ‘Roots’, an 8 minute long track, opens with a famous line from a speech delivered by Malcolm X: “Because you can’t hate the roots of a tree without hating the tree.” This is from a speech delivered in Detroit hours after Malcolm X’s house was firebombed; he and his family just managed to get out alive, and he stood delivering his speech in the only clothes he managed to grab, still smelling of the smoke of the fire. This was a powerful speech delivered amid the controversy of almost everything Malcolm X espoused, and to lift that single quote and arbitrarily place it in a dance context – I can honestly say I don’t know what to make of that. I want to tell myself not to be so uptight, but the feeling of discomfort is hard to shake – the melody slips into such a lighthearted tone, a kind of wavey-arm funtime dance vibe, that it makes me think, is this appropriate when referencing the complex, controversial legacy of someone like Malcolm X? But who knows, maybe I just hate fun. (I love fun.)

Again, there’s nothing blues-related to ‘Prison Blues’, and I struggle to understand why Romare would choose that name only to create such an empty track that has nothing to do with prison or the blues.

The production and execution of Projections is full of precision and skill – even listening through crappy headphones the sound is full of clarity and the bass is perfect, with pleasant melodies dusted over the top like delicious powdered icing. It’s a great effect that clearly takes skill to pull off. If Archie Fairhurst could have offered the same skilful touch in his integration of African-American music and history in this album it would have been truly excellent.

As it is, Romare’s Projections is at best a great dance album that draws on black cultural history to feed into its rhythm, the perfect material for a solid bass system and ideal for live performances. At worst it’s a vapid attempt to appropriate a troubled and extensive aspect of African history, bordering on offensive in its empty, joyous approach to truly tragic material. This is an album that I really like listening to – it’s good for just ambling around, running and especially dancing – it really is a great bunch of songs. It just shouldn’t try to make itself more than that.

Kendrick Lamar - To Pimp A Butterfly 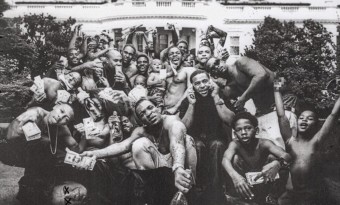 Amris Kaur dissects Kendrick Lamar's sprawling and enthralling 'To Pimp A Butterfly', an album that makes no attempt to simplify its complex and conflicted observations on race and colonialism...
Read More