There is something about Radiohead that makes me want to shout “STOP WHINING”, as they manage to indulge in the broken electronica of Aphex Twin or the jazz-happy fusion of Flying Lotus and suck all the fun from them. It seems Apidae are similarly keen to go all falsetto over subdued breaks and harmonising timpani synths. ‘Turning Tides’ sounds a lot like a lot of other stuff, so whether you like the other stuff is really key to whether this will be at all interesting.

Best Friends have been one of our favourite garage rawk bands over the past couple of years, their sheer energy invigorating a genre which can at times seem to engage in pastiche for no reason other than to be awkwardly cool. Luckily, ‘Fake Spit’ is another one minute fifty of primal fun to add to their set-list – a welcome blast of youthful abandon in a world where ‘guitar music’ repeatedly indicates self-indulgence.

Braids return to the musical fold with a weighty issue-based release, becoming part of a growing community of artists (largely female thus far) who’re dealing quite bluntly with topics of abuse and rape. ‘Miniskirt’ opens with a monologue that, once listened to properly, creates an uneasy atmosphere which the discordant synth and jittering drums underscore, before ending with the phrase, “It’s my little mini skirt / Think you can have it? / It’s mine all mine.” While filing them alongside The Knife and Grimes might seem a little lazy, it’s surely only time before this very modern heritage of sexually political electronica is recognised as the ’10s equivalent to the civil rights soul of the ’60s.

It always seems to be a bit of a hip-hop curse that you might as well not try after your first record, and it’s almost not happened at all for Cannibal Ox. Fourteen years after their debut, following a split with El-P and multiple failed attempts at a follow-up, they’ve finally turned up with a new track (surprisingly, with a man who rarely likes turning up at all, MF DOOM). ‘Iron Rose’ cracks along with hefty poise and finds the duo delivering their lines with enough confidence to make you think that second record may have been worth holding out for.

Carl Barat & The Jackals – A Storm is Coming

It’s telling that the exclusive stream of the album this is taken from is on The Telegraph’s website, a newspaper whose music writer’s idea of doing his job is ignoring an award-winning album just because no one else was writing about it. I’m presuming he didn’t listen to this either, as sub-par Libertines is bad enough when it’s another band doing it, but from one of the band itself? Nahhh.

Here’s a decent sugary sweet pop tune ruined by the charisma vacuum that is Rita Ora. It’s a theory of mine that pop songs have unnecessarily become thirty seconds longer since the dawn of the MP3. Look, ‘Heard It Through The Grapevine’ and ‘Like A Virgin’ don’t breach the three minute thirty mark, and you’re not Mike Oldfield, what’s your excuse?

This is the first release from Bloc’s new record label, which probably means if you buy it on vinyl it’ll turn up having only been half pressed, will disintegrate after the stylus hits the one minute mark, and the store will refuse to reply to your requests for a replacement or refund.

A nice idea for a harmony that goes on well far too long. The two minute mark, where the R&B vocals make way for a weird electro interlude, should’ve come a lot earlier. I’m not at all sold on dodgy guitar solos either. Once again, an example of a band who could do with a producer to reign things in a bit.

The latest release from the Japanese label _flau is an industrial tribal number that sounds like it’s been recorded in an aircraft hanger to soundtrack the scariest film you’ve never seen yet. Using percussive elements in a similar vein to last years Clap! Clap! record, ‘?????’ leaves you asking as many questions as the title suggests, but you know you want to hear this on the biggest sound system possible.

The latest release on Thee Oh Sees’ Castle Face Records does exactly what you’d expect San Francisco garage punk to do. The Ty Segall-esque vocal intonation sits alongside an interlude which gives krautrock a wink. It doesn’t really go anywhere but it sounds like they’re already at the party anyway.

While production subtleties are all well and good, there is a bite missing from ‘Infrared’ which keeps you from being engaged for the full span of the track. Dam Dew’s vocals are androgynous to the point where it doesn’t actually matter who’s singing , and the whole soundscape is moulded into a mid-tempo groove. It’ll sound nice when the sun’s shining but loses its attractiveness in the cold light of a cold day.

I think there’s a track here that in a different context might make me do something mad, like shake my head vigorously at a festival. But alas, it all sounds like it’s happening five miles away!

Single-Minded: Peculate gives Swift the slip with 'This Sick Beat™' 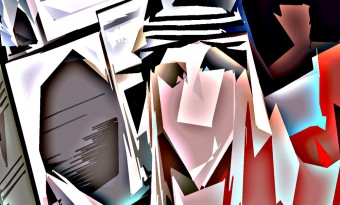