It’s crap being an adult. In the last 24 hours I’ve been forced to walk for over an hour to work due to a bus strike, had to have drawn out conversations with my housing association over possible damp in my flat (which took so long I had to work late to compensate), forgot to eat dinner and so subsided on a frozen pizza at 10pm, then stayed up till 3am painting doorways and skirting boards because there was no other time to do it.

Apart from accidentally getting high from the the potent fumes of Dulux’s brilliant white gloss, none of this has been enjoyable. In contrast, when I was a kid I lived fifteen minutes from school, was out again by 3.30pm without fail, had all my meal and moisture problems dealt with by bigger people, and the only painting I ever did was with my fingers. Life was sweet.

Belgium’s Showstar understand this. Since forming in the sleepy town of Huy, they’ve spent the best part of a decade thrashing out their noisy rock goodness, and while new single ‘Adults’ sounds perfectly fresh, the lyrics and video suggest that adulthood is taking its toll.

“Work work work until you die,” is the catchy chorus refrain – like a more melodic version of The Blue Orchids’ ‘Work’ as performed by early Bloc Party – and indeed that seems to be what’s happening in the vid. From commuters to lumberjacks, our wage-enslaved heroes are seen, quite literally, trapped on the carousel of capitalism, desperately reaching for a handful of hard cash until they croak. Luckily the perkiness of the guitars should prevent you from joining them.

The track comes from Showstar’s eponymous forthcoming album, recorded by Rory Attwell at Lightship 95, which can be pre-ordered via Bandcamp. If you’re looking for something to spend your hard-earned pennies on after another grinding week, it could be a wise choice. 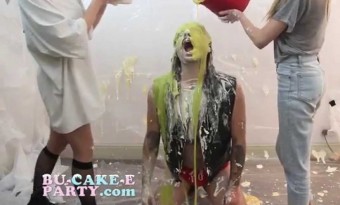 As male depression continues to soar, the likes of La Shark seem to not only be developing a remedy, but hopefully starting a trend of bands focusing on something other than themselves...
Read More