The Association of Independent Music (AIM) recently hosted a panel with the heads of music from BBC Radio, so that members of AIM could gain a deeper understanding of how the BBC operates internally. AIM is a trade body much like the Entertainment Retail Association (ERA) – joining is voluntary, and they seek to represent the concerns, and celebrate the successes of the British independent record business through their various networking events, awards ceremonies and campaigning. Their members range from the likes of Beggars Group to Dave from down the road. The BBC is the, er, BBC, and BBC Radio is under constant scrutiny from indie labels, not least because Radio 1 seems intent on not playing their music.

The panel was made up of Radio 1 / 1Xtra chief George Ergatoudis, Jeff Smith (Radio 2 / 6Music) and Jason Carter, who looks after BBC Live Events and BBC Introducing. A colleague of ours went to the event (representing the management company he runs) and took some notes for us. As we’ve dedicated a few column inches on how we think BBC Radio could improve, from its racial divisions to why age-based demographics don’t make sense, this was an opportunity to have some long-standing questions answered. So, based on the notes supplied from the chat, here’s what we learnt…

First up: It’s the BBC Trust that makes up the rules about age. For those to change, the public or the industry would have to petition the Trust to change their policy. In case you were wondering, the Trust is the independent body which sets the rules which the BBC have to follow in their charter. Here’s a list of the trustees and here’s how they’re appointed.

On the issue of genre-specific stations or daytime shows, they said they try not to be genre specific; it’s apparently less about genre specific shows and more about curators such as John Peel, someone with diverse and authentic taste to introduce people to new sounds. And that would work, if I believed that either Grimmy or Fearne Cotton were even close to being as obsessed with listening to and collecting records as John Peel was. None of the Radio 1 daytime DJs have ‘spot plays’ (where they can put in anything they want); they can put music in for consideration at playlist meetings, but it’s only the producers who are actually in those meetings. Lauren Laverne has eight choices a show, while Lamacq has ten [can Steve donate some of his to Lauren, please? Cheers – Ed.] Maybe that’s conducive to the fact that 70% of tracks played on 6 Music are from independent labels (Radio 2 still manages 30%).

Unsurprisingly, Radio 1 confirmed that it looks for tracks with wide appeal: ‘Stories’ from specialist shows put forward to playlists (what these ‘stories’ are, apart from strange A&R jargon, is anyone’s guess). Shazam and iTunes stats are looked at, which is weird, because Shazam is what labels look at as well.

They did claim that anyone can use the uploader to put tracks forward for plays – essentially starting at local radio and then building up towards spot plays on 6Music and up to Radio 1. To paraphrase one of the panellists: “[It] can be as quick as 24 hours for someone like Zane to play – or may never happen, but does work.” I’m a little sceptical about that but I’m willing to be shown an example. They also said that they only use research on the artist’s stats after they are committed to playing a track – no one in the room was too convinced about that.

The panel also denied that pluggers (the people who submit tunes to radio producers) make that much difference. Most bands who’ve experienced life both with and without a plugger probably wouldn’t agree with that. It’s not a problem per se, but it’s weird pretending it’s not a factor.

One ballsy remark to a room full of AIM members was that the reason only 9% of the most played tracks on Radio 1 aren’t from majors is because majors are signing up all the talent. They reckon they spot the talent and the artists and managers choose to go to majors. Quite a statement, and pretty much just not true. Take a look at the ‘Best Of 2014’ lists from the likes of The Quietus, Crack, FACT, even us, and tell us how much of the music, from all those distinct countdowns, was released on a major.

They did make the point that when acts get on majors even after 3-4 albums on an indie they get played on Radio 1 – think along the lines of Biffy Clyro. They say that’s because the band are on a journey and, as they get more mainstream, bigger producers come on to widen their sound. This calls bullshit on their claim that indies aren’t signing talent, and also betrays how Radio 1 basically expects artists to bend to their standards, and not the other way round.

We can end on a high note though. An ‘A playlist’ track on Radio 1 gets 25 plays throughout the daytime in a 5-day working week. Compare this to the likes of Capital, where you’re more likely to get 70 to 90, and you’ve already got a much more varied output than the commercial sector provides.

It increasingly looks like R1 is the ‘major label station’, and 6M is the ‘indie one’. At the end of the day you don’t have to listen to Radio 1, and access to internet streaming and DAB radio is common enough now that listeners flocking to other stations, whether that be BBC, local or commercial, is set to remain a trend. The feeling is that Radio 1 helps make hits, due to its sheer cultural weight – its presenters are everywhere, its listenership is still big. But if the BBC Trust is obsessed with getting R1 to focus on battling with its commercial competitors, maybe the best way forward would be to ignore it, focus on stations that do support a wider range of artists, and spread the word about them instead.

A Deafening Murmur - the sound of the South West 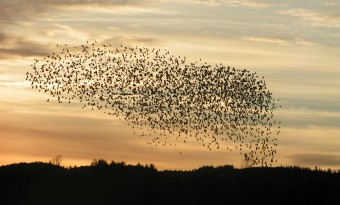 We take a look at the dark and destructive sounds emerging out of South West England, including Spectres, Hey Colossus, The Naturals, Henry Blacker and October Drift...
Read More