Everyone’s favourite psychedelic twosome* are back! And they’ve brought along a bloke with a really great moustache! That alone is cause for furious celebration, but the fact that Moon Duo’s hirsute friend has upped the band’s facial hair status from ‘righteous’ to ‘outrageous’ isn’t the only reason to hang out the bunting. No, that guy with the fly handlebar happens to be skateboarding legend Richie Jackson, and the improvisatory skills he brings to the table make ‘Animal’ the first truly great music video of the year.

Jackson, resplendent in pinstriped trousers and groovy open-necked shirt, is simply strutting down the street (although strutting doesn’t quite do it justice – his ridiculous gait is somewhere in between John Travolta and the Madness walk from ‘One Step Beyond’). Sadly a sign declaring ‘NO SKATEBOARDING’ seems sure to spoil his fun, but the innovative Jackson has other ideas. He proceeds to skate his way through town using pretty much anything that isn’t a skateboard, from a pitchfork to a computer keyboard. It needs to be seen to be believed. And laughed at.

Moon Duo’s Ripley Johnson, himself blessed with a truly mighty facial thatch, explains how the video came about: “We loved Richie Jackson’s skate videos, the idea of a psychedelic skater, something outside of the norm. We contacted him and he had the idea of doing the world’s first skate video without a skateboard, and we were sold right there.” The fact it also feels like an Oor Wullie comic strip if drawn by Gilbert Shelton is apparently just a happy coincidence.

The track itself is a little more aggressively up-tempo than Moon Duo’s usual fare, but retains that addictive mix of spine-creeping keys and stomach-punching riffs that makes them such a powerfully agreeable force. A new album, Shadow of the Sun, is coming out on Sacred Bones in March, and if this is anything to go to then it should be an absolute beast. And if not, well, you can do like Richie Jackson and make a rudimentary skateboard out of it… 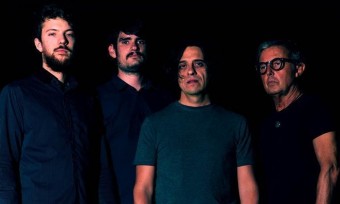 A 1967 documentary about Pentecostal parishioners being bitten by snakes forms the basis of the latest video from Italian psych-occultists Mamuthones...
Read More