Before we begin, can I ask why every ‘single’ has to be over three minutes thirty now? Just because a five minute MP3 doesn’t take up much more space than a two minute one, doesn’t mean you have to make every song as long as possible. Not every track deserves a breakdown, intro, outro AND middle eight. If I ran a label, I’d restrict everyone to the 7″ format and get them writing singles which actually sound like singles, and let them expand once they’ve proved their worth a little bit. There isn’t a problem with longer songs per se, but when a song isn’t saying very much already the problem is accentuated when they’re taking up five minutes of your time…

“All I do is eat oysters and speak six languages in three voices” is peak Bronson. Weird, maybe true, and full of bravado. ‘Actin’ Crazy’, the lead single from his upcoming album, has a bouncy beat from Drake collaborator 40 which slides around the New Yorker’s upfront vocals and keeps horns squeaking in the background. It begs for repetitive listens and for the first time I’m excited, not just inquisitive, about the LP…

BC Camplight – You Should’ve Gone To School

I thought I’d accidentally put the new Django Django tune on first listen – all wavey sunshine aesthetic, vintage synth gargles and chorus-heavy guitars. The vocals eventually take the track away from the sweet and sugary start, Camplight’s falsetto reciting a tale of long distances the protagonist can’t be bothered to travel. A nice and lush, if slightly passable, tune.

Indiana – Only The Lonely

It might be time to start admitting that Indiana could possibly be a one hit wonder. ‘Solo Dancing’ was a thumping, innuendo laden tune, so good that in its shadow ‘Only The Lonely’ comes across more like a Ellie Goulding album track. And that’s just not really good enough.

Ah, here’s the Django Django single, kicking in a little harder than they used to although still melding mid-’70s prog rock with wobbly techno. ‘First Light’ is a good example of quirky British pop, featuring nice harmonies and percussion which’ll see plenty of gig crowds do that ‘finger in the air’ dance everyone enjoys while singing along to “lay down in the sun and get something for nothing.”

Jessie Ware: You & I (Forever)

I’m not as down on Ms. Ware as some others; there’s a sincerity to the songs I quite like, even if the tunes can be a little lacking. Here she croons about life-long love and friendship over soothing beats, which works as a sort of palate cleanser. Still, could’ve ended a minute earlier than it did.

Full of Dylan-esque romantic allegories (“Come over and melt me like an ice cream cone in the street in the sun”), ‘Melt Me’ is a pretty fun, self-aware cock rock number, all stomping beat and a guitar riff that sounds like it’s been directly lifted off of any ’70s hard rock record.

Plenty of people may have tagged Favourite Worst Nightmare era Arctic Monkeys to this latest Slaves record, but the vocals, all Essex spitfire bravado, strike a little more like a political Ian Dury. The dark humour goes a little way towards lightening up the hair rock feel to ‘The Hunter’. The middle eight of “it’s reckless, it’s useless but it’s also very fun” is pretty catchy and, importantly, it clocks in at a swift three minutes, keeping a firm grip of its narrative.

A walk in the woods turns strange for this Yorkshire lot in the clip for ‘New Sense’. The hardcore-indebted three-piece clamour through the woods while scratchy post-punk guitars zig zag around the high-tempo drums. Meanwhile the group collect religious imagery before burning a copy of Guy Debord’s Society of the Spectacle, from whose ashes the Virgin Mary is reborn (well, these three obviously didn’t manage that by themselves). Is it an allegory on the similarities between marketing images and religious iconography which Debord wrote about, blasphemy to all invoked parties, or just a load of New Sense? 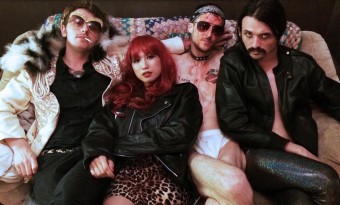 Our first singles round-up of 2015 sees rising London 4-piece Prom give us something to Celebrate, while XL hype-magnet Låpsley finds herself Falling Short...
Read More