Our first singles round-up of 2015 sees rising London 4-piece Prom give us something to Celebrate, while XL hype-magnet Låpsley finds herself Falling Short…

The Quentin Tarantino aesthetic of Prom’s latest press shot is one of the few occasions where it helps sum up the music too – part glamour, part Hollywood grit, part showmanship. ‘Celebrate’ is a bombastic rock’n’roller that wouldn’t seem too out of place in something like Natural Born Killers. At a swift three minutes it’s a nice little kick start into the new year.

Mallory Knox – When Are We Waking Up?

You know you’re in dangerous territory when the word “woah” is written into your lyric sheet. Mallory Knox is what the boss of Radio 1 meant when he said “guitar music was back” – big, boring, over-styled Americana. You can almost hear the video director shouting “jacket collars up, boys!” throughout the amazingly unmoving bombast of the finale. Bless the sincerity, but the lyrics are GCSE standard. ‘When Are We Waking Up?’ is the sort of song which makes you go, yeah, when is everyone going to wake up and add some credible grit back to guitar music on the radio playlists?

James Blake with a higher pitched voice. That is literally it. Not too sure why every blog and their mum seems to be acting as if they haven’t heard a woman croon before. Ever since the final Gil Scott-Heron record (which was by far the best example of this digital minimalism, largely because there was some actual, meaningful context from the performer) XL have been intent on tuning everything to the same, dulcet (read: dull) tone.

I am ashamed to say The Pop Group (est. 1977) are a band whose back catalogue has passed me by somewhat – I’ll be fixing that at the soonest possible point. ‘Mad Truth’, in isolation, is a tropical blast reminiscent of Talking Heads and ‘Let’s Dance’-era Bowie; you can almost hear Foals writing notes on how to do that twiddly percussive thing properly. It’s also a reminder that modern British pop music has lost something of a quirk…

What keeps ‘Dust To Dust’ from being instantaneous is what makes it more interesting – a strange, disjointed but enjoyable structure leads the listener from a bright-eyed and almost fairy tale take on the inevitable. Modern comparisons would call for the the darker, more gritty side of the folk barometer such as Angel Olsen – it certainly demands to be slotted into a fuller body of work, I’m just not convinced it’s a single.

Sean Grant & The Wolfgang – Freedom of the World

The musical embodiment of a trendy ‘tash barber shop or ale festival weekender at a bar in Hackney. It’s got a sort of faux 1920s chic which sends me running for the hills.

For its first three quarters ‘City Lights’ exists through a gossamer thin rhythm section that makes you think, ‘oh great, another minimal female crooner track’. Luckily the whole things catches you off guard and uses its peaceful setting to burst into a flurry in a Caribou-stylised conclusion. A song that tests your patience, but is uplifting enough to warrant the wait.

Single-Minded - Has Macca still got game? 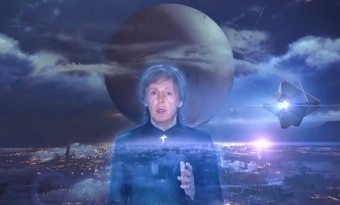 Macca's in a computer game, Redlight's at the dentist, Kissey's in the melting pot and Peter Andre's down the supermarket - it can only be Single-Minded...
Read More