At the risk of stating the bleeding obvious, a lot has changed in the music industry over the last twenty years. The internet has changed every aspect of how we make, distribute and listen to it, with a speed that’s actually almost unnerving when you stop to think about it. YouTube is now, by some distance, the way most people consume music. A decade ago it didn’t even exist. Mental.

So it’s fair to say that approaching this volatile landscape after a twenty year absence must be a bit nerve-racking to say the least. Yet it doesn’t seem to have affected Nathan Pope judging by his comeback EP, Pinto, released under his new nom de plume Antenna Happy. Three tracks of hypnotically arpeggiated techno, it’s the first release on new L.A. label Reinhardt Records, and constitutes a most auspicious debut for the imprint.

We’ve had Pinto on heavy rotation in the office stereo, and decided to satisfy our curiosity about the man behind it by asking him a few questions…

What precipitated your absence from music, and what heralded the return?

I used to DJ in Bristol in the mid-nineties, and I just got stuck in a bit of a rut – the scene I was in was changing in a way that I didn’t particularly like, and I also had dreams of becoming an actor which was always my other love, so I just jacked it in and took another path. I did acting for a few years and I really enjoyed it. Then I somehow fell into software development which I also found pretty stimulating. But, I always had a nagging sensation that I should get back into music. If I was at a festival or a club I would end up feeling frustrated that I wasn’t contributing any more and I would get really fed up about it. The birth of my daughter was the catalyst I needed and I started writing music again.

What’s the biggest difference between releasing music now and back in the ’90s? Do you think things have changed for the better or worse?

Having taken such a long break, it seems like a different world. I don’t think it is necessarily better or worse, just very different. I love the democratic nature of it now, it used to be very hard to get access to the technology but now it is so easy to do – you can knock up some amazing sounds on your phone on the train or bus, transfer them to your DAW and have a fully-fledged idea up on the internet for anyone, anywhere in the world to hear in the space of a few hours. That is amazing. I hear stories of DJ/producers writing tracks on planes and road-testing them in clubs on the same night. How cool is that? I would have given anything to have 24/7 access to that kind of technology when I was in my twenties. I always had to blag studio time, there was no way I could afford one of my own – and that for me is the major difference. The flip side is that there is so much out there it is very hard to stand out, and it seems to move so quickly – there always was an obsession with newness in the scene but with so much getting released it is crazy – you just can’t keep up. And of course the fact that people just don’t really expect to pay for music in the same way, that is a big challenge that is still playing out, and who knows where it will end up. The resurgence of vinyl is great, we may go full circle in some way.

What’s behind the name of the EP?

It is from the Spanish verb ‘pintar’, ‘to paint’. My daughter loves to paint, and I love to watch her when she paints. Her birth was the catalyst for me getting back into music so I wanted her to feature on the release in some way. Close ups of her paintings are used as the release artwork so it all ties in quite nicely.

Pinto has a really lovely, slow build. Do you think fans of electronic music tend to be more receptive to longer tracks? If so, why?

I think more abstract forms of music lend themselves to longer pieces in any case, and techno records have always had a longer natural arc than pop records for instance. Also, they are often heard as a small part of a much longer piece, a DJ set or a continuous live show. I am always conscious of the length thing though because you don’t really want to be self-indulgent. In Pinto’s case I think it works because it is a very gradual reveal, but I generally try and hold back if I can. The key for me is to keep it moving and changing, however long it is. There is a 4-minute edit of Pinto for those who disagree and think it really is too long as it is!

When I first played the EP in the office, someone said it really made them want to eat some ice cream (I have no idea why). What’s the strangest response you’ve had to your music (and/or strangest request while DJing)?

I love the ice cream reaction! My 2-year-old niece said Pinto was “scary and shivery”, which is my favourite review so far. As far as DJ-ing goes, I don’t play out much these days but I recently got told just before I was about to play in a bar that they had a “strictly no electronic music policy”…. it was a pretty short set.

Someone else recognised what your remix of Fleetwood Mac’s ‘The Chain’ was within six bars. You’ve remixed quite a few classics recently, what is it that draws you to do this? Any you want to do next? Is there anything you’d consider too sacred to remix?

I’m not sure if anything is really sacred, but I think some tunes are riskier than others to tinker with. The bigger and better and more loved they are in the first place, the further there is to fall. I’m not a die-hard Fleetwood Mac fan, so that distance helps. Plus there is a genre divide and I think that is also key – you want to bring something new to it. But yeah, The Chain is amazing, a really iconic record that everyone I know grew up with, so I was pretty wary about touching it. But there was something nagging away at me, something in that rolling bassline that I just couldn’t get out of my head with an acid backdrop and in the end I just had to do it. I hesitated for a long time before sending it to Lisa and Alex (who run the Fleetmac Wood project) – but I’m glad I did. The reception has been great and it gave me a lot of confidence to keep at it. I’m working on one by a different artist at the moment which would be regarded as sacred to many people, so we’ll have to see how that one goes down!

Have you been pleased with the reception to the EP? What’s next?

Yeah I’m really pleased, it has been a long time coming and having a positive response to it has really given me a boost. Alex Oxley has done a fantastic job getting it out there, and I’m working really closely with him on a number of projects for next year and beyond. There are 2 new releases and a handful of remixes that will be coming out in the next few months. I’m developing a live show right now, and I’ll start working on an album in the second half of 2015, all being well. Time is the burning issue really, as there’s also family life and the day job that take precedence, but it’s all really positive right now.

The Boy From The Crowd – Vinny Piana Interview 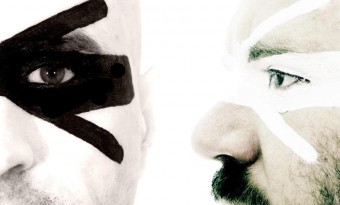 In this age of identikit rock groups full of cloned, skinny-jeaned Simons, blues-infused duo The Boy From The Crowd are crafting a refreshing identity...
Read More