The consumer-baiting video that accompanies ‘Taste It’ seems suspiciously well timed after the recent horror scenes of Black Friday (and ‘Cyber Monday’, which I’m pretty certain has been pulled out of a marketer’s arse). It even features two shrink-wrapped babies, ready to be sent off to the local supermarket freezer aisle – if Banksy had done that you’d be spending millions putting it in your living room. The tune itself is as stylised as the video, minimal but interloping percussive elements holding up Little Boots’ high-pitched vocals, which focus almost exclusively around the chorus hook. It’s a decent tune, although one of those ones where I find myself thinking, “I wonder if there’s a remix?”

The Amazing Snakeheads are a strange musical footnote in 2014. Being a much-hyped, rock’n’roller type outfit before two of the members left, leaving singer Dale Barclay to find a new drummer and bassist. They’ve no doubt helped the likes of Slaves get picked up by Virgin and thrust all over Jools Holland, although ‘Can’t Let You Go’ unfortunately doesn’t feel as dangerous as much of debut record ‘Amphetamine Ballads’ did. Indeed, it feels more like a mime of their post-punk influences than a useful reworking of them. If proof was needed that amphetamines produce an initially interesting result, before turning sour, I think this could be it.

Laetitia Sadier – Release From The Centre Of Your Heart

‘Release….’ doesn’t sound much like a single from 2014, more like a theme tune from a particularly cultish ’60s James Bond offshoot. Even the smoky graphics of the video scream True Detective: The Retirement Years. I actually referenced True Detective last week as well, for the Miss Kenechi track ‘The Ghost’. Sadier isn’t close musically (instead of dark desert blues, huge strings sweep along a kitsch rhythm section a la ‘Windmills of Your Mind’) but follows the story-telling theme with the lyrics, projected with a voice that balances a very, very thin line between chocolate box sweetness and easy listening appeal. I don’t quite know what to make of it – it sounds about seventy years old, and while that’s not a problem in and of itself, such obvious retroism is a little startling.

While pop continues to edge into dance, it seems that dance is continuing to edge towards pop. Shy FX and B.Traits’ Digital Soundboy label has released this latest single from Breakage, a peculiar ‘no drop’ sort of club banger. The synths have more sheen than a Toilet Duck advert, drums conspicuous by their absence, the vocals accessible enough without having to do that screamy ‘LOOK I CAN SING REALLY WELL’ thing (which has to be the X Factor’s infamous legacy). It’s not awful, but it does suck the subtlety from the ‘minimal with vocals’ electronica niche.

Ed Harcourt – The Way That I Live

Apparently this has an outside chance of being Christmas No. 1, which is nice because at least it’s not emotion-porn X Factor horribleness, although it is battling with whatever John Lewis put on their advert as sponsored music content (this particular track has gained traction after being featured by Burberry). Considering I’m a fan of The National, the lyrics do seem a little moany, and I’m not totally convinced the character in the song is the real life Ed Harcourt, but saying that the music is nice enough.

In true Mogwai style, ‘Teenage Exorcists’ leaves you with no doubt about their cinematic intent from the get go. The (surprisingly brief) four minutes of melodic post-rock leaves you half uplifted, half out of breath. There must be something in the water in Scotland at the moment following the referendum debates, with these guys and Twilight Sad both recently releasing big, atmospheric, emotional rollercoasters of tunes.

WACO’s debut single might have the chirpy aesthetic of a college house party (or a piss up in the woods, as the video alludes to), but the lyrics reveal the slightly more downbeat internal thoughts of pretty much everyone at the party. The juxtaposition makes the track a lot more interesting than the genre normally allows for, and luckily isn’t angsty enough to sound like whining. Well formed party punk then, expect sing-a-longs to take place at Reading & Leeds 2017. 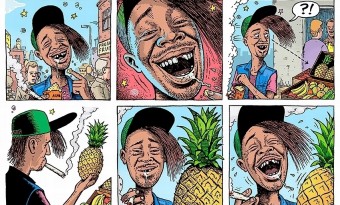 As everyone's favourite high-pitched rapper prepares to play London this Saturday, we run down five of his greatest collaborations from Busdriver to Rustie.
Read More