What we expected to be a night of soulful swaying turned out to be beautiful havoc. With the majority of crowd being between the ages of 16 and 25, events during this concert took an unexpected turn – but let’s talk about everything else that occurred first…

The Leeds Irish Centre is probably a controversial space to hold any kind of concert. More usually hosting weddings and large dinner celebrations, it was clear that the venue was not well equipped for a crowd of young ‘adults’ eager to listen to their beloved Mac DeMarco. Nevertheless the contrast was obscurely fitting, from the 1970s décor to the band itself. 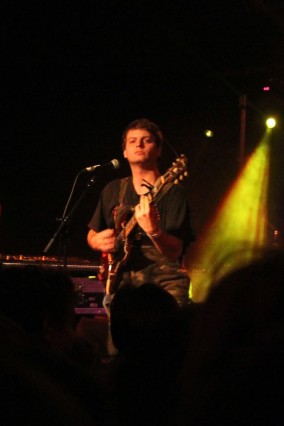 Starting off was Juan Wauters, giving off some folky NYC vibes to prepare the crowd for DeMarco. A well-adjusted warm-up to the night was not acknowledged enough by a difficult crowd who were solely there for the person they paid and travelled to see. After some half-hearted applause, in stark contrast to DeMarco’s reception, Juan Wauters concluded with some classic guitar chord progressions, accompanied by tapping drums and playful Spanish inserts. Sporadic shout-outs from fans were now taking place as DeMarco’s band began setting up on stage.

And then, as Mac DeMarco initiated with ‘Passing Out Pieces’, fists were enthusiastically thrust into the air and the expected gentle swaying commenced. Bassist Pierce McGarry looked like a proper cool cat, sporting black sunglasses indoors, and along with Mac’s camouflage jamboree was successful in setting trends. The band cracked jokes midway through the performance, keeping the crowd entertained and lively enough to accept crowd-surfers with open hugging arms. Midway through, Mac DeMarco brought out Juan Wauters, thanked him for touring with the band and threw him into the audience to be embraced by the cuddling crowd.

With such an embracing, passionate vibe, gentle moshing was a given. Unfortunately, given the ‘lad culture’ attitude of the majority of the crowd, gentle moshing soon turned to testosterone-fuelled pushing competitions. At the last gig I went to – Nine Inch Nails in Manchester – there was a proportionately bigger crowd and the moshing, while quite rough, was not as aggressive or violent as how it nearly turned out in the Leeds Irish Centre. The ‘lads’ had begun to mount the stage and take selfies while being booed and called off by the rest. 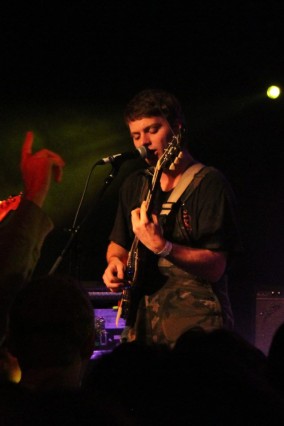 Despite the band’s initial reaction, welcoming the odd fan onstage, things took a turn for the worse when 20 fans rather than 3 conquered the stage. Security guards and the band members themselves politely urged fans to get off stage so what was a wonderful performance could continue. But given the banter and ostentatious attitude of the majority of ‘lads’ at the front, the band then became quite annoyed and began shoving people off stage. Despite the brilliant performance, vocally and instrumentally, it was clear that after the incident the gig was nearing the end.

My friend and photographer, Sam Boullier, and I met with the band backstage later on, casually conversing over beer and cigarettes. The backstage was flooded with fans that had snuck in, however by that point the situation was more restrained, and so we had a good 10 minutes to chat. Naturally, our first topic was what happened a few moments before the show had ended. Mac DeMarco, being suave and quite charming, stated in a nonchalant way that they never like putting barriers up between them and the crowd, and they embrace it when the crowd gets on stage to surf; however, what had happened tonight was ‘intense’ and ‘too much’. None of the band expected such a small crowd (despite selling out the venue) to engage so enthusiastically but also so aggressively. They implied that it was an experience for them (as much as it was for us) to witness a crowd becoming so hostile to such laid-back and carefree music. 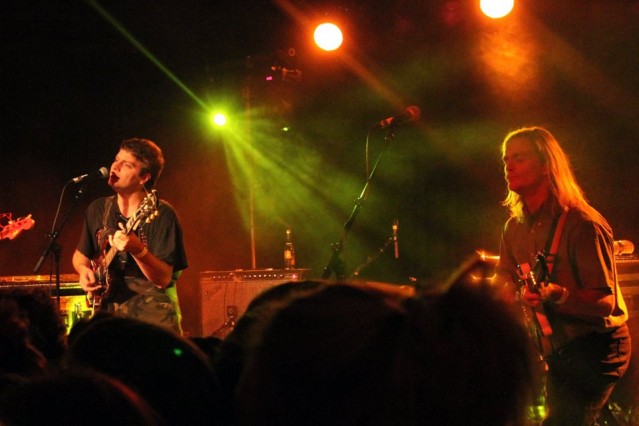 By this point, seeing as the backstage fan-flood was immense, DeMarco made a sly exit, leaving the band to be confronted by talkative and excitable fans, primarily looking for Mac. The dust settled, and we spoke to the band members a little bit more about their tour. They seem like the most down-to-earth people, very different from their personas on-stage, but still friendly and welcoming. We found out that their videos are made by Mac DeMarco and Pierce McGarry and that ‘goo’ is almost always involved, and disgustingly pleasant to them. Soon enough it was midnight and we had a train to catch, so we made our way off feeling completely overwhelmed by everything that had happened, including the wonderful performance and personality of the band.

I hope to see Mac DeMarco again, this time sporting my fan-girl tour T-shirt, and share that experience with a completely non-‘lad’ crowd of strangers, where we can all just hug each other and reach nirvana. 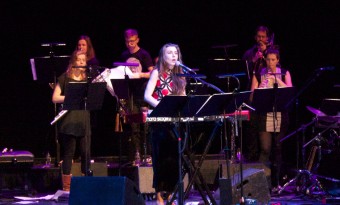 A Julia Holter performance the like of which you've never heard before, as she's joined by Berlin ensemble s t a r g a z e for a stunning chamber recital of her work...
Read More