Last year we had a crisis of confidence at Monitors HQ. Probably at some point around lunchtime, while contemplating the crusts and cheese rinds that constituted our lunch menu. Again. We couldn’t understand it. How come when we all worked so hard we never had any cash? Perhaps we just weren’t money-orientated enough.

Clearly we needed to summon our inner Alan Sugars and start raking up dollar like there was no tomorrow. Or, rather, like there was a tomorrow but it had a very high cover charge. To this end, we started playing money-centric music in the office to encourage us; DR Period’s ‘Money’, as heard in series 4 of Breaking Bad, became our unofficial anthem as we started filling out our gold card application forms.

Hmmmm. Still, if there’s one part of their budget we definitely can approve, it’s the slice they used to fund this superb video. Featuring the pair played by puppets, perched on bins down an ice-white back-alley, its simplicity only heightens its effectiveness. The line drawings that illustrate the lyrics are fantastic, while the deadpan expressions on their faces and smooth synchronised moves are sublime (witness the bad-ass head shaking at 1:01). By the time the friendly neighbourhood worm is jumping for joy while the cash rains down, you’ll be bouncing right along with it.

Eventually the track ends, and both you and the puppets are forced to acknowledge the somewhat less salubrious surroundings that exist outside the realms of fantasy. Still, as long as people are creating stuff like this, we’re all a little bit richer. “I even own all the ice in the Sprite you just dropped,” boasts Rob Sonic at one point, but all he and Aesop will be dropping after this is the mic. 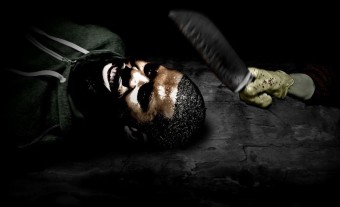 In which FlyLo enlists cult animator David Firth (of Salad Fingers fame) to create a Halloween horrorshow, and is repaid by having his skull cleaved in two.
Read More