Love/hate would be an easy way of explaining my relationship with the music of Ariel Pink. I’ve always followed his recordings, appreciated the fact he pushes forward without compromising, and generally doesn’t quite fit. However, it’s eternally frustrating when he constantly falls short when performing live. I recall seeing him play Primavera festival a few years ago where he honestly mumbled through the entire set and had no idea where he was, who he was or what he was.

Let’s say he also doesn’t come across as humble, judging by his recent comments about Madonna and Grimes (“Maybe she’s angry that I’m the male version of her, who was at 4AD before her”), and he’s dissolved the Haunted Graffiti band who made the previous two records, Before Today and Mature Themes, so appealing. “Even though it’s my first record released as a solo artist, it’s my least solo recording,” he said. However, the record sounds as if it is just Pink and he sounds as if he was left to his own devices without any filter or edit. It’s 17 songs and runs 69 minutes long.

Pom Pom is what you’d expect. A selection of quirky, short, silly, sweet and seedy songs which sound as if they could have been recorded between any time between ’60s-’80s. Opener ‘Plastic Raincoats in the Pig Parade’ bounces along whimsically – “mannequins are so afraid” – and the synth-led ‘White Freckles’ sounds warped and disturbed. ‘Lipstick’ oozes sassy ’80s sleaze-funk, as he demands, “Where are all the girls now? What is this? What am I? What is this!”‘Not Enough Violence’, one of the record’s stand-out tracks (and longest) propels to a breakdown in a primal stomp, with Flight of the Navigator twinkling notes, and eerily comes back in with some bass notes that hark back to Plaid at their most uneasy and wonderful best before kicking back on its last run. It’s exhilarating when it comes together.

The infectiously catchy ‘Put Your Number in My Phone’ explores the further notion that Ariel actually isn’t the most committed lover, and is downright hilarious as he lovingly serenades the object of his affection to “Make the most of this true love” over a summery ditty, before the song plays a recorded message asking why Ariel hadn’t gotten in touch before being cut off by the chorus. Pretty funny but let’s face it, actually pretty dickish.

Unfortunately such moments are few and far between, and Pom Pom is a scatterbrain of different ideas which have no cohesion or don’t get the chance to fully form or develop. ‘Nude Beach A Go-Go’ channels his inner Brian Wilson, only without the harmonies. Or innocence. ‘Goth Bomb’ is a throwaway punk song. ‘Jell-o’ sounds utterly ridiculous. ‘Dinosaur Carebears’ is a creepy montage of different styles from Fisher Price electronics to off-beat reggae but with no heart to pin it to, even though he sings: “She loved me.”

You try to separate the person from the music but it’s hard to really ‘feel’ anything for the songs and the way they are presented. You hear him talk about girls, love, penetration, being the “sex king on the velvet swing” and a “sexual athletic” and you can’t help but feel it’s not actually funny. Just strange. Especially when he’s been noted recently for saying: “Everybody’s a victim, except for small, white, nice guys who just want to make their moms proud and touch some boobies.” Or how he recently revealed how he was maced in the face by a woman in LA after an argument over who would pay for lunch. Or that time he got Jessica’s number on his phone at the Taco Truck, South Lake and never called her back. And when she called back and left a message, and he put it in a song.

Pom Pom is supposed to be the maturation of Ariel Pink (36). “My life project is to chill out and grow up,” he said. Unfortunately, by the sounds of things, he’s still a long way off that aim. 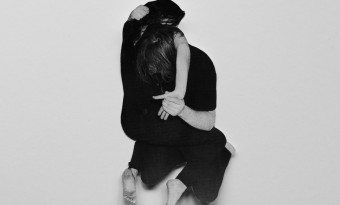 Wildbirds & Peacedrums strip their sound down to the very basics on new album 'Rhythm', and it sees the husband and wife duo push each other further than ever before...
Read More