Remember that time in your life when you would go over to a friend’s house and find yourself still there three days later, surrounded by empty tins, spliff roaches, wearing the same clothes, and having scrawled all kinds of odd, seemingly-profound statements in a silk-bound diary? With beads of sweat congealing from the tips of your hair? Though the visually discernible grime on your face instilled an understandable dose of self-loathing, there was still something rather beautiful about the fact that you’d gladly eschew productive labour, polite society and sunlight to sit and natter for days with the people who actually matter to you.

Melbourne’s King Gizzard & The Lizard Wizard offer up the chance to return – if just briefly – to those heady days with their nostalgia-riddled psychedelic rambles, complete with harmonica solos, trilling flutes and ten-minute long riff repeats. Not one, not two, but three guitars combined to create their mesmeric compositions. Plus two drummers. I don’t think I’ve seen a live act with two drummers since the days of hair metal (except for Boredoms – but they’re a whole different kettle of fish), but seeing the two of them beam at each other while percussively sparring was utterly endearing.

All seven boys, dressed in grubby plain t-shirts, jeans and unkempt hair, looked like they’d just rolled out of bed (possibly roused by an exasperated tour manager/parent). And it fit perfectly. You wouldn’t want a real rock and roll band to wear expensive suits, would you? High production Lady Gaga-esque theatrics this was not. And fair dues to them. The walls of the Shacklewell Arms – an East London venue large enough for 200 people – were pouring with sweat by the end. The crowd – addled, drunk and adoring – were moshing from the get-go.

There wasn’t much about their set that was innovative or terribly original, to be fair. Every trope – from the Moog synthesizer chords to the unflinchingly repetitive bass-lines, would have fit in perfectly at a jam session in the ’70s. In a sea of handlebar moustaches, leather jackets, scruffy hair and – yes really – bandanas, your dad would have probably felt right at home at this gig. It instantly recalled memories of Ten Years After’s set from Woodstock (with a bit of Canned Heat and Jethro Tull thrown in for good measure).

But, frankly, there’s nothing wrong with reviving blues-infused amphetamine-laced psychedelia if you do it well. The music worked the first time round for a reason. And in the breathless, attention destitute internet age, sometimes it’s nice to just zone out and enjoy three notes over and over for a change.

And hey: if you manage to get a mosh pit going – complete with crowd surfers grabbing the projector cables from the ceiling, hanging off the rafters and falling head-first onto the concrete floor – from 45 seconds into the first song, then you must be doing something right. 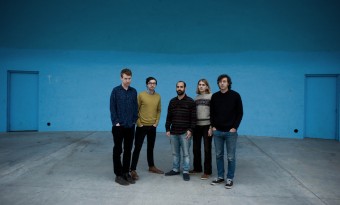 Real Estate may have the comforting predictability of a Hollywood chick flick, but the guaranteed happy ending is only one of many delights they offered Shepherd's Bush...
Read More