If The Knife are known for anything, it’s giving people something they probably haven’t seen before. Or even heard. Across the past fifteen years they’ve become the monarchy of left field (and left wing) electronica, from their own records to their experimental ‘opera’ with Mt Sims and Planningtorock, and side projects Fever Ray and Oni Ayhon. It’s fitting then, that at the peak of their powers, the self-appointed outsiders have decided to call it a day, declaring the last round of Shaking The Habitual (Shaken Up) shows their last ever.

2013’s Shaking The Habitual show kicked up a bit of fuss because the Scandinavian duo let loose any pretensions of ‘playing live’ and instead presented their last release by having a dance troupe perform to the music. It was a technicolour glory in an electronic music scene obsessed with watching someone fiddle about on a laptop, and once everyone got a sense of humour we all managed to get in on the joke. Keeping the experiment but deciding to bring back a bit of live action, this show saw the group return to crashing some drums, playing some xylophone and something I think was a mouth organ, and very definitely singing live.

This night’s sold out Brixton Academy crowd were welcomed by the sight of a stage set which can only be described as a cross between TRON and a Terry Gilliam dreamscape – luminous lighting highlighted five platforms which hugged the stage from behind. Giant metal sewage pipes reached up at the back (sometimes utilised as percussion), while the lights throughout were designed to give the show as much of a club aesthetic as possible.

After the performers came to the stage to rapturous applause, they kicked into what was to be an hour-and-a-half melee of tribal rhythms, psychedelic techno, those idiosyncratic North European vocals and a wash of colour and physicality. The ghost of Björk rested heavy on opening tune ‘Wrap Your Arms Around Me’, spooky noises rising from the ensemble around a clatter of drums.

The cast acted more as a musical then a set of musicians. Especially when viewing the show from the mezzanine, as I got the added effect of the Academy’s internal grandiose framing; a bit like an entrance to a house on Downton Abbey, with trees even etched into the stone. The whole show – from the endlessly visually appealing dance routines (encompassing everything from expressionism to sexual politics, denoted by various dancers going off stage with partners after miming an orgy), to the ferocity and noise of the pounding drums – felt as operatic as it was electronic. Mid set one of the chorus performed a rendition of Jess Arnets’ ‘Collective Body Possum’, with the speaker declaring “I want a body that I can live in […] An anti-toxin, a counter agent, to every shade of sex abuse slinking back from generations / I want a body that’s not afraid to fuck, and to be fucked”.

It wasn’t like the show lacked any subtleties though. The onstage laptop had a moving screensaver which matched the lights on the stage, while in the final movement – when the performance turned into what I imagine The Warriors would look like if they went clubbing – the floor lighting projected the gay pride rainbow flag on the floor. Introducing the final ‘club’ scene, they even broke out into brief rendition of ‘Rhythm of the Night’, before cracking into the wide-eyed ‘Silent Shout’, with its interloping synth rhythms and 4/4 beat building up to the final hurrah.

If it at times felt a little like a disco Spinal Tap, it got away with it because of the honesty and integrity of the performance. The show wasn’t lacking pure fun (much of the set was taken from 2006’s Silent Shout, giving the whole thing a not-as-weird-as-it-could-be dance element), and the slight ridiculousness of the overblown production values was just tongue-in-cheek enough to balance out the the otherwise worthy, although weighty, political elements (which has always been what gives The Knife the perfect balance on record, too).

Hopefully this whole quitting malarky is some sort of in-joke, as it’s a sad thought that The Knife might never give us anything to watch or listen to again. Otherwise, it might just be the best goodbye anyone’s ever given. Keep on shaking it. 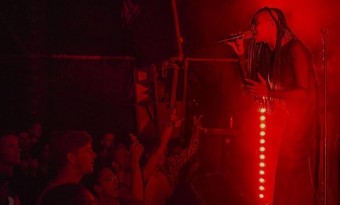