Within seconds you can hear it. The jazzy drums, the plunging bass, the invitingly discordant organ… we’re in early Broadcast territory and no mistake. And throughout the rest of 8, the noise made by the people involved in this blind date of an album, Halasan Bazar & Tara King th., never travels far from this key influence.

Which is fine. As legendary dancer Martha Graham once said, “If you’re going to steal, steal from the best,” and Broadcast are easily one of the best bands of this century. So good, in fact, that it’s impossible for them to truly be replicated. As good as 8 is, it doesn’t quite have that esoteric, otherworldly essence that gives Broadcast records the power to take you away from a heaving, stinking Megabus and into a bucolic waking dream that’s ever-ready to shift into a Pagan nightmare (especially when accompanied by a palmful of sweaty mushrooms, although you may have to trust me on that).

However, while they may not conjure some of Broadcast’s more abstruse visions, Halasan Bazar & Tara King th. manage to add something new to the brew with this collaboration. Namely a wider cast of intriguing characters, and a healthy dollop of Lee ‘n’ Nancy vocal interplay courtesy of vocalists Fredrick Rollum Eckoff and Béatrice Morel-Journel. The resulting concoction may not cause you to lapse into a shamanistic trance wherein you’re encouraged to give up smoking by your spirit animal, but it still makes for a tasty cuppa.

Instrumental opener ‘Coeurs Croisés’ sets the scene with a psychedelic carnival caper akin to those enjoyed by Maston, before ‘Rot Inside’ introduces that dusty duet for the first time in fine fashion – imagine a doomed romance between Holly Golightly and The Handsome Family’s Brett Sparks. It’s title suggests there’s something sinister lurking at its heart, but despite the lurching semitone swerves of the chorus it remains delicious.

‘Ventolin’ is also significantly sweeter than you might guess, and certainly a lot more accessible than its Aphex namesake. There are shades of Stereolab to its kaleidoscopic vibes and haunting melodies, and it segues nicely into the more cinematic ‘Beneath the Golden Tree’, which reaches a surprisingly sexy spoken word climax. Well, it’s sexy up until the point where Eckoff’s “Where I found you” refrain develops into “Where I found you… dead.”

The collaboration was suggested by Moon Glyph label boss Steve Rosborough, and he clearly makes for a canny matchmaker; the quality handiwork exhibited on tracks like the bluesy ‘Below Your Deepest Expectations’ and quirky ‘Door Wrap’ seem way too polished to have been achieved in a week. Ideas were admittedly exchanged via email before they started recording together (in a makeshift studio in a French disco dating from the ’50s), but there’s a chemistry to Eckoff’s plaintive pleas on ‘TK16 pt. 2’, beautifully complemented by Morel-Journel’s haunting backing vocals, that can’t be faked.

The album culminates with the freest track on the album, ‘Try Their Best’, which wafts along on a gentle indie breeze to begin with before being whipped up into a squalling Velvets-y instrumental, full of whirling organ and scratchy solos. Like the other eight songs on 8, it’s not offering anything new, but it’s offering it with a verve that few others can muster. The unburnished production also adds to the record’s charisma, meaning that Halasan Bazar & Tara King th. often recall the likes of sixties originals Elephant’s Memory rather than the bands, like Broadcast, that they influenced. 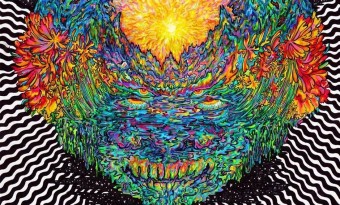 Armed with all the sweetness and savagery of Willy Wonka attacking Oompa Loompas with a cattle prod, the debut album from Meatbodies﻿ is an assault on the senses.
Read More