First signed in 1998, festival darlings Goat spent years lurking around before finally coming clean in 2012 with their challenging and critically acclaimed debut, World Music. I missed the Goat boat the first time around, unconcerned when the album started circulating. For all the hype and adoring praise piled on to the Swedish band’s first effort, I was put right off by all the talk of theatricality, cultish masks and costumes; groups in costumes make me think of Kiss, gimmicky boy-bands in velcro and The Wombles. As World Music plundered its way through every orifice and turntable in the land, I was forced to slowly resign my snobbish preconceptions and actually give Goat a chance. I have many kind words for Goat’s first album, having swiftly eaten mine.

Following the release of the live album Live Ballroom Ritual last year, the enigmatic Swedish ensemble return this month to a gleeful, exceptionally enthusiastic fan base. Goat are one of the lucky few groups who have managed to build an unparalleled reputation as a live band without falling flat in the studio. It is tricky to balance the expectations between extravagant live performance and hype-fuelled LP releases, but Goat have managed to strike this balance. Commune is a rich and sprawling offering of nomadic new age psychedelia, a superb second studio album and a lucid document of Goat’s increasing might.

While the progressive nature of their music is unique and special, that is not to say that there aren’t strong traces of traditional musical influence, albeit twisted beyond recognition. ‘The Light Within’ and ‘Talk To God’ retain the internationalist aesthetics of the first album, postmodern mishmashes of ethnic folk notation and rhythms. The Eastern tie-dye jangle of ‘Hide From The Sun’ sounds like a superior Brian Jonestown Massacre ripping off the Stones, like what Anton Newcombe could have been if he wasn’t held back by being such a twat.

‘To Travel The Path Unknown’ employs inbred banjo-plonking and ethereal arrangement to produce what can only be described as a psychedelic neo-folk instrumental (imagine if Shane MacGowan had replaced drinking and The Dubliners with Mandrax, peyote and Roscoe Holcomb). ‘Words’ is an electronic number that retains the band’s characteristically dirty organic majesty with a suitably mangled and rude guitar solo. The menacing percussion breakdown at the end of ‘Words’ is one of the best tempo changes of the record, and a great example of Goat’s ability to change their colour scheme at the drop of a hat.

A chunky bass line, bombastic guitars and skittish percussion combine to make ‘Goatslaves’ one of the most memorable tunes on the album, while companion piece ‘Goatchild’ is the most conventional and boring, the only track that hangs from the coat tails of classic psychedelia without really adding anything new. The sharp, blackboard-scraping vocals can take away the comfort from tracks like ‘The Light Within’; however, this joyous screeching never fails to thrill and always injects an uneasy excitement.

‘Blondeye’ repeats itself with swells and stumbles, rising in speed and texture until its climax. The sprawling and fantastic ‘Gathering Of Ancient Tribes’ is dense with fat riffing and a typically filthy guitar solo. Both of these songs demonstrate Goat’s generous servings of droning rhythmic repetition and atmospheric textural embellishment.

Rife with love, menace, malice, trickery and joy, Commune is yet another other-worldly record from an other-worldly group. For all the costumes, masks and theatrical tomfoolery, Goat’s unique brand of sweeping electro-Syd Barrett experimentalism is sure to endure if they can keep up this storming pace. Like World Music, Commune is a diverse and eclectic collection of songs, a glorious merry-go-round of wondrous androgyny that will keep you on your toes. I promise. 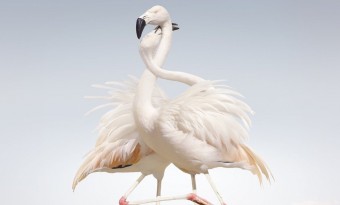 Rustie's second album has nothing to match the Buckfast-on-the-waltzers thrills of his celebrated debut - so what can it offer? Jamie Miller investigates...
Read More