This weekend, Salford’s most venomous son sauntered into the brand new Fibbers with yet another incarnation of his weather-beaten band, The Fall. Hex Induction Hour, Dragnet, and The Wonderful and Frightening World Of The Fall have been woven into the fabric of English indie consciousness and Mark E. Smith remains one of the last truly original and distinctive frontmen in rock music. Smith has managed to keep his factory line of experimental, intelligent and polarising rock and roll rolling since 1979, maintaining a fiercely working class proletariat perspective despite years of ‘poncing around’ with poetry, ballet and Albert Camus novels. The patron saint of bastards’ appearance in Yorkshire saw shoals of assorted oddballs and earnest Fall fans descend on Toft Green in a wave of Adidas Classics, balding heads and beer bellies.

This latest Fall has two drummers, a bass player, a suitably victimised guitarist and a very drunk Mark E. Smith. Gone are the days of beautiful Brix and commercial viability; the new Fall are loutish, loud and ugly. Mark has always benefited from a female presence in and around The Fall, and has become famous for using wives and girlfriends as managers and keyboard players. At Fibbers, there was no love interest to save the band and the audience from Mark’s domineering testosterone and alcohol-fuelled antics. The antisocial elder statesman carries with him a prickling air of menace, insolence and attitude. While Smith may have softened with age, he is still a cantankerous old fucker to say the least.

An intoxicated Mark struggled to read his lyrics from a crumpled notepad, which he would occasionally roll into a weapon with which to attack his guitarist, who seemed to take the physical abuse in his stride (chances are he’s seen the back of Smith’s rolled up notepad before). When not slapping him with paper, pushing him out of the way or generally bullying him, Smith would fuck with his poor guitarist’s amplifier, making it harder for the musician to hear what he was playing and thus easier to fall into Mark’s trap of swift punishment. At times the guitar was turned down altogether, and a worried looking bass player and the double drummers were forced to carry the band as Mark frequently disappeared into the side of the stage, presumably snoozing or plotting ways to embarrass his guitarist further.

Mark’s scathing constitution was also extended to the audience, and at one point I found myself locked in an awkward stare-off from which I refused to back down, despite my better judgement. Holding out his arms like Jesus on the cross, Mark glared at punters one by one, fixing his insolent thousand yard stare on the crowd, apparently trying to separate the men from the boys. Mark E. Smith is the only frontman I have ever seen perform who is likely to play you a great rock and roll show and then steal your dinner money afterwards.

But this is part of his charm, the pulling power and salty cult appeal that has kept him in the business since 1979. While many lyrics were simply inaudible, his strength and power as a singer is undeniable. In his old age, his voice has become stronger, more lairy, greasy and nasal; Listening to Smith at close range is like having your ears smacked with a filthy chip shop dish rag. Mainly due to the fact that I haven’t heard the new album and because many of the songs were unidentifiable, I am simply unable to provide a reliable setlist for The Fall at Fibbers, but I imagine Mark E Smith is too.

His tight backing band looped and rolled around the crunching, repetitive drone structures which form the functional basis for Smith’s loose freeverse ramblings. Refusing to play the crowd-pleasing classics of days gone by, The Fall continue plodding along, touring new material with a militaristic progression. For all the mythology surrounding his barbed and bizarre persona, Mark E. Smith is probably the most hard working and consistent rock writer still in the business. The world of Mark E. Smith and The Fall is as wonderful and frightening as ever. 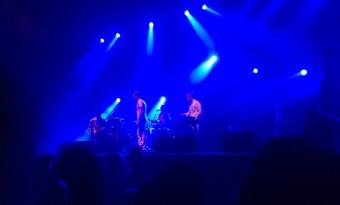 Caribou managed to defeat the fire marshals and bring the 'Sun' indoors during another sterling set at FYF Fest in Los Angeles...
Read More