As we’ve mentioned several times before, the Bad Vibrations crew are some of our favourite promoters in London. Not just because they have excellent music taste, but because they treat bands like human beings rather than simply a potential conduit to higher bar takings.

When not spending their time snaring ridiculously good bands (recent bookings have seen the likes of Drenge, Metz and Fat White Family cramming into Bad Vibes’ current stomping ground The Shacklewell Arms), they’ve been busy setting up a sister record label. Their first release was a compilation of some choice live performances at Bad Vibes shows, and now we have a first studio album to go with it: the eighth record by Californian space-heads Asteroid #4.

If you’ve never heard them before, the band’s name will doubtless give you a few clues to their sound. First there’s the titular similarity to Spacemen 3, with whom they share an obvious love of fuzzy hypnoticism, and then there’s the asteroid they’re actually supposedly named after, Vesta, which is apparently the brightest asteroid in our solar system. While their mercurial new album has several peaks and troughs in terms of both texture and quality, at times it burns very brightly indeed.

There’s a Robert Plant-ish feel to opening track ‘The River’, although fortunately without any Tolkein references. Instead some mellifluous guitar-strumming bobs along as if slowly floating down a river itself, while a few sitar effects waft over from the muddy banks. Well why not? It feels like something they’ve probably played for hours at a time in weed-stained practice rooms, a heady trance-like nod into action.

A group of children then count us into the album’s first big riff, which belongs to the slamming ‘Rukma Vimana’. Apparently the Rukma Vimana was some sort of ancient attempt to build a space rocket using psychic channelling (or at least that’s as much as I could glean from Wikipedia), and the song, helped by some fantastic production, certainly feels like it could fly alongside Hawkwind’s ‘Silver Machine’ in some sort of mystical space-rock squadron. Beats the Red Arrows any day.

Abandoning the Rukma Vimana, we then parachute slowly back down to Earth, carried along by the soft Kraut breeze of ‘Ghosts of Dos Erres’ and the somewhat more forgettable ‘The Windmill of the Autumn Sky’, before finally landing on the sitar-saturated ‘Mount Meru’.

However, the terrain gets a good deal more interesting on ‘Back of Your Mind’, the crashing drums of which hack away at the redoubtable rock of the riff like a mighty swinging axe. A swooning chorus then threatens to slip off the edge before the beats flies back in – there’s even a bit that sounds like a flute impersonating a UFO. If The Asteroid #4 are attempting to replicate a lysergic experience with this album, ‘Back of Your Mind’ represents the thrilling peak.

While the pleasant but uneventful acoustic psychedelia of ‘Ropeless Free Climber’ can’t match it, ‘Revolution Prevail’ does at least attempt to launch us back into the stratosphere with some more Hawkwind-esque blasts. The album then finally leaves orbit with ‘Yuba’, a pretty acoustic number that leaves a little stardust glittering in its wake. It emphasises that, despite the label imprint on the record sleeve, there are more good than bad vibrations here; but whichever way you look at it The Asteroid #4 provide one hell of a trip. 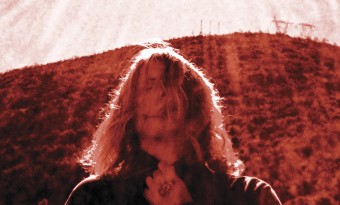 Bored of putting out a hundred albums a year, Ty Segall has decided to release one really long one instead. But do you have the stamina for 17 tracks of Ty?
Read More